A roundup of the most innovative, exciting and viral launches yet this year, from the iPhone X to Tesla's Model 3.

Every year, the world witnesses a plethora of new gadgets comprising of new and advanced technologies. While some of them maybe weird and completely useless, there are plenty of interesting and thoughtfully designed gadgets and advancements. These together form an excellent example of how best technology can be applied to make our lives easier. This year too, we saw some of the exciting new tech launches that had a substantial influence on the mass.

SpaceX made history when it successfully landed the first-stage of its Falcon 9 orbital class rocket back to Earth. In March 2017, SpaceX’s Falcon 9 rocket not only launched the geosynchronous communication satellite, but the first-stage of the rocket successfully returned and landed on a drone ship stationed in the Atlantic Ocean. With this breakthrough, SpaceX proved the concept that rockets can be safely brought back on Earth and can be reused to reduce the cost of spaceflight.

The Amazon Echo became popular for integrating smartness within the speaker systems using Alexa, company’s voice AI. The Echo responds to the wake word “Alexa”, and can perform multiple tasks for you. Right from voice interaction, music playback and setting alarms to streaming podcasts and providing real-time weather and traffic information, this smart device from Amazon offers a lot for the money. It can also be converted as a hub for home automation to control other smart devices, and the abilities of Echo are continuously expanding with each new upgrade.

Snapchat took the social media world by storm when it announced Spectacles, which are cool sunglasses that can snap! For Snapchat users, Spectacles have opened up the possibility to capture the moments hands-free. It can record up to 30 seconds HD videos, and you can easily add emojis, stickers and text just like the way you edit the snap. You don’t even require connecting a phone with the Spectacles. They can store the snaps on their own and you can use them later for sharing the story using the app.  Announced in late 2016, Snap Spectacles became available for purchase online in February 2017.

The launch of Microsoft HoloLens was one of the most exciting breakthroughs in the world of augmented reality. 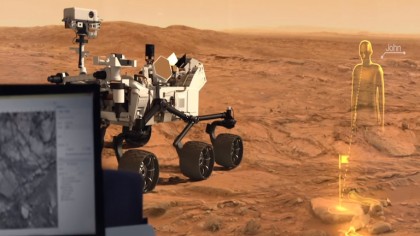 The world’s first self-contained, holographic computer (as called by Microsoft) is one of the most thoughtful developments in the field of technology this year. The device lets you engage with the digital content by projecting holograms in real environment. What distinguishes HoloLens from other VR and AR headsets, is that the device is fully self-contained and do not require connecting it to another PC or mobile. Being already applied in various industrial as well as end-user environments, the applications of HoloLens seems to be limitless.

Nintendo’s Switch remained one of the hottest pieces of tech for gamers around the globe. The Switch is a console that consists of a tablet-like device, a dock and clip-on “Joy Con” controllers that allow gamers to indulge in gaming anywhere. The controllers can be detached and attached to the 6.2 inch HD screen while on the go and can be connected back to the dock to play during the “TV Mode”. These controllers can also be detached for multiplayer gaming. The Switch is a big success for Nintendo and is today a must-have in the list of gamers.

Kuri became popular for being one of the most adorable home robots this year. But, apart from being really cute, Kuri is built with some serious technology. With capacitive touch sensors, gestural mechanics, built-in HD camera, microphones and host of other features, this intelligent home robot can do lot many things for you by responding to voice commands. The Kuri Vision feature also provides this robot the ability to capture important moments and record them. The robot doesn’t speak but responds back in the form of lights, beeps and movements. At a cost $800, Kuri has the potential to be adopted by masses, as it starts shipping end of this year.

Apple’s new iPhone launches always steal the show, and it happened this year too. However, the new iPhone X is a huge leap forward from the previous versions of the handset. Losing the home button, all-screen front and host of premium features are some of the changes that all iPhone lovers were demanding for years. Although new features such as unlocking the phone through Face ID seem to be risky for the company, iPhone X is indeed an excellent attempt by Apple towards building a perfect smartphone.

The eSight is a breakthrough in technology, providing sight to the visually impaired. The electronic glasses consists a pair of OLED displays placed in front of the wearer’s eye which shows lag-free live feed using an HD camera. The processing of the video is done algorithmically, which further enhances the brightness and contrast quality. The latest version of the glasses is lighter in weight and is much cheaper than the earlier versions. While eSight is not for everyone, what makes this launch more meaningful is its goal of improving the lives of people who are legally blind.

Fitbit is so popular that it is now synonymous with fitness trackers. With its new Ionic smartwatch, the company has developed a product that seems to be contending against Apple Watch and Android Wear. The best thing about the Fitbit Ionic smartwatch is it is platform independent and is packed with all the smart features such as contactless payments, swim function, sleep-tracking and built-in GPS, which certainly is helping the company to create its own space in the wearable market.

With nearly 400,000 pre-orders valuing $10 billion, Tesla’s Model 3 is undoubtedly the most anticipated vehicles of all time. The base variant of this all-electric sedan offers 220 miles with 0-60 mph in 5.6 seconds. Model 3 is capable of easily meeting the specs of BMW 3 Series, which is often considered as one of the best sports car available. Being a zero-emission car, Model 3 will not only be relatively cheap to run, but the company has put a low purchasing price, making it one of the best alternative over BMW 3 Series, Audi A4 and Mercedes C-Class.