Thinking about a degree in Civil Engineering? Better check out these top U.S. universities.

Civil engineers are an integral part of all the great building projects in the world – including skyscrapers, bridges, highways, airports, and water resource systems. Successful students in this field enjoy analyzing and solving problems, and they love to watch building and design projects evolve from just an idea to a full-fledged solution to a community’s needs. 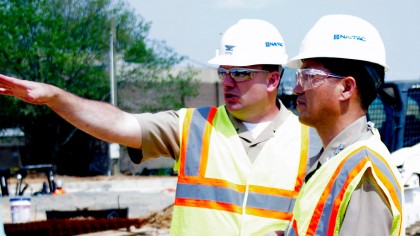 A degree in civil engineering can lead to some of the highest paying jobs in the country. The average starting salary for a civil engineer is $52,670, and the average mid-career salary is $89,420. Within the field, there are different specializations, including construction, geotechnical, structural, and transportation.

Civil engineers often work closely with environmental engineers. In fact, many schools combine these two majors into one department.

The analysis of College Factual has found these schools to be the best in the United States for students who want to major in civil engineering. To see how College Factual comes up with these rankings, see its explanation of its ranking methodology.

The salary data for these rankings comes from PayScale.

The Charles E. Via, Jr. Department of Civil & Environmental Engineering has 79 total faculty members and supports over 500 undergraduate students. The department offers a wide assortment of classes, including those in water resources engineering, geotechnical engineering, and structural engineering and materials.

NJIT is situated in Newark, New Jersey and is just a short 20 minutes away from New York City. The public research university was established in 1881, and it has grown into a widely respected university for both traditional and online learners. About 25% of the students enrolled at NJIT participate in some type of distance or online learning.

The school’s civil engineering program is a hands-on major in which students work on various building and design projects. NJIT students with a degree in this field are in high demand. Those who do not go to grad school right away, enter the workforce with average starting salaries of $55,000.

Established in 1824, RPI is “...the first school of science and school of civil engineering, which has had a continuous existence, to be established in any English-speaking country.” The school is located in Troy, New York – just a 15-minute drive from the state capital of Albany and only 2.5 hours from New York City.

Civil engineering has long been a focus at RPI. In fact, the institute was the first U.S. school to issue a civil engineering degree. As such, civil engineers with a degree from RPI are prized among employers and earn an average starting salary of $55,000.

The Department of Civil and Environmental Engineering at Berkeley is home to 50 full-time faculty members and more than 400 undergraduate students. The school also supports several active student organization for civil engineering majors that help them meet others with similar interests and participate in community service projects. Civil engineers with a degree from Berkeley land entry-level jobs with an average starting salary of $64,000.

UC Davis is a public research university located in Davis, California, about 20 minutes away from the state capital of Sacramento. Founded in 1905, UC Davis is considered to be one of the “Public Ivies” – universities that offer an education comparable to that of Ivy League Schools at a public university price. That alone makes the school a good value for your money, especially if you’re an in-state student.

Civil engineering majors at UC Davis prepare for their future careers by taking courses that include subjects like structural analysis and design and water resources management. They also have opportunities to participate in internship and study abroad programs before entering the workforce. The average starting salary for a civil engineering major from UC Davis is $60,000.

Carnegie Mellon is a private university in Pittsburgh, Pennsylvania, just three miles away from the busy downtown of Steel City. The school was established in 1900 through a $1 million donation from philanthropist Andrew Carnegie. Carnegie Mellon continues to grow and is in the midst of its largest expansion since its founding.

The Department of Civil and Environmental Engineering at Carnegie Mellon provides lots of opportunities, including internships and study abroad programs, for students. Because of this, majors in civil engineering are attractive to employers, and graduates typically earn average starting salaries of $60,000.

Stevens is a private university located in Hoboken, New Jersey, just a 10-minute train ride away from Lower Manhattan. The school was established in 1870 from a bequest from inventor Edwin Augustus Stevens, and it continues to be a hub of innovation today.

Established in 1885, Georgia Tech is a public research university located in Atlanta, Georgia. The school is considered to be an excellent value – especially for in-state students – due to its reasonable net price and its outstanding academic programs. Georgia Tech is ranked 2nd for overall quality among all the colleges in Georgia.

For those who are interested in advanced degrees, Georgia Tech has a BS/MS program in which you can earn both degrees in five years. The School of Civil and Environmental Engineering also offers undergraduates lot of opportunities to study abroad, co-op, or work on research projects. Majors in the field enter the workforce with an average starting salary of $52,000.

Located in Stanford, California, Stanford is a private research university that was founded in 1885. In addition to its standard curriculum for civil engineering majors, the university has numerous summer research opportunities and study abroad programs for interested students.

Stanford’s commitment to academic excellence isn’t limited to the civil engineering program. The school is ranked 7th in terms of overall quality of all universities in the United States. Civil engineering majors receive a high earnings boost and typically make an average of $66,000 when first entering the job market.

MIT is a large, private university located in Cambridge, Massachusetts that was established in 1861. On top of having the best civil engineering program in the country, the school is also ranked as the 8th best overall in the nation. MIT’s outstanding 3-to-1 student-to-faculty ratio makes it easy for future engineers to work closely with the college’s experienced faculty.

The Department of Civil and Environmental Engineering at MIT is respected worldwide for the breadth and depth of its degree path programs. Its environmental engineering program is also ranked as one of the top 10 in the country. Graduates with a degree in civil engineering from MIT go on to careers with an average starting salary of $68,000.