We all reach a point in life when we need to swallow our pride and ask for help. Here are 10 perfect examples of senior citizen tech fails.

Everyone has been asked to help their elders with some form of technology. In the modern computer age, our grandparents are getting more and more involved with technology. With that in mind, here are ten of the funniest senior citizen tech fails on the internet.

1. A broken clock is right twice a day

We'll kick off our list of senior citizen tech fails with a 'bless her' moment. This chap's grandmother asked him to help fix her phone as "the outside clock is always showing the wrong time". A quick assessment of the situation reveals the root cause.

To be fair we've probably made similar mistakes in the past, or perhaps not, but you can understand her confusion. The problem is now she might think the phone isn't working at all.

Here's another great example of a senior citizen tech fail. This fellow's 90-year-old grandmother, from Japan, clearly hasn't been told about zooming in on her phone. To be fair there are not many zoom features for reading text messages.

So perhaps her solution is actually pure genius. It does, however, seem so out of place that we couldn't resist adding it to the list.

Here is another example of a senior citizen tech fail that most can probably relate to. It also opens up some probing questions about modern smartphone designs. Have they, in fact, had their cosmetic design influenced by scientific calculators?

This kind of resemblance to one another easily explains this chap's friend's grandmother's confusion. In retrospect, this is a completely understandable mistake to make.

To be fair, this one is easily done, at least for the first attempt. Perhaps it's this person's mother's very first camera-equipped phone?

This user's grandmother is surely one of the most polite around. She takes the time to be polite even when asking a machine for assistance. Her grandson found this out when opening her laptop to find she wrote please and thank you for her Google search.

We think Google need to alter their search algorithms to reward such politeness from their users. Perhaps that would, in no small part, greatly improve the manners of many on the Internet.

This young man's grandmother is quite adept at surfing the net. We love her dedication to the task and attention to detail. How many people out there would bother to write by hand the full web address for a website?

We've seen it printed, but this is the kind of task you'd punish a belligerent child with. In any case, this is almost a work of art in its own way. Fair play to her. 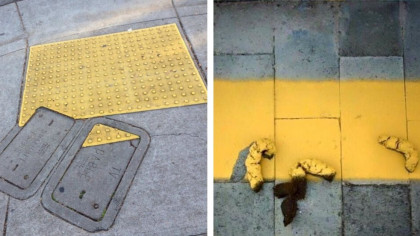 15 Best "Not My Job!" Images on the Internet

Manufacturers tend to take it for granted that users want a plethora of options and functions on their devices. For the older generations, this might well be counter-productive. The next entry on our list of senior citizen tech fails is a prime example and one we can all appreciate from time to time.

This lad's grandmother complained that her remote control was very confusing. To be honest they generally are. How many of the buttons do you actually use? So being the loving and helpful grandson he decided to simplify it for her. What a dear soul.

8. Grandma gets into 3D tech

3D technology can be a little bit gimmicky for some and for others, the greatest way to watch a movie. This person's grandmother is a prime example, she has decided to take the plunge.

Her choice of viewing material is rather avant-garde but we do appreciate the style and design of her chosen clip-on 3D accessory. Marvelous.

This next entry on our list of senior citizen tech fails is a fantastic example of old meets new. This lady's grandmother, having invested in some new tech, decided to show her granddaughter just how tech-savvy she was.

After taking a selfie she, bless her heart, decided to send her beloved granddaughter the picture. However, her delivery is far from what you might expect. She is probably the greatest grandmother in the world.

Last but by no means least on our list of senior citizen tech fails is a doozy. This eternally suffering grandchild was tasked with explaining just why everything was moving backward on their grandparent's computer. To be fair if it is the first time you ever used a mouse the correct orientation might not be obvious.

So there you go, our selection of 10 of the funniest senior citizen tech fails. Do you have any suggestions? Feel free to comment below.