EVs are really starting to take off across the world, particularly with innovation in components and batteries and as the costs come down. Which EVs are the most popular across the world? Well, it depends where you go of course. Choices may differ widely from region to region, but usually there are some interesting common factors in consumer’s decision making, such as range, cost, space etc. In terms of the best range, among the contenders are the Smart Electric Drive, Focus Electric, BMW i3, Chevy Spark, Nissan Leaf and, perhaps unsurprisingly, the Tesla S85.

However, the US website CleanFleet Report listed their favorite EV manufacturers more recently as:

There is some common preferences here, from these two sources, and some others, here is a distinctly unscientific list of some of the most popular EVs in the world today, not in any particular order of course.

This was introduced into the UK in 2013 and has become a real hit among British EV drivers, accounting for about half of all the EV sales in the country. This is probably because it is the only plug-in hybrid SUV on the market so far and Brits do like their SUVs. Furthermore, it qualifies for the government’s £5000 EV subsidy and is available at the same price as the diesel Outlander version. The vehicle’s fuel economy and emissions record means that it qualifies for a benefit-in-kind (BIK) tax rate of just 5 percent. It can also be charged overnight or via motorway fast chargers. Stimulated by this success, Mitsubishi will probably be updating the model sometime next year.

This is fairly new to the EV market but it seems to have become very popular, very quickly. Part of the reason for that is its compactness but there are other factors involved such as good suspension carried over from the seventh generation Golf models. There is enough room inside the car for five with a hatch providing storage space. It’s also fast and handles just as well as conventional Golfs. 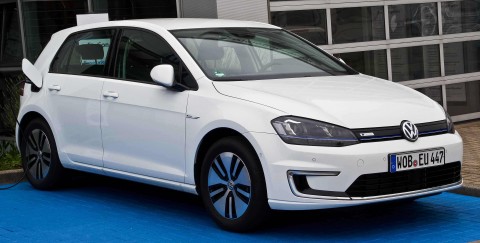 This Golf is available in five variants: pure electric, electric plus, battery hold, battery charge and auto hybrid. It is a distinctly nippy little vehicle, equipped with touch screen controls and a sound system with eight speakers. It’s a bit pricey at £33,755 but the hybrid with low emissions means there’s no tax and it’s also exempt from the London Congestion Charge. Top speed is 138 mph and acceleration is 0-62 mph in 7.6 seconds.

The Model S is currently the best-selling EV in the US. It has a range of up to 300 miles per charge and can achieve 0-60 in 5.6 seconds with a top speed of 125 mph. On the dash, it has a touchscreen driver interface with Wi-Fi internet access and a panoramic roof. This all adds to the luxurious interior which is really going down well with EV drivers. Current price is $71,070.

One of the most well-known and well-liked EVs and for that reason is rightly thought of as Nissan’s flagship EV model, particularly because it was the first EV to be commercially released in the US on a large scale. It’s perfect for those people driving under 100 miles daily and also a great choice for multi-car households. It has a rechargeable lithium-ion battery and can achieve distances of over 70 miles on a single charge and speeds of around 90 mph. The Leaf will probably be rejuvenated in 2016 with a new and larger battery and longer range. Current price is $29,650.

There are two versions of the i3 available, one of which is a typical battery electric and the other with an extended range. It’s range on a single charge is up to 81 miles but this can be extended to 150 miles with an optional gas-engine. The i3 became the fourth best-selling plug-in car in the US in 2015 and the usual price (US) is around $42,400, about half the price of a Tesla Model S.

Unfortunately, this EV isn’t available in the US but it’s very popular in Europe. It easily has room for 5 inside and has a range of 130 miles. It has a 22 kilowatt hour lithium-ion battery pack.

The 2011 Chevy Volt appeared in Europe in 2011 as the Opel Ampera and so far has proved to be very popular with several awards including the 2009 Green Car Vision Award and 2012 European Car of the Year. It appears in the UK as the Vauxhall Ampera and in Australia as the Holden Volt.  Around 19,000 of the vehicles were sold last year in the US and global sales total 95,000 vehicles. The Volt has a very aerodynamic design, Chevrolet released a second-generation model in 2015 at the North American Auto Show with an improved battery system and drivetrain. The vehicles electric-only range is currently 53 miles after which the conventional engine kicks to start charging the battery up again. Its total range is 420 miles.

This is a family of EVs and hybrids produced by Audi from 2009 with a plug-in hybrid (PHEV) version in 2012. It is a two-seat vehicle The Audi A3 Sportback e-tron became available for retail in Europe in 2014 and in the US in 2015. It represented Audi’s first entry into plug-in hybrids. Currently it has a 1.4-litre turbocharged engine with about 148bhp supported by a 101bhp electric motor in the gearbox. It generates the same amount of torque as a VW Golf GTI (350Nm).  Price is about £34,950.

The Kia Soul is a mini SUV (although the 1st generation vehicle is more correctly a mini-MPV) which the company first wheeled out in 2009. The Soul was designed and developed in California, debuted at the 2008 Paris Motor Show and is manufactured in South Korea. It has 2 bucket seats in front with flat-folding seats in the rear. These rear seats can be removed to increase storage space. The interior features include a six-speaker stereo system with CD player and a USB port for iPod connection. The 2013 version has a bulged hood, LED red tail lights, LED amber front turn signals under the headlights and white LED running lights under the front turn signals with audio controls relocated on to the steering wheel and Bluetooth. There are several special editions including the Denim, the Dragon and the Flex.

Bentley to Go Carbon Neutral by 2030 with Fully Electric Fleet