First invented in the 1950's, airbags have saved hundreds of thousands of lives. These 10 crashes are a testament to their live-saving abilities.

You probably don't give airbags a second thought when you set off on your journey but you'll certainly thank your lucky stars they're there during a crash. They are a fairly recent addition to the suite of safety features in cars and have saved many thousands of lives since they first began to appear in passengers vehicles. 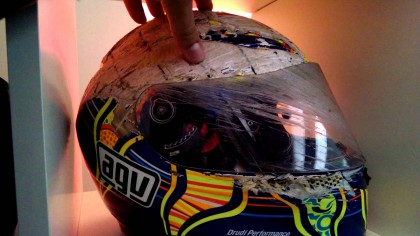 These Scary Post-Accident Photos Prove That Helmets Save Lives

Airbags work in tandem with a car's other safety features, like seatbelts, to cushion occupants' most vulnerable areas (like their head and upper body) during crashes. By doing this, they help prevent serious injuries and fatalities during car accidents.

Airbags were first invented by John W. Hetrick who registered a patent in 1951. A similar patent was also filed in Germany by Walter Linderer at around the same time.

Both used compressed air to inflate a bladder that was triggered using a spring, bumper contact or manually by the driver. The development of crash sensors during the 1960's would make them more practical and reliable and accelerate their development.

Throughout the early 1970's various major automobile manufacturers began to experiment with and install airbags into some of their models. In 1973 GE's Oldsmobile Toronado became the first car with a passenger airbag for general sale to the public.

Airbags became on an optional addition to some of their models in the mid-1980's and by 1988, Chrysler offered them as standard. The Mercedes-Benz S-Class was the first to feature a driver's airbag in 1980.

The first gas-inflated airbags were introduced by TRW in 1994 and by 1998 they became mandatory safety equipment in the United States.

Since then, airbags have saved many lives. The following selection of accidents just goes to show how important these safety devices actually are.

1. This Wrecked BMW i8 Shows the Importance of Airbags

As you can see from the state of this BMW i8 without airbags (and an entire suite of impact safety engineering) the driver might not have lived to drive another day. This ex-BMW i8 was being driven by an inexperienced teenager driver when he hit a gate and lost control.

The airbags inflated immediately, doing their part to protect him from the savage crash that followed.

2. The Six Passengers In This Accident Walked Away With Minor Injuries

On the 21st July 2016, a new 5-seat compact car struck some steel and concrete barrier poles and flipped over. When La Habra Heights Fire Department arrived on the scene shortly after, they were relieved to find that all 6 passengers had managed to exit the stricken vehicle themselves.

All survived the crash with minor injuries, thanks to the deployment of the car's front and side airbags.

3. It's Incredible Anyone Survived This Crash

The driver and all passengers miraculously, or perhaps not, survived this incredible crash on the 14th February 2015. Most were able to walk away with one suffering serious but not fatal injuries.

The vehicle was traveling along the A64 near York, England when the driver lost control and practically destroyed the car. If the car had lacked airbags the outcome would probably have been very tragic indeed.

It's amazing anyone actually survived this.

Only 1 serious injury from #RTC on the #A64 with a few broken bones but talking. Other 3 walking wounded #incrediblepic.twitter.com/tFw0WoAArF

4. Without Airbags This Crash Might Not Have Been Survivable

Earlier this year, again in Yorkshire, England, four people survived another violent crash. Their survival was a mixture of pure luck and the car's safety features - including in no small part its airbags.

Stourton, Leeds - four of the luckiest people our officers have ever seen following an RTC. Unbelievable how this did not result in multiple fatalities. Thankfully luck was on everybody’s side this evening. pic.twitter.com/e3anbtGyyU

5. The Driver Survived This Crash But Her CD's Didn't

When this musician crashed her car in 2013, the airbags deployed sparing her serious injury or worse, death. Unfortunately, this didn't mean the crash didn't cost her something close to her heart - some of her own music CD's.

Looking at the photo you can see that the airbags, on this occasion, would have only offered temporary salvation if chance hadn’t played a part

6. This Head-on Crash Could Have Had a Different Ending Without Airbags

Earlier this year in March two cars collided head-on in Linden, Johannesburg, South Africa. The crash was incredibly violent, flipping one 360-degrees in the air.

Both drivers and all three occupants between both vehicles survived the encounter with 'minor to moderate injuries'. It's thought the accident was caused when the BX driver ran a red light at high speed (and perhaps intoxicated).

The crash was caught on Suburban Control Centre cameras.

7. This Driver Survived His Car Plunged 46 Meters Off a Cliff

This driver survived his car plunging 45 meters off the notorious Devil's Slide Cliff on the Peninsula Coast. Emergency services were able to rescue him safely as his ruined automobile began to be engulfed by the waves.

From the news report footage, you can clearly see his airbags safely deployed offering him some protection from this harrowing accident.

8. This Driver Escaped With Non-Life-Threatening Injuries After Her Car Plunged Six-Stories

Back in 2011, a driver in Melbourne survived a horrendous fall from a multi-level car park. Witnesses described hearing what sounded like multiple crashes at it bounced between the car park's and neighboring buildings' walls.

The car's safety features, including its airbags, certainly saved her life.

9. This Driver Survived a 'Death-Defying' Crash

In 2016, this driver in Florida miraculously survived a very dramatic crash. The CCTV footage shows his car rolling over at least 6 times shedding parts as it went until it mercifully came to rest.

His life was saved by the car's great double-team of safety features - its seatbelts and airbags.

10. It's Incredible Anyone Survived This Serious Head-on Crash In Maine

Three people managed to survive a multiple car crash in Maine on the 27th July 2018. One of the drivers, Darren Dennison from South Portland, crossed the center line of the road and stuck not one but two cars in the process.

All three cars were a total right-off but thankfully their airbags helped save them from more critical injuries.

As we have seen airbags are vitally important vehicle safety devices. They have saved many lives since they first began to be installed in automobiles over 40 years ago.

But there just might be a way to avoid their use altogether. The problem is will we will need to drastically alter our physical form.

Graham is a hypothetical human model who could, in theory, actually survive a car crash.

He was created by an Australian road safety campaign and looks very odd indeed.

What Gyroscopes Are, How They Work, and Their Importance

Alarming Before and After Images Show the Impact of Australia's Bushfires