The human body is an incredible machine. Ironman competitors, dancers soaring over a stage and Olympic swimmers going for the gold all prove that we can train our bodies to perform nearly superhuman feats of strength, endurance and agility.

Still, despite our best efforts, there are very few things that our bodies can do that animals weren't engineered by evolution to do better, more easily and more impressively than we can. And that's why universities and companies like Festo, a major player in bionics research since the 1990s, and Boston Dynamics, an American company best known for its Atlas and Spot robots, continue to look to the animal kingdom for inspiration. 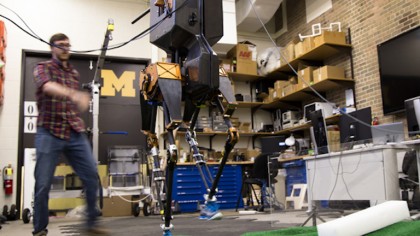 Bionic beings present a number of important implications and applications. They can help us understand actual animals better than we ever have before, animating much-needed empathy among us humans toward animals and their habitats. Multiped robots can perform seemingly simple tasks better than your average human—and human-inspired robots. After all, even MABEL has trouble covering rugged terrain at speed.

As in the case of Festo's AirJelly robot, the research and development surrounding non-terrestrial robotic animals can be used to explore and more fully comprehend scientific principles. AirJelly was conceived in part to answer questions about propulsion, the company wrote in its marketing brochure:

"Can the jellyfish’s motion through water serve as a propulsion principle for an airborne object? In other words, is it possible to glide through the air as a jellyfish swims through water? These were the considerations that gave rise to the development of AirJelly."

The special characteristics of animal anatomy—for instance, the grippy suction cups of an octopus or the flexibility of an elephant's trunk—can also be adapted for a diverse array of everyday Earth applications, from product manufacturing to surgical procedures. In addition to all these implications and applications, animal robots have evolved from clunky early prototypes to some of the most aesthetically pleasing, occasionally mesmerizing, exemplars of human ingenuity. Here are 11 of our favorite jaw-dropping bionic bots:

1. MIRO, an acronym for "Marine Intelligence Robot" is a biomimetic fish produced by the South Korean company AIRO Inc. Equipped with two motors and four distance measurement sensors, this little fish can swim in all directions, avoid obstacles and dive to depths of up to 50 meters. Pretty MIRO is becoming something of a tourist attraction, because of her colorful scales and occasional publicity stunts like swimming with sharks.

2. Robugtix T8X is the ultimate robo-toy. This big bug is rechargeable, programmable and wireless-enabled, which allows users to control its 26 leg motors remotely. T8X comes in smooth and hairy versions, and either can be yours for a mere $950. This beast may not be able to climb walls like a real spider, but it can certainly cut a rug.

3. Bionic Bird, an Indiegogo-funded project, simulates natural flight within a 100-meter range so well that it is virtually indistinguishable from real birds—even by other birds. This is due to a flexible gray foam body and anatomically correct face. This bird flies at 12mph on independent wings that beat 18 times per second, a faster wingspeed than a majority of bird species have. The best part: the portable egg-shaper charger that powers this bird's ultralight battery.

4. Pleurobot, from the Swiss Federal Institute of Technology, has a salamander's articulated vertebrae, which lets it easily traverse tough terrain. Thanks to a waterproof exterior and body parts, Pleurobot is equally at home underwater just like the real-life lizards this bot was based on. All this, combined with a sophisticated neural network and the individually controllable joints, means this slithering amphibian is a prime candidate for supporting search and rescue missions. And he has his own Twitter account.

5. Airacuda's patented liquid muscles and hose-like body of synthetic aramid fiber—Kevlar-brand aramid is used to make bulletproof vests—enable streamlined movement through the water. Another true-to-nature feature is the swim bladder, an organ possessed by certain species of fish such as the Atlantic cod.

7. Aquajelly's movements are just as mesmerizing as the real deal. LED lights and eight tentacles make up the robot's exterior, while a lithium-ion battery, navigation system, two motors and a variety of sensors control movement and enable Aquajelly to respond to changes in power supply as well as the external environment.

8. Eelume was created in Norway as a cost-effective solution for conducting underwater repairs and maintenance. Eelume can perform simple subsea tasks including illuminating dark, hard-to-reach areas, cleaning and adjusting hardware.

9. Spot Mini has a 55-pound dog-like body with a long dinosaur-like neck and head. Mini's interesting design allows it to keep its head stationary while moving its body below. Its mouth is so sensitively calibrated that it can lift a glass from the sink and put it in the dishwasher without breaking it. Distance-calculating cameras and a gyroscope let Spot Mini run with the big dogs, including its predecessor Spot.

10. Bionicopter is more maneuverable than previous iterations of flying robots. With a wingspan of 27 inches and a body 19 inches long, this dragonfly robot is a great deal larger than the insects which inspired it. But in slow motion, its wings look just like the real thing. Bionicopter can fly forward, backward and stop abruptly in the air. A carbon fiber body covered in blue polyester performance material make Bionicopter a beautiful bug to behold.

11. Octobot, the first autonomous soft robot, has a silicone exterior that mimics the squishy skin of the sea-faring octopus. Inside Octobot, 3D-printed pneumatic chambers fill with gas resulting from a chemical reaction of hydrogen peroxide and platinum to power the bot's tentacles four at a time.