Rube Goldberg and his fantastic machines have inspired some real-life examples worthy of his memory.

Rube Goldberg, born Rube Garret Lucius, was a Pulitzer Prize-winning journalist, cartoonist, engineer and sculptor best known for his fantastical machines. His work and legacy speak for itself, and he also has the honor of being listed in the Merriam-Webster Dictionary as an adjective. 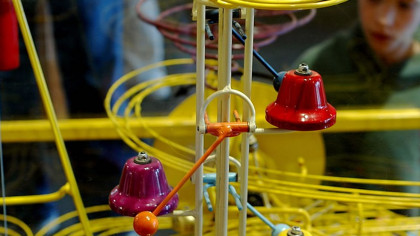 Rube conceived of, and drew, well over 50,000 cartoons throughout his life and he became an internationally renowned legend in his own lifetime.

He is best known for his overly-complex gadgets ostensibly created to solve rudimentary and simple problems. One of his most famous, the Self-Operating Napkin, being a prime example.

Combining his incredible sense of humor with his background in engineering, Rube devised some of the most unique, and best-loved, cartoons of all time.

Since then many have aspired to create machines in the spirit of Rube's work. Many of which exceeds all expectation.

Designed and built by Sprice Machines, this Rube Goldberg inspired machine is a must watch. Its overly-complex solution to a problem that doesn't exist would make ol' Rube beam with pride.

Steve Price, the chap behind the contraption, is an avid Rube Goldberg maniac and this one might just be his pièce de résistance. Excellent work sir, truly excellent.

2. This monstrosity took 297 attempts to get it right

This Rube Goldberg inspired useless 'machine' is a visual feast. Not only that but watching it might be one of the best 3 minutes you've ever 'invested' in your life.

It took well over 290 attempts to refine the monster, but the final product is something to behold. The machine was built by YouTuber Jackofallspades98 after losing a bet.

It took over 4 months to design and construct and combines a wonderful amount of falling and swinging elements. This one is a true masterpiece worthy of the memory of the great Rube Goldberg.

3. Marbles and Rube Goldberg machines is always a winner

Whenever you combine marbles and an overly-complex mechanism, you know you are on to a winner. This machine was built by YouTuber Kaplamino and it also features a satisfying amount of magnets and wood.

This combination leads the viewer on a wonderful and satisfying, though completely pointless, journey. Whilst there are probably more productive ways to spend your time, we can guarantee it won't be anywhere near as enjoyable.

An excellent effort we must say.

4. Spruce up, um, the spruce with a Rube Goldberg Christmas light machine

Yes we are more than aware Christmas is now long over but that's no reason for not getting prepared for the festive season. Instead of manually turning on your Christmas lights, why don't you consider a much less efficient method?

This particular example, built by a Latvian e-commerce company called Scandlweb, might just do the trick. Amazingly, the machine consists of no less than 412 individual steps.

The solution is so inefficient, takes a total of 10 minutes to complete (video has been sped-up) a relatively simple task. Fantastic, we could not approve more and Guinness World Records seem to agree.

5. Rube Goldberg machines even have a place for fidget spinners

Even fidget spinners become bearable when used as an integral part of a Rube Goldberg inspired machine. Such is the majesty of these devices.

YouTuber Kaplamino once again shows off his incredible useless-machine talent with this superb effort. It took more than 500 attempts to perfect but the final product is pure genius.

The creators also employed liberal use of magnets, falling weights and catapults to provide you with a feast of kinetic chaos.

Rube Goldberg machines are incredibly versatile. Some can even be used for educational purposes.

This example from Purdue University takes the viewer on a journey through natural history in the most over-engineered way possible. Although you roughly know the timeline, you can't help but stay gripped by the experience.

The machine was built in 2011 and actually broke a Guinness World Record at the time.

Famous Rube Goldberg influenced Brooklyn-based artist Joseph Herscher has made quite a few amazing examples in his time. One of his most watched is his page-turning machine.

You have probably seen this on your social media feeds at some point over the past few years. That being said, it is an absolutely brilliant example and more than worthy of inclusion here.

Rube would most certainly approve!

It was only inevitable that Rube Goldberg inspired machines would become the subject of a music video. OK Go made the very correct decision to make this happen.

Not that we are complaining, this effort is a fantastic effort. Any machine that includes domino runs, toy cars, and paint is never time wasted.

9. If Rube drove a car it must have been a Honda

Honda really did Rube Goldberg proud when they produced their, now famous, "The Cog" advert. Featuring a large number of car components, this Rube Goldberg machine is poetry in motion.

Not only is it a visual feast, but the sounds are also incredibly pleasurable. Their choice of components is, to put it mildly, perfect.

If Rube ever drove a car it would most certainly have been a Honda after watching this!

10. Even Mythbusters have had a crack

Yes, we know its another Christmas themed one, but when Mythbusters have a go you know you are on to a good thing. Combining a satisfactory amount of toy trains, old school robot toys, and a toy cannon, this Rube Goldberg inspired machine is fun to watch.

11. Forget OK Go, The Bravery did it years before

Do you remember the video to "Honest Mistake" by The Bravery released in 2005? Don't worry we've included it above to jog your memory.

Far from being an honest mistake, this choice of a music video was an absolutely inspired idea.

Whilst it is an impressive effort, we must say we would prefer to see more the machine's workings and less of the band members. No offense intended of course "The Bravery," don't look at me that way! (we couldn't resist).