11 Beautiful Mechanical Constructs in the Home: From Secret Doors to Backyard Railways

These inspired constructs can make any home special. Check out some of the most creative mechanical DIYs people have tried at home.

Most of us can only dream of incredible home features like secret doorways and home theaters. But there are homeowners out there that put their mechanical know-how to the test and make those dreams a reality.

Want to feel inspired? Here are some of the most amazing home constructs ever created.

1. The Moving Bookcase: A Secret Room for a Security System

Imgur user timekillerjay wired his entire house for Ethernet, and built in an impressive home security system. His real masterpiece, however, is a hidden room that acts as the system's control center. The security system includes 35 magnetic sensors and a total of 10 security cameras, which resulted in a lot of unsightly wires.

He constructed a moving bookcase that would operate as a door, hiding the control center from anyone who doesn't belong in there. It's an awesome and elegant way to keep the home safe and clutter-free.

2. The Backyard Rollercoaster: All the Fun of the Fair in Your Own Backyard

A retired aerospace engineer, Imgur user backyardcoasters decided to turn the skills he'd gleaned throughout his career towards building an outdoor rollercoaster for his grandkids. He designed the track and carts on CAD software.

The coaster can reach a maximum velocity of 15mph, and cost him only $480 to build. The enjoyment his grandkids got from it, however, was priceless.

3. A Starry Ceiling: Sleep Under the Stars Every Night

Redditor ratemyfuneral created this stunning fiberoptic ceiling light display for a nursery in their home. Using a wall-mounted Android tablet, the lights can be voice-activated.

The ceiling features 350 separate fiberoptic lights, all loomed above in the attic and poked through the plaster of the ceiling. Once all the fibers were set in the attic, they covered them with insulation. The result is a beautiful twinkling starry sky, right in the comfort of their own home.

4. The Secret Home Cinema: Hidden Behind a Magical, Lord of the Rings-Inspired Door

This build combines two of the coolest things in home construction projects - secret doors and home theater systems. Imgur user Neular created this touch-sensitive illuminating door for their home theater, inspired by the Mines of Moria door from The Lord of the Rings.

The door was built by creating a plywood shadowbox, and securing a bright LED strip within. To close the shadowbox they placed a sheet of plexiglass, which was then covered with a layer of vinyl. The door's details were handcut from the vinyl and then painted over to blend in with the surrounding walls. When touched, the door illuminates and opens.

5. The Expanding Table: Perfect For Any Number of Guests

This expanding wooden table is perfect for entertaining. Scott Rumschlag created this masterpiece starting with just some scrap plywood. He then designed a metal "star" which allows the outer parts of the table to rotate and expand outwards.

Once he had a working prototype, he built the entire table from scratch using lumber.

6. Beer and Soda Tap: Cold Beverages Whenever You Want Them

What could be better than having your own beer and sodas on tap? Redditor averagejones crafted this awesome beverage station from a commissioned barrel front and some technical know-how.

He started by drilling a hole in the floor to and running tubing down into his basement. The tubes were run into a kegerator in the basement, which housed the beer, soda, and glycol to keep both cold.

7. A Hidden Staircase: Sneak Down to a Dungeon Home Theater

Imgur user notadeckofcards had already transformed their basement into an awesome dungeon home theater, but the only access to the basement was from outside the house. To make entering and exiting the theater a bit easier, they decided to get creative.

They cut a hole in the floor of their living room, leading down to the basement. After making a set of stairs to fit the new cavity, the whole thing was neatly covered with a tasteful bench. So no one is any the wiser of the secret staircase leading to the cinema below. 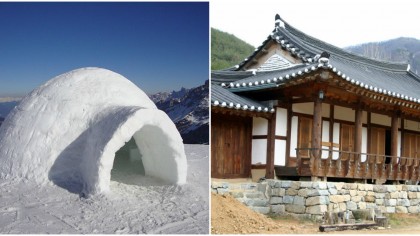 Why not add a futuristic touch to your home with some voice-activated blinds? Youtuber Yavin FourTwoSeven did just that, using an Arduino and servos. He started by removing the blinds' vertical rod and attaching new gear shafts that operated with the servos.

He then got to work on the Arduino, using a SmartThings Arduino shield to facilitate the use of smart devices with the blinds. Thanks to this, he's able to give Alexa voice commands to operate the blinds. A simple and effective upgrade that will make any home feel lightyears ahead of the rest.

9. The Backyard Railroad: All Aboard This DIY Model Railway

Imgur user rwreagan built this incredible backyard railway for his granddaughter, having been inspired by a 1965 issue of Popular Mechanics that outlined a similar project. The train runs on electric motors, and chugs along 275 feet (83.8 meters) of track.

The body of the train was made from plywood, and has an engine on either side. He used an Arduino as the base for the motor control unit, which was then installed into the train's chassis. He even built a sweet little engine house, for storing the train when not in use.

10. Iris Skylight: Control How Much Light Comes Through

Want to control how much light comes through your skylight? Build a mechanical iris! That's exactly what Imgur user calebkraft did, whose mechanical process was documented in a YouTube video by Make. He wanted to create a custom iris to fit upon the circular skylight over his spiral staircase.

He cut the main structure from baltic birch, with the leaves cut from aluminum. The iris runs along gears, which move the leaves to narrow or widen the scope of light.

11. A Closet Doorway: The Real-Life Gateway to Narnia

Secret doors and passageways aren't just fun for grown-ups, they can create magical play spaces for kids too. Like this genius door hidden in a closet that leads to a Narnia-themed secret room.

The pictures were posted by a friend of the family, Redditor kelseypolo. Upon moving into their new home, the parents discovered an unused room next to their daughter's bedroom and decided to cut a small entryway through the wall. The entrance was then hidden by a large wooden wardrobe, like the one from the famous C.S. Lewis tale. A simple and fun way to bring a little magic into the home.

7 Gadgets to Help You Build the Coziest Home Theater System