It does not matter if you are a kid or an adult, there is always a robot kit for that can help get you started with building your own plastic pal.

Have you always had a thing for robots and wanted to get your hands on to building robots? But after starting to think about “how to make a robot”, the first possible answer that comes to your mind is, "where to start?".

Even a micro robot can consist of a plethora of components from micro-controllers, sensors, and actuators to the communication module and lots of wires. So, if that’s all confusing, then you might want to start with a DIY kit.

DIY robot making kits come with a different level of sophistication to suit your knowledge and skills in robotics. With these DIY kits, making a robot can be a whole lot easier than you may think.

Once you manage to build the robot with these kits, you can always expand its possibilities by adding more sensors, motors and advanced codes.

From beginner to advanced level programmable robot kits, we have compiled a list of DIY robot making kits that will give a head start to build your own robot.

1. Crenova Robot Car Kit for Arduino: You love robots + You love cars + You are new to robotics = You love this product

Crenova, a company known for home products, has now started to make Arduino-based self-propelled robots. The Arduino-based board has an atmega328P microcontroller at its core, which has a diverse family of programmable functions and operations.

The Crenovo Robot Car has a variety of sensor modules available for the user to add and remove accordingly. The Crenova robot car has many different programming interfaces according to the user experience in programming, from a block-based drag-n-drop interface to Python scripting.

It has consistently scored well in the product review survey on various e-commerce sites. The USP of this kit is that it has many intricate details abstracted into a block which is divisible, so this is highly suitable for beginners to intermediate learners.

Be patient with this kit as this takes a little longer to be made, but the end result is worth all that time.

2. SainSmart 17-DOF Biped Humanoid Kit: An easy ride into the world of Humanoids

This ‘make a robot’ kit by SainSmart consists of hard aluminum chassis which can be assembled together with the help of the online manual available on the website. The 17-DOF Humanoid is well-equipped to participate in a Humanoid dancing competition.

It has an easy-to-use graphical interface programming and an advanced user can also write code for it.

With an average review of 4/5 stars in Amazon by verified buyers, it is a relatively cost-effective option to buy at $259.99.

3. UBTECH- Jimu: If there was something like LEGO builderbot, it would not have been different from Jimu

UBTECH, founded in 2008, is now a global leader in AI and humanoid robotics. UBTECH has been developing consumer humanoid robots, robots for business use and Jimu robot after its groundbreaking research made in digital servos, the core of humanoids.

In 2016, UBTECH Robotics became a unicorn with a $1 billion+ evaluation. The Jimu is a robot built with over 300+ parts assembled together. So, if you are interested in the mechanics of a robot, this is the one to buy.

UBTECH Jimu is a non-abstracted kit with a lot of small and intricate parts which you have to add. This gives you clear insight into its working. The UBTECH Jimu is a bang for the buck at $89.99.

However, Jimu is only visual-based block programmable which handicaps your customization plans.

Established in 2011, Elegoo Inc. is a technology company mainly focused on open-source hardware research & development, production and marketing. The Elegoo EL-KIT-012 is a smart robot car kit for absolute beginners.

All the module interface has been modified with Xh2.54 ports to make it much easier and convenient to assemble the car and reduce the chances of errors. The average user rating at its primary online retail outlet Amazon is around 4/5 stars and is priced around $69.99.

The pros are that at its price range it offers more than its competitors. The cons are that it is a bit easy to build for challenge-seeking learners.

5. Makeblock DIY Ultimate 2.0 Robot Kit: Line tracer, catapult arm, rolling tank, surveillance and every other thing you can think of, Makeblock can be made into it

Makeblock is a Shenzhen-based robotics startup conceived in 2011 and incorporated in 2013. Makeblock has an inspiring mission statement which reads: “To help people construct their ideas into reality, to enrich the soil of creativity and to take education to the next level”.

And they are constantly creating new products which are great starter kits suitable for every age group from elementary schooler to full-grown adults. This kit is also Arduino-based.

The Makeblock DIY Ultimate 2.0 robot kit has plenty of options for users as it provides various interfaces of cross-platform programming from PC to smartphone. It can be programmed by graphics-based drag-n-drop code editor to full-blown hardcore programming in an IDE or SHELL.

The Makeblock 2.0 is completely modular, so you can build and program the robot, and make it do anything from Camera Dolly to Bartender.

This amazing product is priced at over $350 which is a little bit steep.

If you have been waiting this long for a UAV to come up, we won’t disappoint you. LHI is a Shenzhen-based company which specializes in making quadcopters and parts for it.

The flight controller of the quadcopter is an all-in-one stabilization hardware, which runs on OpenPilot firmware. Powered by an STM32 32-bit microcontroller, it is one of the advanced hobbyist quadcopters.

It is a value for money package at $105.99. With this kit, you can understand the basics of building a drone or a UAV.

Most importantly, watching your robot fly high is enough incentive to give it a try.

7. Official Arduino Robot Kit: Made by the giant, for the newbies

Arduino is a world leader in open-source hardware and software platforms. Its DIY Robot Kit is beginner-friendly with a ton of potential uses. 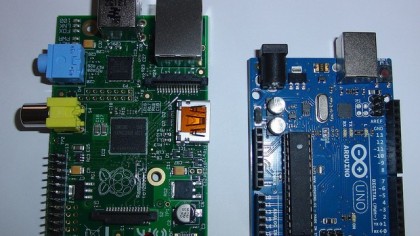 Raspberry Pi and Arduino: What's the Difference and Which Is Best for Your Project?

With exhaustive documentation available on arduino.cc, this is easily one of the best “How to make a Robot” kit. The package comes with a LED display, USB cable and a number of different integrated inputs with an extension for more sensors and SD card slot.

This robot is everything anybody would have wanted in an Arduino powered robot but were too scared of the build procedures with costly and sensitive electronics. The pros of this Arduino robot would be its ease of build.

You just have to pop in different parts together and voila your robot is ready. The cons of Arduino robot can be its pricing which sits at $260+.

The fact that you save a lot of effort and learn a lot at the same time, justifies its price.

8. Finch Robot: If you are a coding superhero, Finch is your sidekick

The Finch Robot is the brainchild of BirdBrain Technologies LLC Pittsburgh, PA. This is an integrated robot with all its components soldered in it.

The main goal of this robot is to gain more traction with programming the robot rather than worrying about everything from loose connections to frying the circuit. The robot has been designed to allow learners to program with a wide array of sensors including light, temperature, obstacle tracking, accelerometers etc.

The Finch bot doesn’t require any batteries as it is powered by the internal battery charged by USB. The robot has various different programming interfaces for different age ranging from their own easy to program graphics interface Snap! to C++ and C#.

The Finch bot has good pricing (only $99.99), compared to Arduino bot which also tackles the problem with beginners of soldering intricate circuit. However, you do not get to experiment with the electronics here.

Programming is your best buddy with a Finch Robot.

Zumo Robot Kit for Arduino, v1.2 (No Motors): A sophisticated kit for the challenge-seeker in you

Zumo is one of the many products which is sold by Pololu Corp, Las Vegas, NV. They have been producing robots and popular DIY kits since 2000.

Everything comes disassembled in a flat package. The product has exceptionally good ratings on online platforms as well. The cost of this contraction is $42.95 a piece.

One of the most interesting things about this kit is its ability to add any module compatible with the I/O of the microcontroller.

However, no motor is supplied with the kit, so don’t forget to buy them separately.

This is another DIY robot kit manufactured by Pololu Corp. The m3pi does not require soldering a lot as most of the components are popped-in or integrated with the circuit board.

This is also one of the most advanced robot kits in this list. The robot has a robust microcontroller, the AVR ATmega328P which is used in many lightweight industrial robots.

Withholding the company’s reputation high, the 3pi is the robot-of-choice in many college-level competitions.

11. OWI 3-in-1 All Terrain Robot (ATR): A special robot with a multi-functional mobile kit

The Californian firm OWI Corporations are the developer of this 3-in-one all-terrain robot. They have been developing robots since the early 80’s.

The OWI Corporation is committed to its vision of developing an enthusiasm for robotics on young minds. The 3-in-one ATR is a prime example.

It is an all-terrain, multi-function tracked mobile robotic kit, utilizing different track modules to transform the robot into 3 different variations: the forklift, rover, and gripper. Using a wired controller, commands are given to the robot to move forward, backward, turn, grip and lift.

ATR is a special robot present in this list because of the sheer number of different functions it can perform. Its design and use conditions help to expand your understanding of robot’s diverse applications.

It takes just 4 hours to get into shape. The cons of the ATR are its wired remote controller and limited programming capabilities.

The price tag of $60.95 for an all-terrain robot is a deal to hit right off the bat.

5 DIY Pergolas for the best party experience on 4th July