Many industries and disciplines of study have their own specific sets of terminology.

For those who don't work in the industry, many of these terms will go completely over their head, but many are actually very funny and/or interesting.

This list is far from exhaustive and is no particular order. Feel free to add your favorite lesser known interesting terms in the comments.

1. PICNIC or PIKNIK is hilarious

As they will attest, the vast majority of IT problems are usually an issue with the user rather than a genuine technical problem. You are only really likely to hear this term if you work in the industry as an engineer or as technical support helpdesk staff.

There is also a plethora of acronym terms for the same issue, if less catchy, like PEBCAK. This stands for "problem exists between chair and keyboard".

2. Cummingtonite sounds naughty but it's a real term

If you scour through a Geological dictionary you will come across some interesting and, at times, pseudo-risque terms. The mineral Cummingtonite is probably the most famous one, and it makes any geologist chuckle whenever they hear it.

But rather than being something "racy", this mineral is a lot less exciting in real life. Unless you have a passion for mineralogy and crystallography that is.

Cummingtonite is actually a magnesium-iron silicate hydroxide metamorphic amphibole that was first discovered in Cummington, Massachusetts in 1824. It is actually quite a beautiful mineral and worthy of inclusion in any self-respecting geological display.

3. Formication will make your skin crawl

Formication is another interesting, if, creepy, scientific term. This is not for its resemblance to another 'naughty' word, but rather what it actually describes.

In medicine, the term formication describes the sensation of small insects crawling on, or under, your skin. It is actually a specific form of another term, paresthesias, that includes other tingling skin sensations.

These can include prickling, tingling sensations and "pins and needles". It is a well-documented sensation that has many possible causes and is derived from the Latin word for ant, Formica.

4. Snap, Crackle, and Pop is a term in physics

Whoever coined these terms was clearly a fan of a certain cereal product that rhymes with "mice frisbees". They are used to describe some of the higher derivatives of position in mechanics.

If you are interested, the first derivative is velocity, the second acceleration and the third "jerk" or a rate of change of acceleration.

As for "Snap, Crackle, and Pop", they occupy the fourth, fifth and sixth derivatives of position. "Snap" is also sometimes termed "jounce".

5. Thunking is a genuine IT term

Thunking is another interesting technical term you might not be familiar with. It is used in computer science to describe when a program must call a subroutine to complete a task.

Thunks, or thunking, is mainly used to delay a calculation until its result is finally needed. It can also be used to insert operations at the beginning or end of another subroutine.

The term is also used when Windows, whilst operating in a 64-bit operating system is required to downshift to an older legacy code. Say, for example, a 32-bit mode for a particular task or 32-bit mode to a much older 8-bit code.

So know you know.

6. A Galactic Bulge is not what you think

You and your dirty mind, no this is something much less smutty. A Galactic Bulge is actually a tightly packed group of stars within a larger formation.

It's almost exclusively used to refer to the central group of stars that are found in the middle of most spiral galaxies. Originally these groups of stars were thought to be elliptical galaxies with a ring of stairs around them.

Thanks to the deployment of the Hubble Space Telescope we now know this isn't the case. Images from the telescope clearly show most bulges are just the centers of spiral galaxies.

The Milky Ways Bulge is somewhere in the order of 10,000 light-years across. It like others is mainly composed of older stars, gas, and dust.

7. Cleavage has several meanings in Geology

Here is another favored term for Geology undergraduates, and you can understand why. It actually has two meanings in Geology depending on the subject.

When discussing crystals, cleavage refers to the tendency of crystalline materials to split along distinct crystallographic structural planes. This is defined by the atomic structure of the mineral in question can lead to some very beautiful crystal morphologies.

In Petrology or structural geology, the term is used to define a type of planar rock feature that develops as a result of deformation and metamorphism.

Cleavage structure forms vary depending on the rock type, amount of deformation and degree of metamorphism that occurs.

Sorry, we couldn't resist including this one. Piloerection is the technical medical term for what most people refer to as goosebumps.

As you are likely more than aware, this is a natural involuntary bodily function that occurs when you're cold, excited (sexually or other) or scared. It can also occur when you and your body are under stress.

Stress or fear triggered goosebumps is considered by evolutionary biologists to be a vestigial reflex from our distant past. It is common amongst our higher ape cousins for example.

This reaction occurs in many other mammals besides humans and great apes and is most obvious in animals like cats and porcupines. Sea otters also use piloerection when they encounter sharks or other predators.

A nibble, far from meaning taking a little bite of something, is actually a technical computing term. It can also go by some slightly different spellings like nybble or nyble, but the meaning is the same.

It is used to refer to a four-bit aggregation or half an octet and is, therefore, half a byte. 4-bit aggregations are also known in networking or telecommunication contexts as a semi-octet, quadbit or quartet.

Nibble's formed the basic architecture of early microprocessors, pocket calculators and pocket computers. They are still commonly used in some modern microcontrollers.

Have you ever heard of or seen a Hinny? In case you weren't aware a Hinny is a domestic equine hybrid between a male horse (a stallion) and a female donkey (a jenny).

In this sense, it is the reciprocal cross to the more commonly known horse-donkey hybrid, the mule. Hinnies are distinguished from mules in their physiology and temperament.

Hinnies tend to be smaller in general stature to mules, have shorter ears, stronger legs, and thicker manes. Like mules, hinnies are usually sterile and cannot breed.

11. Is Sonic Hedgehog in your DNA?

Rather than being an iconic computer game character, Sonic Hedgehog (no the) is actually a human protein. 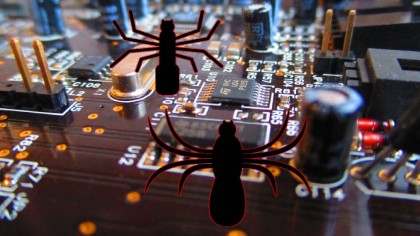 It is encoded by a gene of the same name, and both are usually abbreviated to SHH. This protein is one of three others within a mammalian signal pathway family called hedgehogs.

The other two members of the hedgehog family are the desert hedgehog (DHH) and Indian hedgehog (IHH). SHH is the most widely studied and best understood of the three.

SHH is vital to vertebrate organ growth in embryos and codes for the development of things like fingers, toes and some parts of the brain.

11 Science and Tech Museums You Can Tour Virtually

5 Things That Champagne Popping and Rocket Science Have in Common