Traffic lights have changed little over the last century or so, but these propose some significant changes to this ubiquitous technology.

Traffic lights are a ubiquitous part of any busy intersection. Their design has changed little over the years but these futuristic traffic lights hope to change all that.

One of the world's first ever traffic lights were introduced in London in December of 1868. But they wouldn't last long.

Not because of vandalism by disgruntled road users, the signal actually exploded less than a month into its operation.

This traffic light was gas-lit and its unfortunate self-immolation actually resulted in injuring its policeman-operator. After this brief experiment, semaphore-based designs began to spring up around the world in the first two decades of the 20th Century.

Electric-based light was introduced in 1912 in Utah, with automatic systems becoming common in the 1920s. Since then they have become an integral part of road-safety the world over.

Although their designs vary around the world, the basic concept remains the same, or similar. So much so, they are pretty much easily understood by all motorists wherever they drive abroad.

A Russian designer, Arinin Evgeny, unveiled their vision of the future of traffic lights in 2017. He proposes a series of differently shaped lights for every intersection.

Instead of the traditional colored blobs and arrows we are all familiar with, he proposes more intuitive shapes of color to avoid any doubt what the light is indicating.

These lights are not just road safety devices but actual works of art in their own way.

The Mobious Strip Lamp designed by Kisung Lee is very futuristic, indeed. Sleek and elegant it really does reinvent the concept of the traditional traffic light.

These are not just traffic lights, but also street lamps making each one a multi-functional piece of tech. Concept art of these traffic lights also indicates that the stop and go modes of each light also integrate a countdown timer, which is a nice touch.

The main idea is to reduce the visual mishmash of lights and get them composed into one neat strip. The design won the Red Dot Concept Design Award in 2010.

3. This Chilean design is interesting

Called Control, his design proposes a solar-powered system that not only acts like a normal traffic light but performs other functions, too. They perform normal traffic light functions using LED lighting, but also let drivers know their maximum speed limits, road conditions, and weather information etc.

They also streamline traffic flow using smart sensors that also prioritize emergency vehicles at any crossroads or junctions to pass. His smart traffic lights also integrate security camera's to check for road nuisance and other issues.

4. The UNISignal is designed to help the colorblind

These interesting futuristic traffic lights have been specifically designed for those who have trouble discerning the differences between red and green.

This is obviously a major issue for colorblind since these are the standardized colors to indicate stop and go signals on traditional traffic light systems.

Although, in most cases, the position of indicator lights are usually standardized. It could be potentially very confusing for stoplight systems that have a horizontal, rather than a vertical, design.

This great concept, called UNISignal, was created by four innovative designers and uses shapes along with colors to help alleviate any potential confusion. A simple yet great idea to help those who suffer from colorblindness to never be confused about when to stop or go ever again.

Designed by Damjan Stankovic, these futuristic traffic lights could help with air pollution in cities. Called EkoLight, the concept's mission is to help reduce cars' idling during long waits at stop lights.

This is achieved by enabling the driver to know how long they will need to be waiting at the lights so they can, in theory, turn off their engine. It does this using a countdown indicator around the red light.

Armed with this information, drivers can better prepare for the time when the lights will turn green again so they can drive off. Whilst similar lights do already exist, usually incorporating a numerical countdown, the design is very fresh and aesthetically pleasing indeed.

6. IBM wants to control your car's engine at traffic lights

Similar in concept to the Eko Stoplight above, IBM patented, in 2010, an idea that would force the issue. They foresee a system that could automatically override your control of the car's engine at stop signals.

This system would actually shut off your car's engine during long stops and then automatically start it again just before the lights turn green. The idea is that this would not only help you save on wasting fuel but also inhibit the possibility for drivers to run any red stop lights.

This, they believe, will reduce emissions in the affected areas and drastically help reduce road traffic accidents at intersections and crossroads.

Obviously, this design will not be very popular with everyone and the very idea of having control of your car overridden by a third party is a little worrying. But don't worry, this is just theoretical at present.

Designed by the Russian art studio, Art Lebedev, the Luxofor reinvigorates the design of traffic lights. The new design is actually pretty simple but very pleasing to the eye.

Called Luxofor, their design doesn't rely on gimmicks or other integrated technology, but rather makes them more visible. Instead of round lights (which were originally designed to accommodate light bulbs), this system uses square LED panels instead.

The shape of lights and use of LED technology makes them more visible and, therefore, a lot easier for motorists to read.

8. Check out this hourglass design traffic light system of the future

Whilst not the best design for colorblind motorists, this design is a very interesting concept indeed. The idea behind them is that it is only ever beneficial to provide motorists with as much information as possible to better make decisions when approaching, or waiting, at traffic lights.

Instead of simple light indicators, like most existing lights, it uses an hourglass as its main indicator. This hourglass changes color accordingly what empties accordingly to show how much time is left to either go or stop.

It also has a numerical countdown function during the amber phase to better inform drivers how long they still have to wait or get ready to stop. Pretty neat.

Designed by Hojoon Lim, these futuristic traffic lights actually use lasers to keep pedestrians safe at crossings. Pedestrians are obviously very vulnerable on the road and anything that can help prevent accidents is a bonus.

That's where this interesting design for futuristic traffic lights comes into its own. Lim's design envisages solar-powered traffic lights that would, in theory, greatly decrease the chances potential collisions at pedestrian crossings.

The system has a set of four signals at each intersection that consists of a sphere mounted on a pole with flat faces at each 90-degree face. Each face includes visual graphics indicating it's safe to cross or not.

But it goes further. The system utilizes thin laser beams that 'block' the way.

The designer hopes that this will add a useful and intuitive extra visual cue to make it harder to ignore red stop lights.

10. This traffic light was ahead of its time

Whilst not technically a traffic light of the future, in fact, it's the complete opposite, we had to include it for its brilliant design.

The Marshalite actually developed in 1936 by Charles Marshall, and is a brilliantly simple and intuitive concept and, dare we say, a very futuristic design for the time.

Unlike traditional traffic lights, the Marshalite was of a mechanical design. It employed a physical pointer that swept around a colored background, much like a mechanical clock.

The sweeping action was at a constant rate that moved through different sized colored sections at a predictable speed. Motorists knew intuitively how long they had until the signal would eventually change.

The Marshalite was used in Australia until the 1970s, but its design influence can still be felt today.

11. These traffic lights are pedestrian-powered

Back in 2011, a group of three students devised an interesting concept for futuristic traffic lights. Not only were the signals themselves intuitive to understand but the way are powered is very revolutionary indeed. 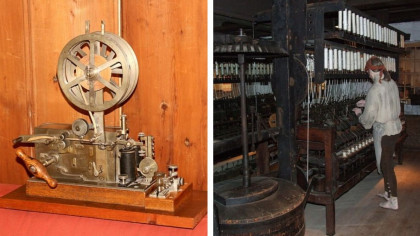 Rather than rely on grid-supplied electricity or traditional renewable alternatives like solar, they are actually powered by humans. The concept is to generate electricity using kinetic power as pedestrians cross a busy metropolitan intersection.

This self-sustaining traffic intersection would help save cities some money in energy costs for running the signals.

But it goes further than that, if pedestrian-power could be captured more widely it might also be able to power other things like LED street lamps, cameras, and other devices.

Although purely theoretical at present, this could be something to explore in the cities of the future.