11 Interesting Discoveries of the Brain Over the Past Ten Years

These 11 discoveries about the human brain range from new potential preventions for debilitating diseases to the very nature of how this highly complex organ works.

The human brain has long been called one of the most complicated things in science and the universe. Given its complexity, it has proven very difficult to unravel its inner workings in the past but current research is beginning to reveal its secrets.

Over the past decade, some interesting discoveries have been made about the wetware between your ears and some interesting advancements about treating some of its debilitating diseases when it goes wrong.

The following are in no particular order and is not exhaustive.

The potential impact of discovery: Researchers at Washington Universiy School of Medicine, St Louis has shown a connection between beta-amyloid build and the development of Alzheimer's. By monitoring the development of mouse brains they were able to note that the gradual build-up of beta-amyloid plaques in the subject's brains would lead to brain cells withering and dying en masse.

This research proposes making regular beta-amyloid tests, like blood cholesterol test, to check for early signs of the disease.

2. Autism Can Be Treated With Play - At Least For Young Children

The potential impact of discovery: Researchers at the University of California have discovered a novel way to treat Autism - play. The method, called Early Start Denver Model, puts 12 to 18-month-old autism sufferers through an intensive therapy (12 hours a week) of interactive play.

The huge emphasis on 'forcing' children to interact has had incredible results in improving their interpersonal skills but is not a cure.

The potential impact of discovery: In 2009 the FDA approved a new drug called Avastin to treat brain cancer., specifically Glioblastoma. This drug curbs the growth of tumors by cutting off their blood supply.

Researchers in the field have noted that normal treatments have an efficacy of less than 5%. Avastin has been producing results in excess of 70%.

4. Parkinson's Disease Can Be Treated With Tango and Music

The potential impact of discovery: Researchers at Washington University School of Medicine in St. Louis have found that tango lessons can be used to treat moderate symptoms of Parkinson's disease. Those sufferers who danced with partners showed an increased interest and motivation in continuing.

Other studies have shown sufferers recover some of their original faculties when exposed to familiar music.

5. Early Detection of Schizophrenia Could Be Close

The potential impact of discovery: Researchers believe we are on the verge of finding a method of diagnosing schizophrenia early. It relies on looking for biomarkers like blood proteins or genes.

6. Concussion Could Be More Serious Than First Thought

The potential impact of discovery: Researchers have found that damage caused by concussions might be more series than first thought - especially if a second impact occurs before damage is healed from the first. Ann McKee from Boston University found that several types of microscopic damage occur during multiple head blow events like chronic traumatic encephalopathy (CTE).

She also found a significant indicator for CTE was the buildup of a cell-killing protein called Tau. They hope to find similar indicators in living patients.

7. Magnesium Sulfate Could Save Thousands of Stroke Victims

Type of discovery: Neuroscience/Medicine/A and E

The potential impact of discovery: A new emergency treatment technique for strokes in currently under development in California. The plan is to administer magnesium sulfate to the stroke patient en route to the hospital.

Magnesium sulfate is known to dilate blood vessels and block calcium buildup that can lead to cell death.

8. An Atlas of the Brain Was Created

The potential impact of discovery: In 2017 the Allen Institute for Brain Science released a free to use 'Brain Atlas' database to enable other researchers to explore the building blocks of the human brain. his open-access service will massively help neuroscientists worldwide to interpret human nerve cell data.

9. The Internet Is Making Us Dumber

The potential impact of discovery: Researchers might have confirmed what most of us have begun to suspect - the internet is making us more forgetful. 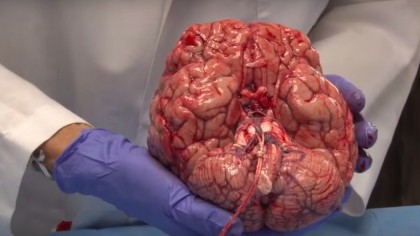 The team found that our ever-increasing reliance on the internet does appear to be affecting people's thought processes - especially for problem-solving and memory recall.

Dubbed 'cognitive offloading' they found that people's growing 'outsourcing' of thinking to the internet is a cumulative process that gets worse over time. With our ever-increasing use of smart and other internet-connected devices, this could show a worrying trend for the species in the in the future.

With our ever-increasing connection to the internet could the logical next step be to directly plug into it?

10. Stroke Victims Could Have Some Mobility Returned With Treatment

The potential impact of discovery: There is some evidence that high-intensity repetitive exercise (using robots or people) can improve stroke victims' arm functionality. Others show that transcranial magnetic stimulation can also help partially paralyzed patients for up to three years.

Future plans hope to use stem cells to repair stroke-injured parts of the brain.

11. Your Thoughts Are Not Your Own - They Are Your Hippocampus'

The potential impact of discovery: Researchers at the University of Hong Kong found that the Hippocampus helps synchronize the brain using low-frequency oscillations. They used optogenetics and resting-state fMRI to reveal the activity of the hippocampus and how it controls activity in other parts of the human brain.

This research is a big step forward in the grand hope to understand the functionality of brain connectivity and the human connectome. Other researchers have also shown how this part of the brain actually influences the way you think.