We all remember asking ourselves, "Am I really going to use this in real life?" at some point or other during school. Needless to say, there are plenty of things we learned at school that we don't necessarily use in our day-to-day lives, that doesn't stop us from remembering them. 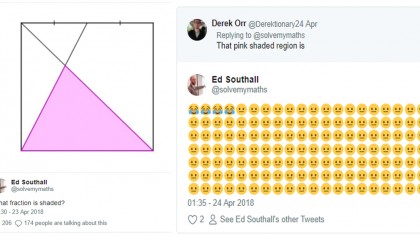 Just recently on Twitter, Wikipedia asked users to reply with the most advanced math facts they could remember from their school years. What follows are their answers, which range from basic theorums to trickier formulas. What's the most advanced thing from math that you remember?

Mnemonic devices are a great way to remember complex ideas and information. They're so effective that you'll probably remember them long after you've finished school. Like this Twitter user, who still remembers SOH CAH TOA.

SOH CAH TOA is a simple way to remember how to measure the Sine, Cosine, and Tangent. Who said Trigonometry had to be difficult?

We've got a running list of mnemonics students use to help remember trigonometric functions. https://t.co/qZ3iRPW7CA

2. Triangles Inside Semi-Circles: An Unchanging Rule

There's a lot to remember when it comes to math. Luckily, a lot of the rules and facts are solid and unchanging. Like the fact that any triangle inscribed in a semi-circle is a right-angled triangle, every time.

This particular math fact has its roots all the way back in ancient India. You're far from the first generation who's puzzled over Trigonometry, but at least you have easier ways of remembering the rules.

The fact that any triangle circumscribed inside a semi-circle is always a right-angled triangle!!

3. A piece of Pizza: Tasty Way to Remember Formulas

Sometimes it is hard to make sense of math in the abstract. A good way to make the subject easier is to relate it to something tangible in your real life. Like pizza!

That's what this Twitter user did to help remember how to measure the volume of a circle. Instead of imagining just a regular circle, imagine it's a pizza. To find out how much delicious pizza you have, all you have to do is multiply Pi by the radius squared (z z) and the height (a). If you couldn't remember how to get the volume of a circle before, you'll probably never forget now.

That the volume of a circular dough based, cheese and tomato topped meal with radius z and height a is Pi z z a

You probably remember the Quadratic Formula from your school days, but do you remember what you used it for? The Quadratic Formula is necessary to solve equations that look like this: ax2 + bx + c = 0. Basically, it allows you to find the roots and determine intercepts on a graph.

If you ever had any experience with Algebra, it's highly likely you came across this formula. It always finds a solution and is fundamental learning when it comes to high school math. Have you used it much lately?

(-b+-√b^2-4ac)/2a that's the formula for finding roots.
And pretty much all the higher secondary math.

5. The Limit Does Exist: Integrating and Differentiating Fraction Limits

Things tend to get a little bit complicated when you're working on limits, integrations, and differentiation. If you didn't get the hang of things back in your school days, don't worry. It's never too late to learn something new, as this Twitter user shows.

They just recently learned that the limit of a fraction stays the same, provided both parts are integrated or differentiated. So whether you're still in school or are brushing up on some old skills, that's a math fact you can commit to memory.

Mine (although this was only about 6 months ago) would be that the limit of a fraction stays the same if you integrate or differentiate both parts, if the original fraction was 0/0 or infty/infty. Thanks, l'Hôpital!

6. Trigonometry Basics: The Hypotenuse and the Pythagorean Theorem

A lot gets lost in the fray when you're at school, so you probably remember terms like "hypotenuse" without actually remembering what it refers to. Worry not, Wikipedia is here to jog all of our memories.

As they state in their tweet, the hypotenuse is a right-angled triangle's longest side. You might recall using the Pythagorean theorem to measure the length of the hypotenuse. If not, there will be more on that later. And don't worry, there won't be a pop quiz.

The hypotenuse is the longest side of a right-angled triangle, like so. A generalized form of the Pythagorean theorem teaches you how to calculate it! https://t.co/Cmh4VYKtb4 pic.twitter.com/bFKZZ7EsWx

See if you can remember this handy formula from school. HCF means the Highest Common Factor, whereas LCM means the Lowest Common Multiple. This Twitter user remembers an easy way to figure out the relationship between the two.

8. Euler's Formula: Determining the Faces, Vertices, and Edges of a Solid

Did you have a favorite formula or equation in school? Something that you were taught and just clicked? This Twitter user fondly remembers the straight-forwardness of Euler's formula for determining the faces, vertices, and edges of a solid object.

The formula is written thus: F+V-E=2. F stands for "Faces", V stands for "Vertices", and E stands for "Edges". It remains true for any shape that has no curves or holes. Give it a try, and count the faces, vertices, and edges of any geometric shape.

I like Euler's equation on the number of faces, vertices and edges of a solid.

Beauty can be found in everything, even mathematics. Though Euler's formula for Faces, Vertices, and Edges may be popular, Euler's Identity is often referred to as the most beautiful equation in all of mathematics.

It allows you to work on the relationship between complex numbers. While it looks simple written down, it's usually reserved for some pretty complicated work. Are there any equations that you consider beautiful?

10. Fermat's Last Theorem: One of the Most Difficult Mathematical Problems

One of the most exciting things about mathematics is that there are so many difficult problems to solve, with so many answers to unearth. A good example of this, as pointed out by this Twitter user, is Fermat's Last Theorem.

Fermat's Last Theorem is typically written thus: an + bn = cn . The first successful proof of the theorem was only achieved in 1994 after mathematicians had worked for 358 years to find a solution. For that reason, it's widely considered to be one of the most difficult mathematical problems ever proposed.

If you had any interest in art or math during school, you probably heard about the Golden Ratio and Fibonacci Numbers. Both facts have their roots in Classical times and refer to the mathematics of aesthetics.

The Golden Ratio is often written thus in algebra:

As for Fibonacci numbers, they occur in a sequence that can be graphed in a spiral.

Make Your Own Humane Mouse Trap from Simple Materials