Welcome to the strange world of molecular gastronomy - where science and food collide.

By  Saoirse Kerrigan
May 26, 2018
Varaine/Wikimedia Commons 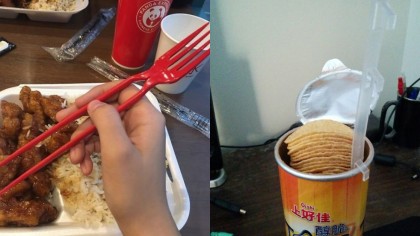 Naturally, it is not a type of cuisine that appeals to all appetites. For those who prefer their food and drink to look, taste, and feel a certain way, molecular gastronomy can be pretty mind-boggling. Here are just some examples of dishes that push expectations to the absolute limit.

Nothing is more refreshing on a hot, Summer day than an ice cold mojito. That is, a mojito served in a glass. This might be a little bit tricker to drink. Chef Devaux created a cocktail that looks like a water droplet, by using a technique called spherification.

Using traditional mojito ingredients like sugar, rum, lime juice, and mint, he puts a scientific twist on the classic drink by adding calcium lactate. Once strained, the liquid is poured into silicon molds and then placed in a freezer to set. As he waits for his mojitos to set, he adds sodium alginate to water and blends. He drops the frozen mojito spheres into the sodium alginate water for 3 minutes, creating a gelatinous membrane outside the sphere.

After all that work, you'd definitely need a stiff drink. Would you try this at home?

2. Strawberries and Ice Cream: Not All That It Seems

Strawberries and ice cream is a simple dessert classic, but don't be fooled by the dish in this video. The strawberries are actually candies and are filled with powdered ice cream. The powder isn't a texture you'd usually associate with something as smooth and creamy as ice cream, but that's part of the crazy creativity of molecular gastronomy.

The recipe is based on one by chef Seiji Yamamoto, and combines chopped strawberries and sugar, to begin with. After allowing the moisture to seep out of the strawberries for two hours, they are then boiled in a pot until they reach a soft, jam-like consistency. More sliced strawberries are mixed with sugar and placed in a plastic bag and cooked sous vide. They're then mixed with cream and gelatin, then blasted with liquid nitrogen to create the ice cream.

It is certainly an incredible process. It is up to you whether you would prefer to follow the recipe, or just serve a few scoops of ice cream with chopped strawberries.

Pasta is a great, filling comfort food. For this dish, chef Ferran Adria put his scientific skills to the test to create a transparent pasta for his diners. It's surprisingly simple to make, though maybe not quite as simple as just boiling some pasta in the first place.

First, a consummé is created by mixing chicken broth and gelatin. Next, the consommé is boiled in a pot along with saffron and gellan. Once boiled, pour the mixture into a pan, allowing it to spread evenly across. Allow to set, and then cut into thin strips to make tagliatelle. It might be unconventional, but it's an interesting way to make pasta without any dough.

If you ever visit a modernist restaurant, don't be too surprised if you see "air" listed on the menu. It is a common feature of molecular cooking to create light foams, referred to as "air", using soy lecithin powder. While many of us might prefer to dine on something a bit more substantial than air, the process is pretty fascinating.

This dish was inspired by Chef Ferran Adria's carrot cloud or carrot air. To create the air, just combine carrot juice and soy lecithin and blend. It's really that easy. Then you can scoop up some spoonfuls of your orange foam and use it as a garnish, or as a light appetizer. Hopefully, you have something more filling lined up for the next course though.

Chef Chris Anderson is a true innovator when it comes to gastronomic creations. Here he details how he creates potato spheres that he describes as being similar to "potato custard". While that might not excite every palette, he goes on to create some truly incredible-looking transparent potato chips.

The chips are made by salting and boiling potato starch, before dehydrating it. The dehydrated starch is then deep-fried, and according to Anderson tastes exactly like a potato chip while looking just like a piece of glass. Would you try your hand at making glass chips, or are you happier just eating regular chips by the bagful?

Back to the foamy side of molecular gastronomy, say hello to this fluffy cloud of frozen cheese. If you want to get scientific in the kitchen, you can whip up some frozen parmesan foam yourself based on a recipe by chef Ferran Adria.

All you will need is grated parmesan cheese, water, and that ever-important special ingredient - soy lecithin powder. Mix the cheese and water and cook, but don't boil. Allow to sit for 30 minutes before straining, and then mix in the lecithin. Blend with an immersion blender to allow plenty of air to get into the mixture and voila! Light, cheesy foam. Maybe you can use it to top your transparent pasta.

Because of the scientific nature of molecular gastronomy, many aspects of the cuisine involve changing the states of certain foods. Or, at the very least, creating the illusion that a food has changed states. In this instance, Chef Adria shows how to create a crunchy edible film that tastes just like soy sauce, giving the impression that the liquid sauce has been converted into a solid.

You can actually buy thin, edible films online. The next step is to flavor them. On the mat of a dehydrator, spray a layer of soy sauce. Top with the edible film, and spray again. To create a thicker, crunchier film you can add more layers of film, just make sure you spray with soy sauce each time. Dehydrate for 12 hours until the film is super crispy and delicate. Why not try breaking up some of the film and sprinkling it on your sushi next time?

Sometimes at a restaurant, your plate might be drizzled with oil for flavor. Or maybe, if you're in a molecular dining establishment, your plate will feature burstable oil bonbons like these. If for whatever reason, you want to try your hand at making oil bonbons at home, Chef Rogers has you covered.

Melt some isomalt in a pan until it is transparent. Set some ring molds on a silicone mat, then pour a small amount of the melted isomalt into each mold. Allow to set until it becomes tacky, then delicately spoon your oil onto the isomalt while gently lifting the mold. As you lift the mold, it should allow the isomalt to pull away and elongate, creating the thin outer layer of the bonbon. Pinch to close, and simply break off any excess once it's completely hardened. You could even try filling the bonbons with other liquids. Molecular gastronomy is all about getting experimental.

If you are looking for exciting new ways to use the edible film you bought off the internet, then look no further than this recipe inspired by the work of chef Dani García. Next time if you are hosting taco Tuesday, impress (or infuriate) your guests by whipping up some of these ultra-tiny shrimp tortillas.

Just cut your edible film into small rounds and lightly coat with egg. Repeat this step with a few more layers of film, to build up a strong base. Sprinkle with nori powder for flavor, and fry gently for a few seconds until it gets crispy. Next, add your fillings. A key tip is to use methylcellulose as an edible glue to keep your tiny shrimps in place. Serve to your loved ones, and hope that they don't ban you from cooking for them forever.

A huge trend within the molecular gastronomy world is creating ravioli - pocket foods similar to classic Italian ravioli, but with an inevitable surprising twist. With that in mind, say hello to custard ravioli. If you're not immediately put off by the idea of bursting pockets of custard, then maybe you'll want to try whipping up a few at home.

Baker, Ann Reardon, suggests making an alginate bath similar to the one used in the mojito recipe in this list. Make custard using eggs, sugar, cream, vanilla essence, and the secret ingredient - calcium lactate. Once your custard is prepared, spoon the mixture into the alginate bath to create the thin membrane around the custard. Rinse with water, and then enjoy your bursting bubble of custard with strawberries or other accompaniments.

11. Reconstructed Tomato Soup: The Most Unusual Soup You Will Ever See

Dishes don't get more wholesome and comforting than a big bowl of tomato soup. Why mess with a classic? Well, because messing with classics is what molecular gastronomy does best, as evidenced by this truly unusual take on tomato soup.

If you want to create something similar, just to really test your abilities in the kitchen, you can take a leaf out of chef Ferran Adria. Once you've covered all the conventional steps of making tomato soup, strain the liquid to remove any thick pieces of vegetables.

In a pot, add agar-agar to the soup. Stir until boiling, and then transfer into a bowl. Once in the bowl, fill up a syringe with the soup (you know your food is getting serious when there's a syringe involved). Attach the syringe to a silicon tube, and press the soup through it, making sure it doesn't spill out the other end of the tube. Place in an ice bath to set. Using an empty syringe, push the soup out of the tube. There you have it. Tomato soup in spaghetti form.