The ISS is a major feat for humanity. While in orbit, the space station has managed to capture photos that offer a unique perspective on the earth and space. Here are some of our favorites.

The International Space Station or ISS, has captured the hearts and imaginations of nations around the world, a symbol for where mankind is in space and where it eventually plans to go.

Completed as a multinational project between 1998 and 2011, the ISS is the largest human-created structure that humanity has ever launched into space.

As of the beginning of 2018, 230 individuals from 18 countries have set foot on the station (or floated through).

Currently, the ISS flies at an average altitude of 248 miles above the Earth, circling the globe at a whopping 28,000 km/h.

Even more interesting is the fact that the station can be seen with the human eye at night, moving across the night sky.

Technology to make routine refueling of vehicles and satellites in space a reality will be tested on the @Space_Station when the Robotic Refueling Mission 3 experiment arrives on the next @SpaceX #Dragon, scheduled to launch on Dec. 4th! https://t.co/GeViUR4qDI pic.twitter.com/dijo7ypfdD

So why exactly is the ISS floating around in Earth’s Orbit? The main purpose of the International Space Station is to provide an international laboratory with a space environment.

However, while up there in space the station has captured awe-inspiring photos of the tiny blue marble you call home and the terrifying beauty of space.

Here are some of the most beautiful photos captured by the International Space Station.

Pictures of Earth make sense, however, taking a star-filled shot of your place in the galaxy puts things into perspective.

Taken by ISS astronaut Terry Virts, the shot captures the subtle curvature of the earth as it is touched by the sunlight in the distance.

Above the horizon, you see a sight that would make any magazine cover. With the Sun in the distance, you can see the vastness of space and billions of stars that make up just a tiny fraction of the universe.

The Aurora Borealis has always fascinated people on the earth and is deemed an amazing experience by those who have had the fortunate experience of seeing them in the Northern night sky.

However, there is probably no better seat for the light show than on the International Space Station.

Like ribbons performing above the Earth, they look both beautiful and slightly terrifying. For the uninitiated, the lights are caused by solar winds, cosmic rays, and plasma hitting and interacting with Earth’s atmosphere.

Taken by an ISS scientist the photo captures a beautiful phenomenon that occurs in the Alaskan region.

The photo highlights how the Earth’s atmosphere can alter your perspective and change the way you see things in the sky. Taken in August when Alaska receives 24 hours of sunlight, the sunlight in the picture is being reflected off of the highest clouds in the Earth’s atmosphere, or “noctilucent” clouds.

With the Aurora Borealis in the background, the shot highlights both the beauty of Earth and the humans that dwell on the planet.

The shot encompasses the northern city lights and sunlight just kissing the horizon. A shot that was sure to humble a lot of those who were on the ISS.

Scientists on the International Space Station have not only seen impressive things in space but a lot of natural, geographic, man-made, and even biological events from the stations. Mauritania Richat Structure is on that list.

Known as the Eye of the Sahara, the structure resembles that of a colorful swirling hurricane with its multi-colored rings and concentric circles.

The formation appeared due to countless years of erosion of a sedimentary dome, that later eventually exposed the layers to the surrounding air and environment.

Taken from the ISS over Mexico, the shot gives you a different perspective on such a common natural occurrence.

You cannot forget about the Moon. Soaring high above the planet the moon is a staple and strong representation of mankind’s current relationship with space.

Taken by an  Expedition 29 crew-member on the International Space Station is another example of how the Earth’s atmosphere affects your perspective on the planet.

It is good to mention, that at its current speed, the ISS could easily travel to the moon in under a day if capable.

What happens in Vegas may not stay in Vegas. This city filled with lights and anything else you can imagine looks like a shining beacon in space, surrounded by the emptiness of the desert.

Taken by Chris Hadfield on the ISS, the photo showcases what the city looks like at peak brightness. On any given summer day the city may generate 8000 megawatts of energy.

From Earth, the Himalayas are already an amazing natural feat inspiring the brave to venture off into the region.

This shot from the ISS highlights the Chinese and Indian border and the snow that populates its areas. With its 500 meters, deep canyon the rivers have painted streaking patterns all across the region.

Caused by microscopic plants that float in the upper, sunlit layers of the ocean, plankton blooms are cool phenomena that occur in the animal kingdom and happens on a massive scale.

Bright blue in color, the phytoplankton multiply quickly creating huge colonies that can be viewed from kilometers away.

Taken by Chris Hadfield, the shot showcases, that even some of the earth’s smallest creatures can be captured on film by ISS.

Part of the Bolivian Andes Mountains, this shows one of Bolivia’s most enchanting lakes. Placed 4300m above sea level, the rustic looking lake gets is a brown color from the algae that thrive in its salty water. 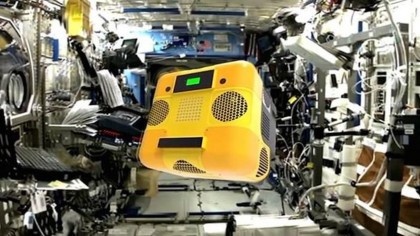 Even more, interestingly, the 10km shallow lake can even change colors throughout the year, moving from orange to yellow, to even green. Another fantastic shot from the International Space Station.

What is your favorite shot from the International Space Station? Leave your comments below.