Space enthusiasts around the world shared their personal shots of this year's 'best' meteor shower show. Here are our eleven favorites!

The Perseid meteor shower of 2018, caused by remnants of the Swift-Tuttle comet, ran from July 17 to August 24 and made headlines everywhere as the best meteor show of the year. 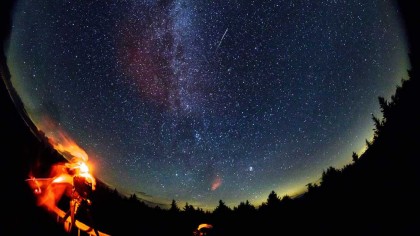 This is because the event, also called the Perseids, is one of only three yearly meteor showers where up to 100 meteors per hour can be seen.

This year's edition definitely did not disappoint and, lucky for us, space enthusiasts around the world were there to capture the shower's greatest moments.

We picked our favorite fan pictures to share with you and hope you will love them just as much as we did.

1. Perseids in the land of Gaels

Self-proclaimed "angloirishman" Nick Edgington took to Twitter to share pictures of the showers from what he calls the "land of the Gaels." The image is an exquisite view of Scotland's clear skies illuminated by Swift-Tuttle comet's almost divine celestial dust.

Engineer, Aurora guide, and astrophotographer Adrien Mauduit gave us this unique view of the Perseids' heavenly showers through Switzerland's famed Mont Blanc mists. The artist is known for his work on Auroras but he may want to add meteor showers to his list!

Pictures of lighthouses are glorious just on their own but James Rowley-Hill combined UK's oldest working beacon of hope, the Happisburgh, with this year's Perseids for a truly unforgettable effect. The showers illuminate East Anglia's skies while Happisburgh stands guard.

Canadian author and photographer Alan Dyer gave us a glimpse of the showers from the Great White North. The spectacular image is a composite of nine pictures and was appropriately named by the artist the "Saskatchewan Summer Star Party."

The Perseid meteor shower over the Saskatchewan Summer Star Party last night, Aug 10, in the Cypress Hills. This is a composite of 9 images with meteors layered onto a base image of the sky with the aurora which appeared briefly. @Saskatchewan @CHdestinationA pic.twitter.com/zKq6kbayXF

5. The lonely meteor in a crowded sky

Sam King refers to himself as just an enthusiast photographer but we beg to disagree! This breathtaking image not only proves King was successful in balancing "both the lights and the stars" like a true professional, it also features a clear shot of a brave lonely meteor making its way through the crowded sky.

Portland Bill and the Perseid - One of the most challenging astro shots I have tried, trying to balance both the lights and the stars. Was lucky enough to capture a #Perseid meteor in the mix too.#WexMondays #fsprintmonday #sharemondays2018 @B_Ubiquitous @VirtualAstro pic.twitter.com/OXqqiI30on

6. A view from the caves

This stunning view from inside a cave is courtesy of UK-based photographer Kevin Ferrioli. He captioned the pic "Early Earth Early Man" likely in tribute to humanity's early cave dwellers.

We could not help but feature Ferrioli twice. His glimpse of the Perseids from the very edge of Dorset's sea-side cliffs offers a scenery few have had the privilege to witness.

8. A time-lapse over the North York Moores

UK graphic designer Stephen Dinsdale asked for a retweet of his North York Moores Perseids time-lapse and we had to oblige. The setting is ideal for this low frame rate photography technique and the end result is mesmerizing to watch.

9. The Bavarian skies in motion

The second time-lapse of our list is courtesy of graphic artist, scientists, and musician Luis Calçada‏. Shot in the southwest of Munich, Germany, this elegant display of meteors striking through the sky took two hours of filming to produce.

Roughly 2h timelapse of the #PerseidMeteorShower Over the Bavarian sky, in the Ammersee, southwest of Munich. #Perseids2018 pic.twitter.com/vsmlgaIFJK

10. Seen from a giant's columns

According to legend, UK's Giant's Causeway columns were built by a Gaelic giant. Irish landscape photographer Alistair Hamill brought us this mystical shot taken on top of the mythical world heritage site.

Chasing after #Perseids2018 meteors last night. I didn't capture many on camera - perhaps because we were very taken by the beauty of the Milky Way over the #giantscauseway! pic.twitter.com/5h68yj6Qq6

This streak from the Perseids was so powerful it lit up Las Vegas' Mojave Desert for a few seconds. Lucky for us, this intrepid photographer managed to capture the scene just in time!

This streak from the #PerseidMeteorShower was so bright that it actually illuminated the #MojaveDesert for a couple seconds. #Monday #August13 #Perseids2018 #nightphotography @vegasphotograph pic.twitter.com/9zq6rVWeBN

Although these photography pros made it look easy, capturing these celestial events is no small feat. Meteors strike swiftly through the starry skies. Getting a shot of them in motion requires both patience and luck. For those who are not deterred by the challenge, NASA offers some key tips to help you on your photo journey. Good luck and may the stars be ever in your favor!