These YouTube Science channels are a welcome change to cute kitten videos.

If you're bored of watching videos about cute kittens on YouTube you might want to consider switching gears. 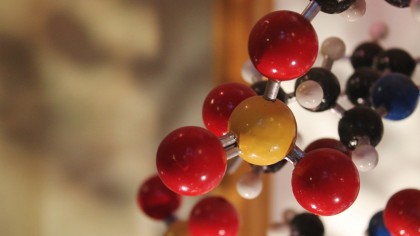 These 11 YouTube Science Channels are dedicated to exploring the physical and theoretical limits of human understanding.

Whilst some cover many aspects of Science, others are more 'pure' space and Astronomy centered.

These are just some of our favorites on YouTube and as such this list is far from exhaustive.

It is also not intended to be a 'Top 11' and is in no particular order.

1. SmarterEveryDay is great for bringing science to life

SmarterEveryDay, run by Engineer Destin Sandlin, is packed with interesting videos on a wide range of subjects from space to archery. It is his mission to take viewers beyond the theoretical about science in fun and entertaining ways.

"I explore the world using science. That's pretty much all there is to it. Watch 2 videos. If you learn something AWESOME, please subscribe if you feel like I earned it" - SmarterEveryDay.

The channel started in 2006 and has since grown inexorably to a whopping 6.2 million subscribers.

2. Kurzgesagt - In A Nutshell - Using birds to explain science!

Kurzgesagt - In A Nutshell is one of the most popular science-related YouTube channels out there. Since its inception in 2013, the channel has grown to an amazing 7.8 million subscribers.

With incredibly well-produced videos, this channel explores many aspects of science and technology. Including a liberal use of animated birds, you will quickly understand complex principles in minutes.

Subjects are varied, but their videos on space are particularly entertaining and educational. Be warned, you will likely end up 'losing' hours of your day watching their entire catalog.

You have been warned!

3. Vsauce is one of the biggest YouTube channels on science out there

Vsauce, with a whopping 14 million subscribers, might just be the go-to science channel on YouTube. Covering primarily theoretical aspects of science, Vsauce's Michael Stevens dulcet tones will soon smooth-talk you into understanding in no time.

The channel covers many aspects of science explained in very simple terms. Most episodes start with posing a question about science and then answering it in short order.

Subjects cover things like the Earth, space, the human brain, human existence and many more. Vsauce also often collaborates with other Science-related YouTube channels so keep an eye out for your other favorites!

4. Veritasium: The Element of Truth

Much like Vsauce, Veritasium is another of the most popular science-related YouTube channels around. The channel started in 2010 and now has a respectable 5 million subscribers.

Hosted by Derek Muller, Veritasium's name is derived from the Latin for truth "Veritas" to provide a name for a fictional element. The channel is packed with high information density videos on primarily Physics-related topics from hydrodynamic levitation to quantum entanglement.

If you want to refresh your understanding of a particular subject or learn about something completely new, this is the channel for you. Check it out!

NOVA has been bringing the wonders of science to viewers since 1974. It is the most-watched primetime science series on TV and reaches an average of 5 million viewers every week.

In 2006 they started their own YouTube channel and it has now accumulated a respectable 152 thousand subscribers. Their channel has a nice range of NOVA produced clips and standalone videos on various subjects.

Their space and astronomy range are well polished and often feature prominent scientists like Neil deGrasse Tyson and the late, great Carl Sagan. If you get bored of space-related topics 'heaven forefend', you can always explore their other topics at your leisure.

6. Deep Astronomy is all about space

Deep Astronomy is one of the smaller channels on this list but don't let that fool you. With a modest 212 thousand subscribers, the channel is "dedicated to Space Fans who love astronomy and want to learn concepts and hear about new discoveries in astronomy."

The channel features various videos on various aspects of Astronomy in an attempt to show viewers the importance of this scientific discipline in our everyday lives. It also includes Vlog content and updates on the latest news from space.

If you are after a purely space-themed channel to watch, this might be the right fit for you!

7. Minutephysics is fun and entertaining

Minutephysics, created by Henry Reich in 2011, this channel's tagline is "Simply put cool physics and other sweet science". It covers various aspects of science from entropy, astronomy, quantum teleportation to many other subjects.

Each 5-minute video breaks down a topic into an easy-to-understand explanation with great cartoon-ish graphics.

Some of his most popular videos are animations explaining parallel universes and string theory, along with Schrödinger’s Cat and the Grandfather Paradox.

If you ever wanted to know about the latest goings on in space, NASA is probably a good place to start. They first joined YouTube in 2008 and have since gathered a respectable 3.2 million subscribers.

Being the official channel of NASA, viewers are provided with videos on official NASA footage and updates from the Space Agency. It also features the latest news about NASA's activities as well as interviews and other updates from astronauts and researchers.

If you need a good source for space-related topics, you can't really go wrong with the NASA channel. Various departments of NASA also have their dedicated channels if you want o dig deeper into certain aspects of their activities.

9. SpaceRip believe they offer the best space videos on the web

SpaceRip makes the bold claim that they offer "the best space and astronomy videos on the web". Whether that is true or not we'll let you be the judge.

That being said, with over 660 thousand subscribers they must be doing something right. Videos range from historical reflections on Apollo to the reviews of the latest news in Astronomy.

Whilst this is a smaller channel on our list it is definitely worth checking out.

10. Fraser Cain covers a wide range of topics about space

Fraser Cain is the publisher of Universe Today and co-host of Astronomy Cast. In 2007 he launched his own dedicated YouTube channel that has since grown to collect 221 thousand subscribers.

This channel is perfect for any fan of space, sci-fi and pop culture and it offers a "Guide to Space". The channel is packed with content on space that is published every Monday and Thursday. Each episode addresses a particular topic from black holes to galaxies to the search for aliens, and much more.

There is also a weekly "Space Hangout" that is aired lived every Friday about the latest news in space and astronomy. These live hangouts often feature astronauts, sci-fi authors, and other space scientists.

11. Peer into the past with the official Hubble Space Telescope channel

Videos range in length from over an hour to less than 3 minutes and cover various topics relating directly to Hubble and space telescopes in general. As you'd expect, each video contains some stunning and awe-inspiring footage and images from deep space that will leave you begging to know more.

If you want to be inspired by the cosmos around us, you can't go wrong with this channel's content.