From the Jetsons' to Blade Runner, flying cars have existed in nearly every sci-fi world. And we could have them far sooner than imagined.

Flying cars have long been the staple of sci-fi films and books for decades and our youthful dreams of flying cars in our lifetime, perhaps sooner than we ever thought possible.

Some companies are making literal leaps and bounds in this virgin territory and we could see the first of them released within just a few years.

These 11 are some of the closest and most interesting flying car projects that could be taxiing you around your local city very soon indeed. It seems the future, at least part of it, is tantalizingly close.

Founded in 2006 by a team of MIT graduates, Terrafugia is currently developing two interesting flying car projects. The first is called the Transition which, they believe, will be the world's first practical flying car.

The other, sexier, project is the TF-X. It is this model that they intend to scale to mass production to revolutionize personal transportation forever.

The TF-X is being built from the ground up, if you'll excuse the pun, as an all-electric, vertical takeoff and landing, a computer-controlled flying car.

Not only that but its sleek lines will make it a rival for a high-end sports car of today. This is one to really keep an eye out for over the next few years.

Joby Aviation had been working on a personal aerial craft for several years before receiving an enormous cash injection from Toyota and Intel. The conditions of the investment were to provide a practical all-electric air taxi of the future.

This air taxi is interesting, compared to others on the list, as it is being designed with a seating capacity of up to 5. It will be, by virtue, a lot bigger and heavier than its rivals.

Prototype plans reveal that it will be a VTOL but more resembles a traditional airplane but with multiple propellers. This is another interesting one to keep an eye on.

The company behind one of the most famous cars in the cinema is currently developing a flying car. This company is DeLorean and this could possibly be the only project that is stepping back in time with its flying car project.

DeLorean Aerospace currently has Paul DeLorean at the helm who is the nephew of John DeLorean. John was the man principally responsible for the iconic DeLorean gull-wing car that became so famous in the Back to the Future films as Dr. Brown's time travel device.

PAL-V, a Dutch Aerospace company, is nearing completion of their flying car project - the Liberty. They are so close, in fact, that they intend to take pre-orders for its as early as 2019.

If true, this will make it one of, if not the, first commercially available flying car. According to their CEO, Robert Dingemanse, all they need now as the final necessary certifications to make their Liberty market-ready.

The Liberty runs on two engines each specially designed for use on the road or in the air. It has been clocked at a top land speed of 160 km per hour and can reach 180 km per hour in the air.

Uber are currently developing their own ambitious flying car project or VTOL taxis. The program is called "UBERAIR" and is planned to be introduced in Dallas and Los Angeles first.

The project has been in development since 2016 and Uber hopes to get it off the ground very soon. Little is really known about the project beyond that but they have teamed up with five different partners, including Boeing, to make it a reality.

Their choice of initial cities does highlight some inherent issues with VTOL craft. Namely, VTOL's don't function very well in harsh environments and are best suited to areas with generally mild weather and low rain for safety reasons.

Despite this, they plan to begin rolling out the service as early as 2020 in LA.

Airbus, not to the outdone by the apparent 'gold rush' to bring flying cars to the market, have been developing one of their own. It's called the Vahana and it is planned to be another all-electric VTOL that will be self-piloted.

The idea is to save money on hiring trained and experienced pilots to actually fly the thing once released. Since autopilot software is pretty mature at this point, it shouldn't be out of the scope of possibility to do this, especially for an accomplished organization with the size of Airbus.

This will also have other benefits for things like maintenance whereby the craft can automatically fly themselves to for maintenance and upgrades when required.

Progress appears to be going smoothly with it completing its first successful test-fight earlier this year. This was accomplished completely autonomously and Airbus is planning many further tests for things like basic maneuvering in the future.

A German startup called Lilium Aviation is also getting in on the flying car project game. Their proposal is, like others, quite ambitious and is planned to be able to carry up to 5 passengers.

They also plan to make it possible for their flying car to be summoned using an app on a smartphone. Like all other companies on the list, Lilium hopes that theirs will change public transportation forever.

Lilium's solution will, like others, be an all-electric VTOL flying car but with a twist - it will be jet-powered. There jet-powered flying car should have a top range of around 300 km and promises to make a trip between London and Paris in around an hour.

British company VRCO are currently developing their own flying car project. They have designed their NeoXCraft to be able to traverse on land, in the air, and on the water as well.

According to the company's CEO, Daniel Hayes, the NeoXCraft should be ready, at least for road-testing only, by 2020. Its design is particularly innovative.

Its ducted fans can be used in flight or rotated to become wheels for driving. The flying car's VTOL mode will enable it to carry around 180 kgs in payload equivalent to about 2 passengers as well.

It's already available for pre-order and will cost you just over $2 million.

It is pretty advanced in its development and has already begun several rounds of test flights in New Zealand earlier in 2018.

Its aim is to break into the flying car project scene and directly provide competition for its potential rivals in development by Airbus and Uber.

The craft features no less than 12 lift fans to provide the flying car with vertical take-off and landing capabilities. These are all-electric and are able to be moved independently of one another.

The Cora is capable of reaching heights of between 150 and 900 meters and has been clocked at a top speed of 180 km per hour.

Not to be outdone by the competition, Toyota is also developing its own flying car project. Their solution is very different from others on the list and is hoped to be showcased by opening the 2020 Olympic Games in Tokyo.

The Toyota SkyDive is currently the smallest electric vehicle in the world and measures a modest 2.9 meters long, 1.1 meters tall, and 1.9 meters wide.

It is being developed by a group of specialists Toyota engineers led by Tsubasa Nakamura who actually designed the vehicle in his own spare time.

It is hoped by the development team to have the SkyDive max out its land speeds at 150 km per hour with cruising speeds exceeding 100 km per hour.

They also hope to begin making test runs of the craft very soon and have it ready for mass production by 2030.

The Aeromobil, the name says it all really, is a Slovakian gamble at the flying car market of the future. It is being built by a company of the same name and really does look the part. 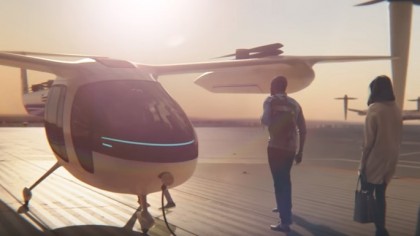 "AeroMobil is an exceptional vehicle. It‘s a real flying car, with all that a car and an airplane have to offer. Because of its true flexibility, you have a choice: road or air. The choice is ultimately up to you, but, whether you choose to be aerial or earthbound, AeroMobil will always turn heads."

This flying car project is nearing completion and will be powered by a specially designed hybrid-electric system. It also comes in two variants, the 4.0 VTOL and 5.0 VTOL.

The Zee.Aero is another great example of a real-world flying car project. Developed by a company also backed by the co-founder of Google, Larry Page, this flying car's progress is something of an enigma.

To date beyond its official U.S. Patent, very little other information has been released about it.

The EHang is a specially designed aerial drone taxi. This flying car made the news a few years back after successfully carrying Dutch Prince Pieter Christiaan to Amsterdam just months after the creator's CEO Huazhi Hu took a ride in it himself.

It is 100% powered by "green" electricity and has various fail-safe systems that enable it to land itself safely should any malfunctions occur. Once in operation, the taxi's take-off and landing locations will all be digitally preset so passengers can simply be picked up and arrive at their desired destinations without the need for a pilot.

Astro Aerospace's Passenger Drone is yet another flying car currently in development. Its working prototype features a carbon fiber shell, 16 independent rotor blades, and a touch control system in the cockpit.

There is, as yet, no official release date for the craft but Astro Aerospace plan for the flying car to find a home in various industries from agriculture to the military.