11 Reasons Why You Shouldn't Turn Down That Data Entry Job: Career Advice From Tech Experts

These titans of tech all started at the bottom and worked their way up. Here's the advice they want to pass down to the next generation.

Starting your career in tech can be exciting and daunting in equal measure. You might find yourself full of exhilarating new ideas, and no idea how to make your voice heard in the industry.

Though your ideas might be big, it's important to remember that some of the most successful leaders in tech today started small. So many industry giants started in entry level positions, and swear by the experience they gleaned from rising through the ranks.

Here are just a few words of wisdom from titans of technology who started at the bottom, proving that you can start at data entry and work your way up.

Being impatient is OK, it shows you have the drive and desire to grow. Nobody knows this better than Xerox CEO Ursula Burns, who started at the company as an intern while completing her Master's in mechanical engineering at Columbia University.

After finishing her degree, Xerox hired her as a full-time employee, where she then went on to climb the career ladder to become CEO in 2009. Her story teaches us that it's never too early to start getting your foot in the door. If you can get an internship while still studying, there's no telling what that position could lead to.

2. "A goal without a timeline is simply a dream." - Robert Herjavec

Robert Herjavec is best known today as being an investor on TV's Shark Tank, but this successful businessman had humble beginnings. After a brief stint of working in TV and film, Herjavec decided to make a career move into the technology industry. Despite his lack of experience in the field, he secured a job at a company that made IBM mainframe emulation boards by offering to work for free.

Obviously, you should value your work and seek payment where it's due, but Herjavec was a man with a plan. He knew he could support himself through other means while gaining the experience that shaped him into the success he is today. From working for free, he rose to the position of general manager. After that, he went on to found his own internet security software business using the experience he gained from his first unpaid job in tech.

Always have a plan, and figure out how the work you do today - paid or unpaid - can help you achieve your goals.

Before going on to create world-famous websites like Twitter, Blogger, and Medium, Evan Williams worked a variety of entry-level positions in various tech companies. In fact, his early roles weren't even always strictly IT-related. When working for O'Reilly Media, Williams was hired into their marketing department. Only later did he start writing code independently, which opened up freelance work opportunities for him.

Don't be afraid to broaden your horizons when getting your start in the industry. As Williams' case shows, working in a different department doesn't mean you're disqualified from your desired role. Seize the opportunities you're given, and see what you can make of them.

4. "The truth is that you can't tell how anybody's doing in the tech industry for at least five or ten years." - Steve Ballmer

Though today he is known as the CEO of Microsoft, Steve Ballmer started his career as an assistant product manager while still studying in the Stanford Graduate School of Business. Though it was a huge risk, he dropped out of his graduate school in 1980 to become Microsoft's 30th employee.

Ballmer had no way of knowing that Microsoft would become the international powerhouse that it is today. At the time, he was joining a small company which offered a lot of opportunity for growth, but also a lot of risk. As he himself points out - the future of tech is always uncertain. Often in your early career, you have to make the choice between stability and opportunity. In Ballmer's case, the gamble more than paid off.

5. "No better space to be than in tech right now." - Mike Gregoire

Mike Gregoire has been working in the tech industry for a remarkable 25 years, and his position as CEO of CA Technologies is the culmination of his hard graft over that time. Surprisingly, his first jobs were not in tech at all.

Gregoire got his start in life delivering furniture, and then working at a pollution control facility. But as he found out for himself - tech is the place to be. It goes to show that no matter what your employment background has consisted of so far, you can always make a start for yourself in the tech industry.

6. "When we go into an industry, we go all the way." - Charles Phillips

Though he is now the CEO of Infor, Charles Phillips' journey through the corporate ladder of the tech industry wasn't the most straight-forward on this list. A computer hobbyist early in life, he joined the Air Force after school and later earned a BS in computer science. 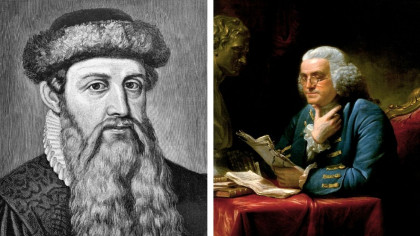 21 Great Inventors Who Had Surprising Jobs

Due to his eyesight, he wasn't able to become a pilot, and instead took a post with the Marines. It was during his time in the Marines that he worked on computer systems - experience which allowed him to apply for the job of Vice President of Software in BNY Mellon once his tour had ended. Remember, there's no one right way to get the necessary experience needed to work in the technology industry. Whether you get your start in an internship or in the military, all experience is valid.

7. "I have had all of the disadvantages required for success." - Larry Ellison

Larry Ellison's start in the industry was a rocky one. He dropped out of both the University of Illinois at Urbana-Champaign and the University of Chicago, yet still managed to be hired as a database engineer. Thanks to his work ethic and tenacious attitude, he even ended up being hired by the CIA.

In 1977 he founded Oracle, a relational database system, which he presided over as CEO until 2014. He still serves as Oracle's CTO. Despite his rocky start, Ellison was able to take the opportunities that came his way at entry level and work his way up to become one of the most formidable forces in tech throughout the 1980s.

Jan Koum's story is one of the best rags to riches tales in recent years. The WhatsApp co-founder emigrated to the United States from Ukraine when he was just 16-years-old. He taught himself coding by buying computer science books and returning them when he was finished.

He got his first break after university working as a security tester for Ernst and Young. This led to a chance encounter with Yahoo! employee Brain Acton, who helped Koum secure a job at Yahoo!

It goes to show that any first job can lead to important networking opportunities that can lead to bigger things.

9. "Good students are good at all things." - Marissa Mayer

Former Yahoo! CEO Marissa Mayer knows the importance of being an all-rounder. When she graduated from Stanford University in 1999, she turned down 14 different job offers ranging from teacher to consultant. Instead, she chose to become Google's 20th employee and their first software engineer.

Though it was a risky option, and a lower pay grade than the other offers she'd received, Mayer knew that this was the industry she wanted to commit to. Her detailed approach and broad knowledge in a number of fields were invaluable to the growth of Google.

So if you find yourself weighing up your options, go with your gut. The tech industry can always use more all-rounders.

In 1973 Samuel Palmisano was offered a sales job in IBM. By 2003 he was CEO. He started as a salesman, but made sure to meet for lunch with former chairman Thomas Watson Jr. once a month for two years, showcasing his dedication and desire to learn more.

It doesn't matter which position or which department you start in. If you show that you care about the work, and demonstrate a hunger to progress in your field, people will take notice.

11. "The best way to make change is to know how something works." - Brian M. Krzanich

Brian M. Krzanich is known as the CEO of Intel, but in his early days at the company, he almost got himself fired. Krzanich was hired as a process engineer in 1982, and once wiped out the output of an entire factory. Somehow, he managed to stay in the company's good graces and still rise to the top.

Don't sweat it if you make mistakes. Even the greatest of the greats do. By almost destroying his chances at Intel, Krzanich saw the opportunity to improve how the company worked. Even someone at the bottom can make a big difference along the way.

15 Engineering Salaries in 2020: Which Field is on the Rise this Year

The Reason Why Good Engineers Quit Their Jobs

Truth or Hoax: CDC Recommends Shaving Your Beard To Protect Against the Coronavirus