Optical illusion tricks just go to show how amazingly complex and sophisticated our brains really are.

Optical illusions come in many shapes and sizes, colors and patterns but are all united by one common dominator - they all fool your brain. Your brain has evolved over millions of years and is perfectly adapted to create a perception of the world around it.

Given the unimaginable amount of information available, your brain needs to make sense of it and has developed some strategies to filter out anything it doesn't really need. This process can lead to mistakes and hence optical illusions are a thing.

But you should think of this as a boon rather than a deficiency as it means you are not completely overwhelmed by the world around you. Afterall it's better to think you just saw a tiger in that long grass and be wrong, than miss it and have your day ruined.

The following 11 are some of the most interesting and spooky examples of optical illusions that our minds create. This list is far from exhaustive and is no particular order.

1. The Poggendorff Illusion will confound you

The Poggendorff Illusion is one of those optical illusion tricks that will make you look twice. If you look at the image on the left you'd swear that the black line appears to be a continuation of the lower blue line.

In fact, the black line is perfectly lined up with the lower red one, as you can see on the right-hand image. You can check this by using a straight-edged object like a ruler if you think we are trying to trick you as well.

The illusion is named after the German physicist Johann Poggendorff. He first described the illusion in 1860 and it shows us how our brains perceive depths and shapes.

To date, there is no widely accepted explanation for this optical illusion. It is most likely an error caused by our brains attempting to convert or visualize, 2D images as 3D objects.

This process distorts the depths of between the lines. But no one really knows for sure.

2. The Impossible Trident is one of the most famous

The Impossible Trident, impossible fork, blivet, poiuyt or devil's tuning fork, is another famous optical illusion. You've likely seen in it some form or other many times in your lifetime.

As you can see the image appears to form a basic trident shape. But your eyes do indeed deceive you the closer you examine the object.

There appear to be only two prongs at the base, yet there also appears to be three prong endings. But wait, there is more, the prongs themselves start out as cuboidal but morph into cylinders at their ends - what the?

If ever you needed to be shown some proof that your mind does not always perceive reality, this is it.

They do? Don't worry you are not alone - in fact, this is quite wrong.

They are, in actuality, the same shade of gray. Although it's difficult for us to prove that fact to you here, you can follow this link for the proof.

Your brain makes sense of the image as a 3D cylinder on a checkboard with a clearly defined light source. The illusion is thought to be created by your brain using its experience of shadows and contrast in the real world - but reaching the wrong conclusion.

Don't feel too bad, this actually shows how effective your brain is at making short-cut's to understand the world it sees. Although it was fooled this time it shows your brain is superb at constructing meaning from otherwise random patterns.

4. Shepard's Tables will make you scratch your head

One thin and long to the left and one short and fat to the right? Wrong - they are actually exactly the same size but in different orientations.

If you don't believe us check for yourself or watch this animated illustration.

The optical illusion was first presented by American psychologist Roger Shepard (hence the name) in his book Mind Sights in 1990. This is a very simple yet incredibly effective trick of the mind that just goes to show how your brain distorts what you see.

It works or it is believed to, by the fact that your brain can't help but make 2D geometric drawings appear 3D. Perspective foreshortening, therefore, distorts the two identical tables depending on their orientation and suggested distance from us.

The Pinna Rotating Rings is another interesting, yet disturbing optical illusion.

For this optical illusion to show itself you need to focus on the dot at the center of the image. Now keep your eyes fixed on that dot and move your head towards and away from the image.

Did you see it? Yes, that's right the rings appear to move before your very eyes.

Not only that but depending on which way you moved your head first they spin in the opposite direction as you reverse your head movement. Spooky!

6. The Monster Illusion will confuse you

The Monster Illusion is an optical illusion that often appears in psychology textbooks. And for good reason - it really is an impressive illusion.

As you look at the image above the lower monster will appear to be significantly smaller than the top one. You've probably guessed that this is, in fact, an illusion.

The monsters are actually the exact same size and proportion. Your brain automatically adjusts the two images to make them 'fit' the clearly defined perspective of the background image.

In this sense, the brain has corrected the information it 'sees', so that it fits its inbuilt model of a 3D world.

7. The Jastrow Illusion is annoying

The Jastrow Illusion is one of those optical illusions you can't believe you fell for. It is often attributed to the Polish-American psychologist Robert Jastrow.

If you look at the image, the bottom of the two shapes appears to be distinctly larger than the top one. Believe us when we say they are actually the exact same size.

Such despicable trickery! And one that you can make with any similar objects in the real world.

The illusion occurs because your mind is confused by their relative proportions as the shorter edge of the top figure is placed directly adjacent the larger edge of the lower figure.

8. Kanizsa’s Triangle is completely in your mind

Kanizsa's Triangle is another annoying optical illusion. It is named after the psychologist Gaetano Kanizsa who first described the effect.

As you scan the image with your brain, for some reason, it decides to create an outline of a point down triangle. This happens despite the fact that there is not one there.

You can logically work out why your brain would assume the presence of a triangle given the inferred breaks created by the wedges and other white angles.

This is an example of something called illusory contours or subjective contours which evoke the perception of an edge when no actually exists. Although attributed to Kanizsa similar illusions can be found in art from the middle ages.

9. The Scintillating Grid is pretty spooky

The Scintillating Grid is a variation of the Hermann Grid and it is as baffling as its predecessor. As you move your eyes around the grid you'll notice black dots appear and disappear before your very eyes.

In the age of .gif files we can assure you this is a simple .jpg and the illusion is completely created by your mind. Interestingly, if you want to try on your own, if you tilt your head 45 degrees, the effect is reduced but not eliminated.

Herman's original was published in 1870 but this variation on it was produced by E. Lingelbach in 1994. The effect is caused, so it is thought, by a neural process called lateral inhibition.

This, in short, describes how any 'pixel' in your field of view is controlled by a group of light receptors rather than an individual one. Thus each retinal ganglion cell pols information from multiple photoreceptors.

The Endless Staircase or Penrose Stairs is a mystifying optical illusion and one of the most widely cited. It was devised by Lionel and Roger Penrose and is a variation on another famous optical illusion, the Penrose Triangle (not included here).

It, as you can see, is a 2-D depiction of a staircase in which the stairs make four 90-degree turns as they ascend. Yet, despite this, they appear to make a continuous loop of stairs - which is obviously not physically possible.

This illusion was first published in 1958 within the British Journal of Psychology. It was later made famous by M.C. Escher in his Klimmen en Dalen lithograph in 1960.

11. The Hering Illusion will blow your mind

The Hering Illusion is another interesting optical illusion trick that will completely blow your mind. If you look at the image carefully you can't help, but notice that the red lines seem to bow outwards. 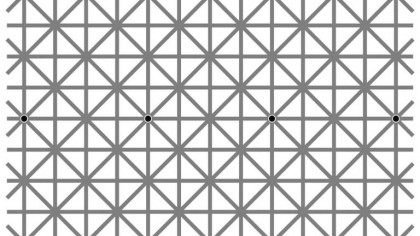 In fact, although you might not believe us, they are actually perfectly straight. Honestly - check with a ruler or other straight-edged object if you don't believe us.

This optical illusion was devised by Ewald Hering, a German physiologist, in 1861 and is one of the most famous. He believed that the distortion occurred from the fact that your mind overestimates the angles at the point of intersection and 'corrects' the red lines accordingly to fit.

This just goes to show you can't always trust what you see before your very eyes.