AI is simply better than humans at lots of tasks, from the obvious of data analysis to the unexpected of music making.

Artificial Intelligence technology is improving rapidly. But are we on the verge of singularity? Unlikely according to experts, but we have to admit that AI is definitely better than us at a whole raft of things from games to problem-solving.

Here are the 11 times that AI beat us at our own inventions.

1. The Deep Blue computer is a better chess-player since 1997

Chess masters versus computers is the age-old battle. From the 1980’s, computers were able to start to beat good chess players.

The most famous battle was between Deep Blue and world Chess champion Garry Kasparov in 1997, though some experts believe that the computer had an unfair advantage.

While some may argue the computer system used to beat Kasparov isn’t technically ‘intelligent’, there is no denying it beat the human's ability to analyze chess moves and pick the right one.

2. The data science machine analyses data better than you

Data drives so much of what we do, from analyzing elections to developing healthcare solutions. Reportedly, people that build models that explain and predict patterns in the ocean of “Big Data” are at a shortage.

But that might not matter thanks to the development of computer software that is proving itself to be better than humans. MIT have built software that is beating the majority of human researchers it battles against in a series of recent competitions.

The Data Science Machine can automatically create predictive data models based on raw datasets in just two to 12 hours. A team of human data scientists may require several months to complete the same task.

3. AI is faster and smarter at visual recognition

"Any repetitive task that creates a lot of data will eventually be learned by computers.”

Any task that involves visual recognition is likely to be done faster and more efficiently by a robot than by a human.

“From an A.I. perspective, we can now train computers to perform better than humans in many tasks, for instance, some visual recognition tasks,” says Satya Mallick from LearnOpenCV.com and the founder of Big Vision LLC. “These tasks have one thing in common: there is a vast amount of data we can gather to solve these tasks and/or they are repetitive tasks. Any repetitive task that creates a lot of data will eventually be learned by computers.”

4. Alibaba built AI that can read better than the average human

The computer's results were compared to average human responses and in surprising results, the computer came out on top by a few points.

Alibaba called the results ‘a milestone’ and explained that the AI can apply its reading skills to everything from customer service to medical emergency inquiries.

Carré who has worked with some of France's biggest names such as Johnny Halliday and Françoise Hardy says although the system has the capability to write original melodies and even suggest the chords and sounds to play them with, it still needs a human touch to bring it all together. So while it is still a very ‘human album’ there is no denying the future of music may well include a lot of Ai in the future.

6. This AI system is more performant at strategy games too

A self-taught computer has beat the world’s best human players at the strategy game Go. The DeepMind system, developed by Google beat The Go world champion Ke Jie in May last year to claim the title of the world's best player.

DeepMind beat Jie at the notoriously difficult game without any input from humans. The journey of Google’s DeepMind development from ambitious idea to world champion is outlined in an article in the scientific journal Nature.

A collaborative team of scientists have developed an AI system capable of creating original pieces of art. The idea is to make art that is “novel, but not too novel”, says Marian Mazzone, an art historian at the College of Charleston in South Carolina who worked on the system.

The researchers came together form Rutgers University in New Jersey and Facebook’s AI lab in California built the system that sees two neural nets interact with each other to continuously improve their results. One creates a solution or image and the other judges sit in a continuous loop until the desired outcome is achieved.

The discriminator network was trained on 81,500 paintings to build a knowledge bank about what is and isn't’ classed as works of art.

8. The most challenging AI application yet: Law

The role of lawyers isn’t going to be easily replaced by robots, but AI is seriously proving itself very handy in the legal world.

LawGeex put a three-year-old algorithm trained to evaluate contract up against twenty experienced attorneys with the robot being the clear winner. 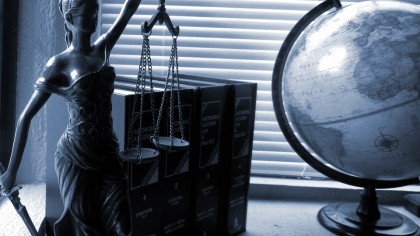 The bots and humans were tasked with identifying and highlighting 30 proposed legal issues in five standard non-disclosure agreements (NDAs) in just four hours.

Not only was the AI more accurate it managed the task in just 26 seconds compared to the human time of anywhere between 51 minutes to more than 2.5 hours.

According to the report released about the experiments, robots are simply better at being able to read an analyze this kind of data.

“It is not enough to merely skim the agreements,” LawGeex Head of Data Gil Rosenblum said in a statement. “A deeper analysis is required. Lawyers and the AI, for instance, were penalized for missing an exemption relevant to the contract, or mistakenly identifying an exemption where it was irrelevant.”

9. This AI just smashed the record for solving the Rubik's Cube

The tiny bot managed to solve the colorful puzzle in just 0.38 seconds. The previously held record by a robot was a time of 0.637 seconds set in 2016 by German semiconductor manufacturer Infineon and the Sub1 Reloaded bot.

The fastest time set by a human is 4.69 seconds set by Patrick Ponce of the United States.

10. Self-Driving Cars will reduce deaths and save money

The self-driving revolution is still some time away but AI is already proving itself to be safer and better than most humans. Self-driving cars will be safer than humans and won’t ever break the law.

A report by the Eno Centre for Transportation has suggested that if just 10 percent of cars were self-driving, traffic deaths could be cut by as much as 1000 per year. If that number was increased to 90 percent of vehicles more than 21,700 lives a year could be saved as well as $447 billion USD.

Despite the statistics in favor of self-driving cars, there are still huge hurdles to overcome including city street design and high costs.

11. AI in warehouses never need a day off

Robots are undoubtedly better at completing repetitive tasks than humans. They never need to go on toilet or lunch breaks and they won’t complain about overtime.

Although we haven't quite worked out the best way for robots to grasp objects, robots in a warehouse can already move pallets and make decisions based on the popularity of certain items.

Amazon was the first big logistics retailer to embrace robotics and now owns 30,000 so-called Amazon Robots it uses across its U.S based warehouses.