The 12 Biggest Nuclear Tests in History

If you're anything like me, you'll spend an unhealthy amount of time asking yourself (and then the internet) silly questions. Today's happened to be "I wonder what the 12 biggest nuclear tests in history were?" Well, you'll be happy to hear the "interweb" has delivered. Strap in, this will "blow" your mind - sorry couldn't resist.

The very first nuclear test in history was on July 16, 1945. This groundbreaking event sent tremors, figuratively and literally throughout history. Since then there have been 2,055 nuclear tests around the world by various nations. There can be little doubt that this technology, like no other, crystalises humanity's ingenuity and destructive potential. This may be the only time in history that a species has the potential to completely destroy itself, what a nice thought.

The first device had a 20 kiloton yield, or 20,000 tonnes of TNT - crikey. The US and USSR managed to expand this technology's destructive potential over the subsequent 2 decades. Weapons with yields of 10 megatons (10 million tonnes of TNT) were soon achieved. That's 500 times more potent than the first test in 1945!

Nukes fall into two categories. The first are pure fission or atomic, for example, the first tested bombs and those deployed in Japan during WW2. The second type uses a fission core "bullet" to trigger a fusion reaction of hydrogen in so-called hydrogen, or H, bombs. The second one has a significantly larger devastation potential, as you'll see.

"Now I have become death, the destroyer of worlds"

Taking inspiration from Alex Wellerstein's Nukemap, we have compiled the following list with graphical representations of nuclear tests and the potential devastation they would create. We'll use Paris to compare the blasts.

For reference, we provide you with the screenshots of the blast radii of each test and links to Nukemap, so you can see for yourself the resulting devastation. Feel free to play around with tonnage or use pre-defined devices. Each blast has a color coding which represents the following:

- The green areas are where unfortunate victims will receive 500 rem radiation dose. Without treatment, patients will suffer a 50%-90% mortality rate.
- The yellow area indicates the fireball radius.
- The pink/red ring indicates areas of 20 psi overpressure airblast. Buildings are demolished and fatalities are widespread.
- The gray ring indicates 5 psi airblast where stronger buildings resist the blast but casualties will be significant.
- The outermost orange area indicates where people will sustain 3rd-degree burns and flammable materials would ignite.

So without further ado, here is our list of 12 biggest nuclear tests in history in reverse order of yield. 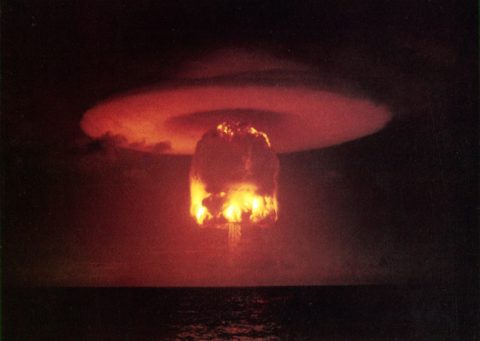 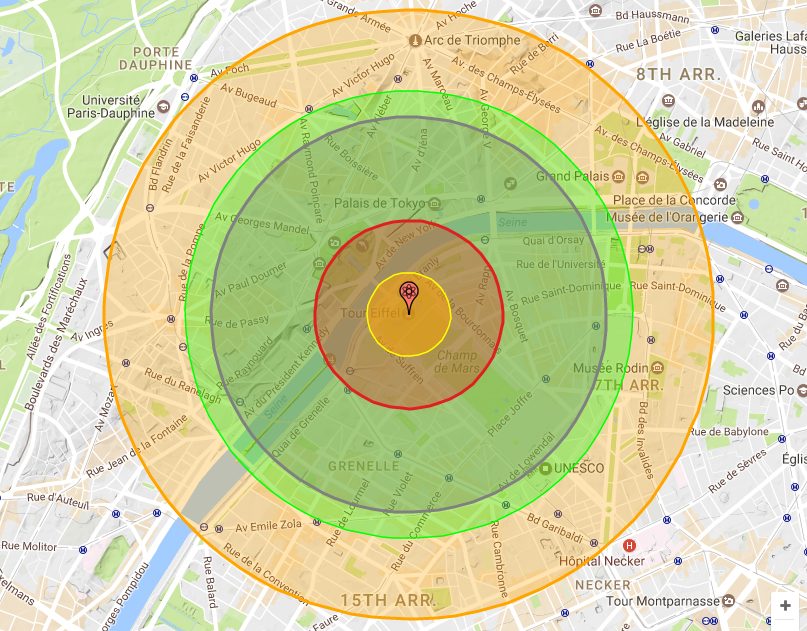 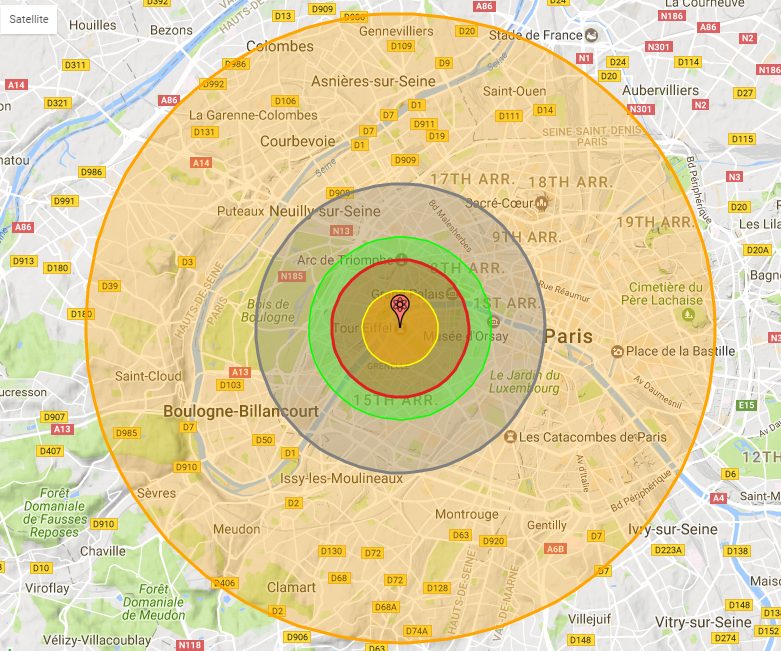 Date: August 25th and September 19th, 1962
Yield: 10 megaton
Location: Novaya Zemlya region of Russia, Artic Ocean
Distinguishing features: The blasts would have engulfed everything within a 3.45km2 radius, 3rd-degree burns would have been received over a 28.6km2 radius from the epicenter. 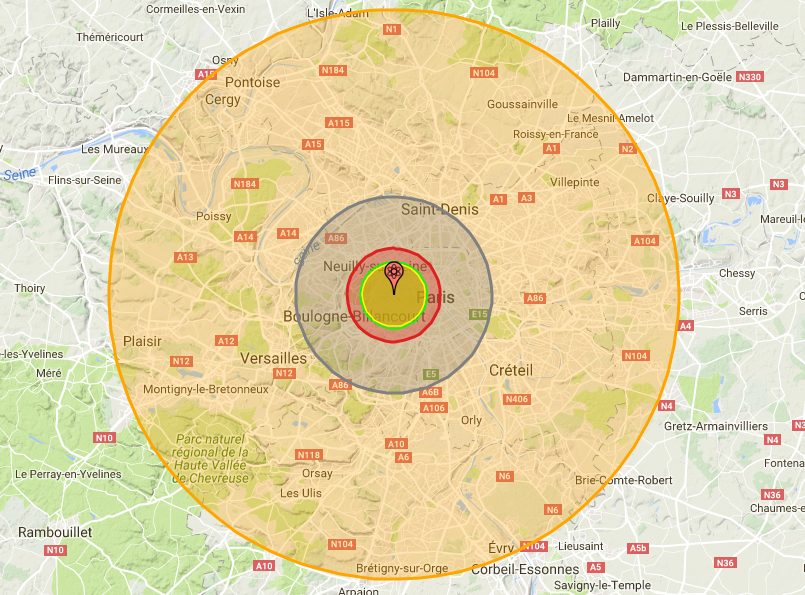 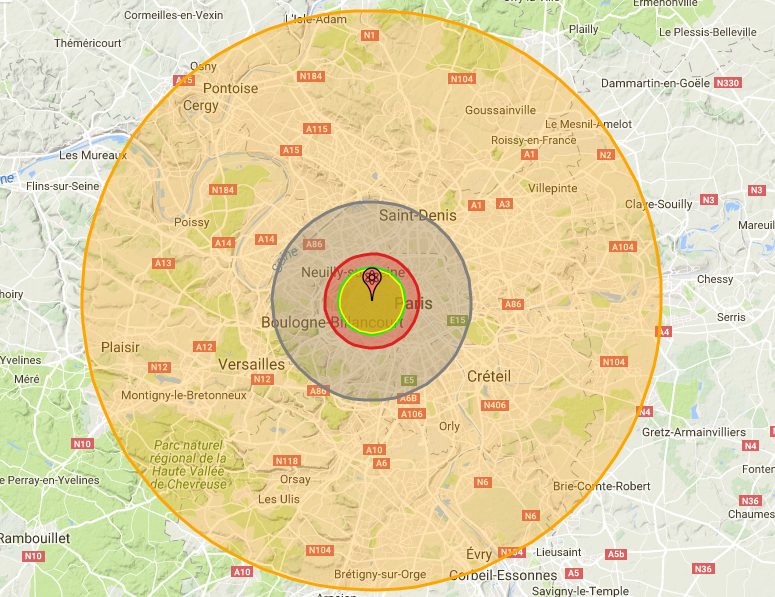 Date:  27th March 1954
Yield: 11 megaton
Location: Bikini Atoll
Distinguishing features: With a devastating fireball range of 3.28km2, this thermonuclear device was the first to be tested on a barge over open water as the US was fast running out of island test sites. 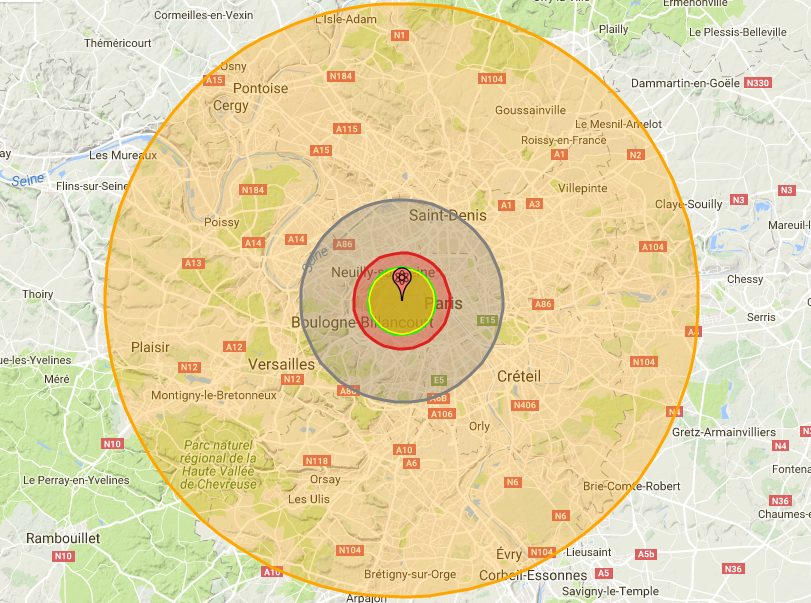 Date:  23rd October 1961
Yield: 12.65 megaton
Location: Novaya Zemlya
Distinguishing features: With a yield this size, everything within a 3.47km radius would be incinerated. Third-degree burns would be sustained within a 31.6km radius. No photos or footage have ever been released. 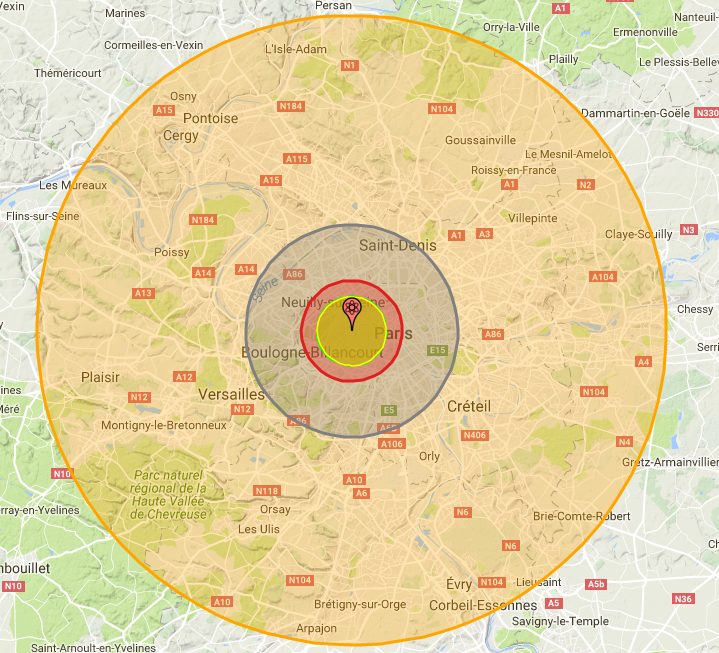 Date: 4th May 1954
Yield: 13.5 megaton
Location: Bikini Atoll
Distinguishing features: This was the second strongest of the Castle series of nuclear tests. After the detonation, the fallout actually reached Mexico City. 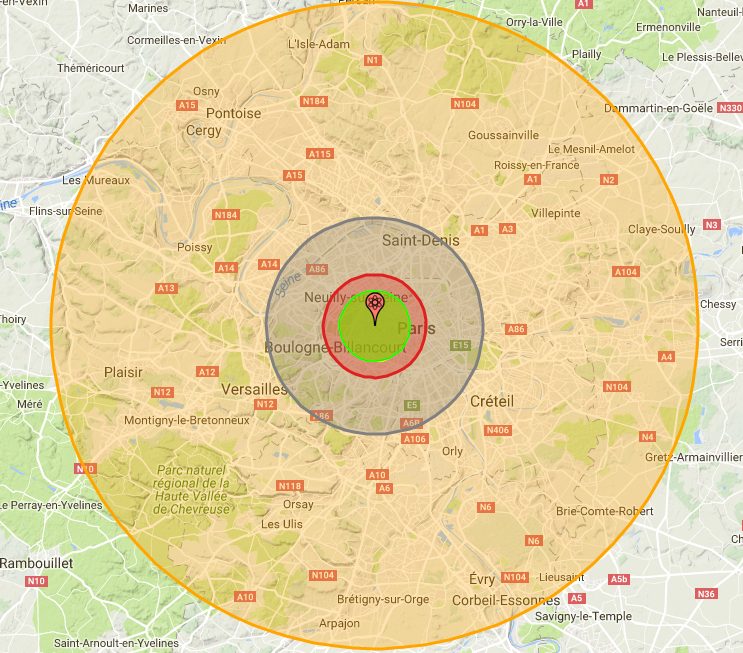 Date: 28th February 1954
Yield: 15 megaton
Location: Bikini Atol
Distinguishing features: Originally anticipated to have a yield of 6 megatons, the bomb produced a staggering 15 megatons when detonated. This miscalculation resulted in the irradiation of inhabitants in the Marshall Islands, some Japanese fisherman were even exposed 80 miles away. 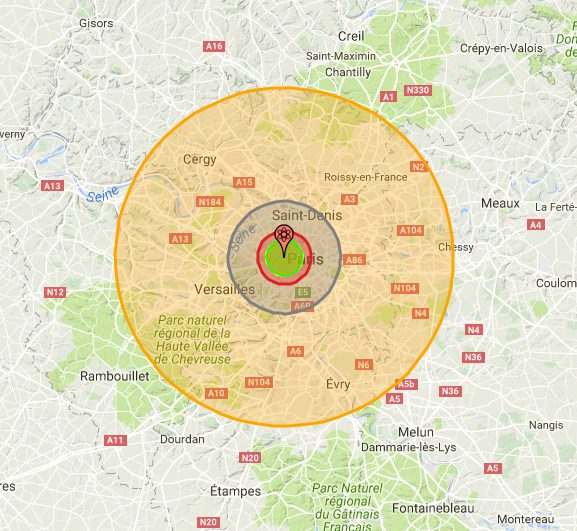 Date: Between 5th August and 27th September 1962
Yield: 20 megaton
Location: Novaya Zemlya
Distinguishing features: This series of bombs were the fifth, fourth and third strongest detonations in history. All three were around 20 megatons, that's 1000 times bigger than the Trinity Project. Bejesus. 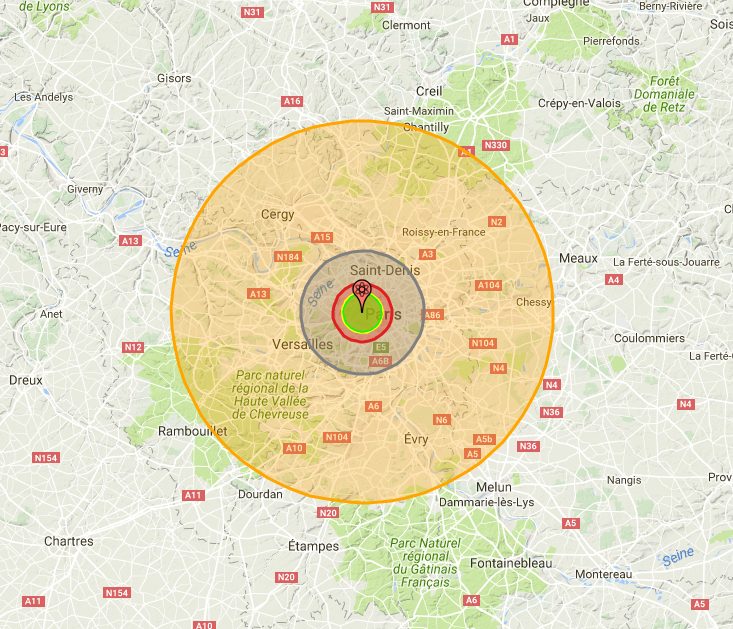 Date: 24th December 1962
Yield: 24.2 megaton
Location: Novaya Zemlya, once again
Distinguishing features: Building on the test blasts earlier in the year, the USSR stepped up their yield to 24.2 megatons. This blast would have a bigger fireball than three Trinity Projects combined - Holy cow! 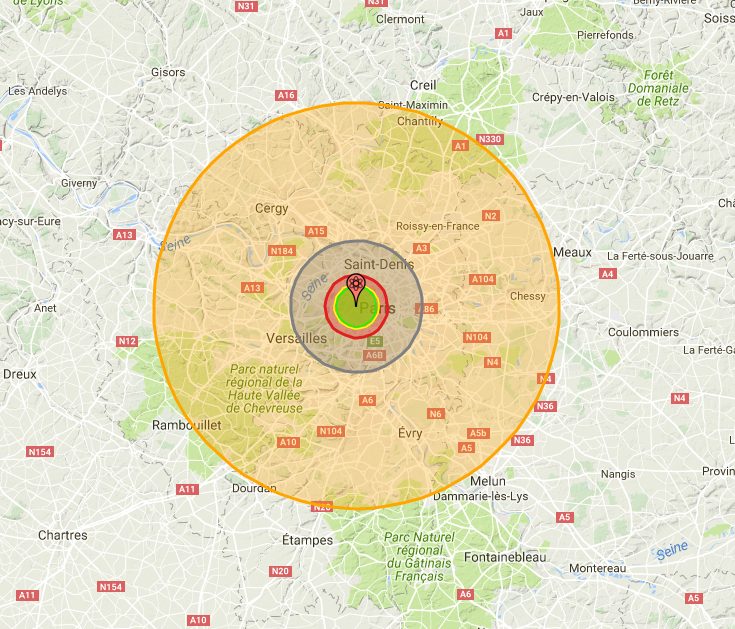 Date: 30th October 1961
Yield: 50+ megaton (57 megatons claimed)
Location: Novaya Zemlya
Distinguishing features: This was the largest nuclear test ever conducted. You'd not be surprised to learn that it is also the world's biggest man made explosion in history. The light from the blast could be seen over 630 miles away. 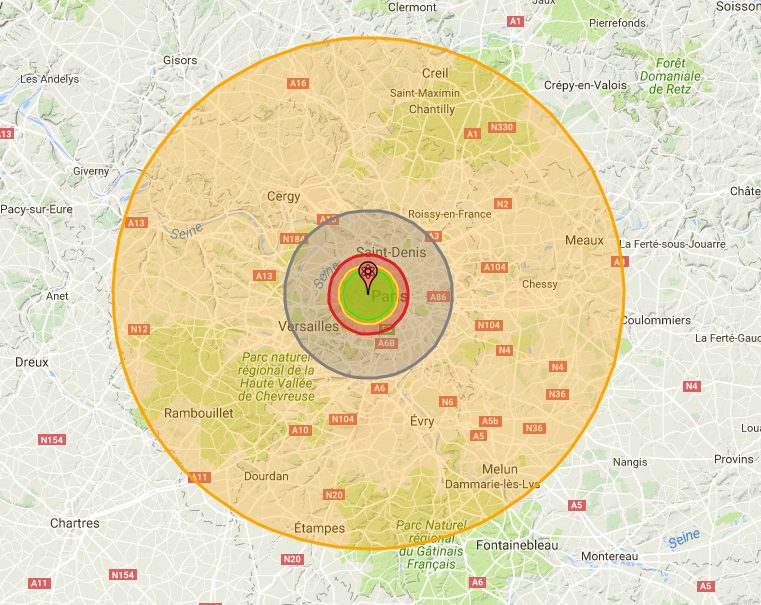 Tsar Bomba had a bigger brother that was designed but never built. It would have had a yield of around 100mt. It was never tested as the nuclear fallout would be so huge that the delivery aircraft wouldn't be able to escape in time. 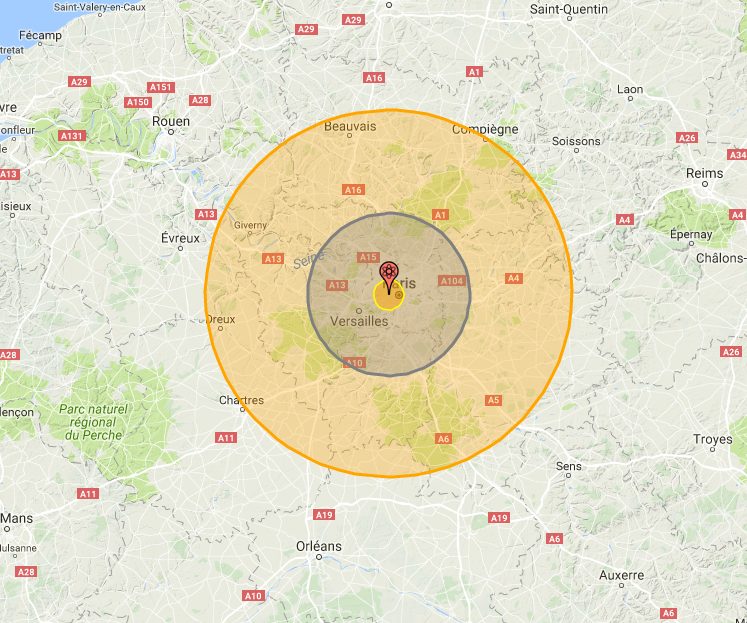 So there you go, our list of the 12 biggest nuclear tests in history. Are you scared yet? Most current arsenals have yields ranging between 45 kilotons to 9 megatons to give you an idea. An improvised, so-called "dirty bomb", would have a yield of around 100 kilotons of TNT.

We have attempted to capture the most notable and largest detonations in history but would love to hear if we have missed any. What would you include on the list? And why? Let's start a conversation.

SEE ALSO: The Essential Guide to Surviving a Nuclear Attack

16 stunning photos of the X-15, the fastest plane in US history