Jupiter now has more moons than any other planet in our solar system, bringing the total to 79 moons.

Jupiter just got a little more crowded. Researchers announced they found 12 new moons for the planet, including one they're dubbing an "oddball."

This now brings the total number of moons around the planet to 79 -- the largest number of moons of any planet within our solar system. The discovery is thanks to a team led by Scott Sheppard of the Carnegie Institution for Science who first noticed the moons in Spring 2017. The moons were accidentally discovered while looking for massive planets beyond Pluto.

"Jupiter just happened to be in the sky near the search fields where we were looking for extremely distant Solar System objects, so we were serendipitously able to look for new moons around Jupiter while at the same time looking for planets at the fringes of our Solar System," said Sheppard.

Gareth Williams works at the International Astronomical Union's Minor Planet Center, and he used the team's observations over the years to figure out the orbits for the newly spotted moons. 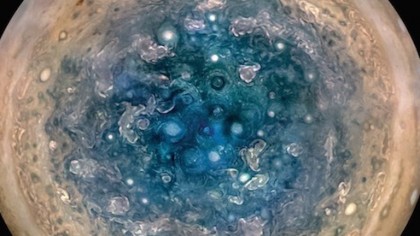 "It takes several observations to confirm an object actually orbits around Jupiter," Williams said. "So, the whole process took a year."

Nine of the moons can be found in the outer swarm of Jupiter's moons. They exist in retrograde -- going the opposite direction of Jupiter's spin rotation. Those retrograde moons are then further grouped into three distinct sections. The researchers think they're what's left of three larger bodies that broke apart after running into comets or asteroids. The retrograde moons take roughly two years to orbit the planet.

Another two moons rest in an inner section of moons that orbit in prograde. Thus, they orbit in the same direction as the planet. Those inner moons have similar angles and orbital distances around Jupiter. The researchers think these moons are also fragmented remnants of larger moons broken apart after colliding with another body. The two inner moons take less than a year to orbit Jupiter.

The moon that's really captured the research team's attention, however, is a small moon less than a kilometer in diameter. This outlier is like no other moon orbiting Jupiter.

"Our other discovery is a real oddball and has an orbit like no other known Jovian moon," Sheppard explained. "It's also likely Jupiter's smallest known moon, being less than one kilometer in diameter."

This oddball is a bit more distant than its prograde brothers, and it takes about a year and a half to orbit Jupiter. Unlike other prograde moons, it also crosses paths with the retrograde moons, meaning it has a much higher chance of colliding with them in time.

"This is an unstable situation," said Sheppard. "Head-on collisions would quickly break apart and grind the objects down to dust."

Even oddballs need names. The researchers proposed naming the unique find Valetudo after the Roman god Jupiter's great-grandaughter. Valetudo was known for being the goddess of health and hygeine.

Sheppard and his team hope to further explore what could've caused these moons to form in order to get a better understanding of how the planet itself formed -- and ultimately, more about how the rest of our galaxy came to be.

GM Strikes Deal For One of US' First Lithium Mines