13 Amazing Battery Innovations That Could Change The World

Batteries are an integral part of our lives and will only become more so as we turn away from fossil fuels. These battery innovations have the potential to change the way we store and use the power.

We use batteries in almost every device we use, from the humble tv remote to your powerful smartphone. There have been considerable advancements in battery technology over the last decade ,but there is still a long way to go until we can safely and efficiently store and use energy. 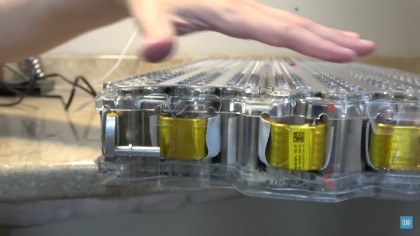 While Tesla and other companies strive on with lithium-ion battery development, scientist and researchers all over the world are developing all sorts of batteries for applications in everything from global power to water pumps.

Read on for a list of amazing battery innovations that could change the world.

Researchers from the University of California Irvine stumbled across a method of using gold nanowires housed in a gel electrolyte that can withstand long-term recharging.  The result might be batteries that never break down.

Microsupercapacitotors are traditionally expensive to make, but students from Rice University have developed a way that dramatically reduces their cost.  By burning electrode patterns into sheets of plastic with lasers, the researchers have developed batteries that can charge faster and discharge slower.

Forget plugging in your devices to charge. uBeam is developing technology that could see fast charging over the air.  You'll never be caught short without charge if this technology is developed so furniture and even the bus stop could be a charging station.

4. Batteries made with sand

A summer holiday at the beach gave the spark for a researcher from the University of California Riverdale to investigate using sand instead of graphite in batteries.  So far the results are good and could mean a low-toxic type of battery could soon hit the market.

Imagine if the sweat formed from your run was powering your fitness tracker. This is well on the way to reality thanks to a breakthrough by researchers at the University of California in San Diego. The scientists have developed stretchable fuel cells that extract energy from sweat and are capable of powering electronics.

6. Energy harvested as you move

A triboelectric nanogenerator or TENG is a type of technology that can harvest power by capturing the electric current generated through contact of two materials. Breakthroughs in TENG mean we could soon self-power our devices just by moving around.

Prieto is set to launch a battery made of copper foam where the battery consists of 98% air.  Prieto explains that the 'anode and separator material is applied via electrodeposition. Then the cathode material is applied as a liquid slurry.' They are currently exploring market applications for their propriety technology.

Scientists from Harvard have developed a battery that stores its energy in organic molecules dissolved in neutral pH water. The technology could be used to store energy from renewable power sources like wind and solar with minimal maintenance.

9. Foldable battery is paper-like but tough

Jenax has developed a flexible battery that could be incorporated into clothing and vehicles.  The battery is tough and could have application in emergency situations.

Alcatel has teamed up with Sunpower to develop a transparent solar panel that could go over phone screens so devices can charge anywhere outside. The technology is slated for release in the near future.

Imagine generating electricity every time you went to the toilet.  Researchers from the University of Bath have developed a miniature fuel cell that can generate electricity from urine.  The innovation could mean affordable and renewable energy supplies for everyone with a bladder!

12. Recharge as you talk

What if talking on your phone actually recharged it? Nanogenerators that harvest ambient noise and convert it into electric current have been used in the development of a smartphone. One day chatterboxes won't even need a regular charger.

Israeli company Phinergy is developing a battery where one electrode is an aluminum plate, the other is oxygen. When the oxygen interacts with the plate, it produces energy. In theory, this kind of battery could extend the range of an EV to 1000 miles. But we'll just have to wait to see if the practical follows hypothesis.

World's Fastest EV Charger Is in the Works: A Full Battery in Under 15 Min