You ever come across a building and just think to yourself; how in the world did they build that? Sporadically, scattered throughout cities and towns around the world, you will occasionally come across an architectural design that leaves you scratching your head, but that also inspires you.

Architecture has come a long way over the centuries, evolving with the times. It impacts your life in more than just one way. Whether you are living in a small town or massive city, architects, developers, and civil engineers came together to bring the surrounding areas into fruition.

Even more so, there is a good chance that there is a group of architects working in different ways to expand your city, either through new buildings or an entirely new area. But what happens when an architect looks beyond just the essential functions of a building; when an architect gets truly creative and maybe a little wacky?

Most of the time? You get something that is awesome, iconic, and engaging. This is what we are looking for today, buildings that make us do a double-take, that are imaginative, maybe even chaotic, but intentional. However, you might be asking yourself, why even create buildings like these? As hinted above, architecture plays a special role in our lives and is important for various reasons.

One area of architecture that may be overlooked by the average bystander is the economics of it. Ideally, architects want to create a building that is low in cost, but that will drive economic flow to the surrounding area, town, or city. Will people around the city come to visit my building? Who outside the city will be interested in my building? Secondly, structures play a big role in the overall quality of life in the surrounding area. 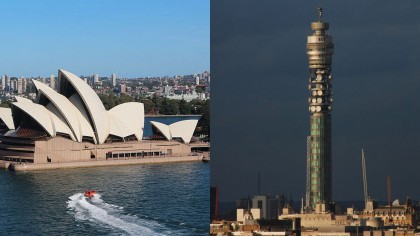 The rightly designed building or buildings can elevate an area, improving the lives of the people. Finally, architecture is usually a symbol of progress for the designated area or a city's aspirations for the future. You have seen a lot in cities like Dubai and Singapore. The architectural oddities on this list do all of that and more. They are creative architectural "flexes," designed to inspire people, to make people think, and help improve the quality of life for the people in the cities. Let's take a look.

This building either looks like something out of Alice and Wonderland or has been warped by space-time, depending on your pop culture perspective. This is no ordinary shopping center.

Designed by the creative Polish architects, Szotyscy & Zaleski, the building takes its inspiration from the fairy-tale illustrations and drawings of Jan Marcin Szancer and Per Dahlberg. Almost cartoonish, the building looks like it's been smashed together. Completed in 2004, Krzywy Domek features stunning stained glass entrances, stone elevation decors, and even window frames with sandstone.

It is considered by many to be one of the most iconic buildings in the world.

The late Zaha Hadid has always dazzled the world with her work, creating some of the most important memorable architectural buildings in recent history. You might know a lot about her commercial work, but what do you know about The Capital Hill Residence? Her only private residential home, the 140 million dollar project, looks like something out of a Star Wars film, even looking like a spaceship itself.

Located about 3 kilometers outside of Moscow in the Barvikha forest, the building was developed for the wealthy real estate developer Vladislav Doronin. The dream home is 36,000 square ft, partially submerged underground, and features an eye-catching tower with 360-degree views of the surrounding area. A tower perfect for a Bond villain.

You know Gaudí when you see it. Antoni Gaudí is one of the most influential architects in history. His love for nature, and organic structures, manifested themselves in his design, giving a very unique look. Casa Batllo is one of those buildings. This design was actually a restoration of a house that was originally built in 1877.

Take a look at the home, and you see Gaudí's signature all over it, featuring elements of Catalan Art Nouveau, ceramics, stone, and forger iron. Some other distinct features of the building include bone-like columns on the façade giving the building the local nickname Casa de Los Ossos, or House of Bones.

Want to see a building dance? In 1945, a 19th-century building was destroyed during a bombing of the city of Prague. Years later, Dancing House would go on to take its place. Beginning construction in 1994, the building was designed by the collaborative team Croatian-Czech architect Vlado Milunic and Canadian architect Frank Gehry.

The architectural building that the powerhouse designed was controversial for the more conservative Czech people. Nevertheless, the Dancing House would eventually be embraced by people around the world, and its local Czech audience. But, where does it get its name? The architecture of the building is supposed to convey a pair of dances moving together across the dance floor.

Dancing House features a gallery, a stunning coffee shop with views of Prague, and a highly rated French restaurant.

The Flatiron building is easily one of the most iconic buildings on this list. If you ever travel to New York City, you are going to have to take a picture in front of this historic building. As one of the first skyscrapers in New York, the building officially opened in 1902, standing 87 meters high and 22 floors. The width of the building is what attracts people as the building itself looks as if it is splitting New York City right down the middle.

Dubai is up again, but what did you expect? The city is home to the tallest building in the world, a seven-star hotel, and the only human-made archipelago modeled after the seven continents.

Comfortably sitting on a two-story podium, the 22-story commercial tower has a very distinct design. Its lace opening design is created by its 40 centimeter-thick concrete shell perforated by over 1,300 openings that create a lace-like effect on the building's façade. Aside from aesthetics, the shell performs a very specific function, acting as a "sunscreen," open to light, air, and views. The building even features solar technology to make it more sustainable.

The Louis Vuitton Foundation is one of the most famous buildings in the city of Paris, costing a massive $140 million. The non-profit is an art museum and cultural center sponsored by the LVMH Group. The cascading exterior looks as if it grew from the ground, and has become a hub for some of the most important cultural, design, and art exhibitions in recent years.

Next time you are in Paris, you have to make your way to the Louis Vuitton Foundation.

Designed by the ambitious architect, Jeanne Gang, the building began construction in 2007 and was completed in 2009. Having well over 50.000 square meters in floor area, for shops and offices, the wavy building stands 250 meters tall. The concrete floor slabs give the building its unique sculptural look, resembling the fluidity of water under the right sunlight. Currently, the building is the world's tallest building designed by a woman.

The building has those organic features seen in Gaudí's work merging  Gothic with curvilinear Art Nouveau forms and his own geometric style. You have to see La Sagrada Familia at some point in your life. Nevertheless, the building is currently under reconstruction and is not expected to be finished until 2026.

The Blur building came into fruition in 2002 for a Swiss Expo, making headlines around the world for very literal atmospheric architecture. Described as walking into a cloud, the architectural feat of this building is that the primary construction material of the building is water. Entering the cloudy building via a 400-foot bridge, the misty terrain is created by the pumping of water from the surrounding lake by 30,000 high-pressure nozzles. If you ever wanted to walk on a cloud, now is your chance.

The building was created by the Iranian architect  Fariborz Sahba, designing it in the shape of a lotus as it is common to several religions, including Hinduism and Buddhism. It gets about 10,000 visitors daily and is part of a larger network of religious buildings that are located in Sydney in Australia, Panama City in Panama, Apia in Western Samoa, Kampala in Uganda, Frankfurt in Germany and in the USA.

Dubbed the most "romantic building in China", the architectural building is extremely iconic throughout the region. People travel far and wide to the piano and violin-shaped building. Completed in 2007, the building features a violin attached to what looks like the world's largest piano. In fact, that violin serves as an entry point into the piano style building featuring both stairs and an escalator.

The building was brought into fruition by architectural students at the Heft University of Technology in collaboration with the Huainan Fangkai Decoration Project with the aims of improving the economy and tourism of the city. Now, the building serves as a practice area for musicians that attend the local colleges in the area and is a massive tourist spot.

Like a stairway to heaven, this unique skyscraper very literally spirals towards the sky. This sustainable landmark in Dubai is one of the more elegant oddities on our list. Dubbed, the Dynamic Tower, the eco-friendly building, has 80 plus floors. However, its height is not its most impressive feature. These floors can rotate independently, making the building a living and breathing architectural piece.

Even more interesting, about 90% of the building was manufactured at a factory before it was constructed at the original construction site, helping to cut labor and waste costs. Finally, the building is solar, wind-powered, with its wind turbines located between two consecutive floors. Would you live in a rotating tower?

Do you have a favorite architectural oddity?