Here is an overview of Seoul's most impressive buildings. From towering skyscrapers to college campuses, the South Korean capital is home to a wealth of innovative architecture.

Seoul is home to some of the most unique and innovative buildings in the far east. Almost half of South Korea's population lives in the Seoul Capital Area, making it one of the largest metropolitan areas in the world. With such a large population to cater to, the city depends on modern, innovative, and sustainable architecture. Here are just some of the city's stand-out structures.

Measuring over 1,800 feet (554.4 meters), Seoul's Lotte World Tower currently holds the record of being the tallest building in South Korea, as well as being the fifth tallest worldwide.

Designed by Kohn Pedersen Fox, the tower is comprised of retail outlets, offices, apartments, and even a luxury hotel. The impressive structure can withstand earthquakes measuring 9 on the Richter scale, as well as winds of up to 80 miles per second.

2. The Samsung Town: A Trio of Iconic Skyscrapers

Located near Seoul's fashionable Gangnam district, Samsung Town is the headquarters of the Samsung corporation. Rather than settle for one building, the company's HQ is spread over three skyscrapers.

Designed by Kohn Pederson Fox, the integration of all three buildings was inspired by traditional Korean woodworking.

3. The Ewha University Campus Center by Dominique Perrault: French Touch in the City

In 2008, Seoul's Ewha Women's University was treated to an exquisite new campus center, courtesy of French architect Dominique Perrault. The design was chosen as the winner of a 2004 competition held to find a new architectural concept for the campus.

The center blends into the existing hillside, creating a bustling center of activity while maintaining much of the natural topography. It includes a two screen cinema, fitness center, and theatre, and can accommodate up to 22,000 students.

4. The 63 Building: The Tallest Gold Structure in the World

Officially known as 63 SQUARE, this gold-clad giant towers over Seoul's Han River. To date, it is the tallest gold-clad structure in the world.

It was built to commemorate the 1988 Summer Olympics, and designed by Helen W Som and Harry D Som. The subtle curves of the building's exterior are meant to resemble the Hanja character for "human" or "person".

It's home to one of the world's highest art galleries, as well as an aquarium, an IMAX theater, and a convention center.

5. The Dongdaemun Design Plaza by Zaha Hadid: Blending Past and Future

The plaza was designed by Zaha Hadid, whose "Metonymic Landscape" concept was awarded the 2004 Pritzker Prize. Hadid's intention was to create a cultural hub that integrated the area's history, while still remaining modern and environmentally conscious.

Construction was completed in 2011, and the finished structure includes a water recycling system and solar panels.

6. The Seoul National University Museum of Art by Rem Koolhaas: Bright and Atmospheric

Designed by Rem Koolhaas, the Seoul National University Museum of Art is the first university art museum of its kind in South Korea. Dedicated entirely to modern and contemporary art, the museum offers educational programs that are open to the public.

Its facade is constructed of U-glass to maximize natural light. Additionally, the building is cantilevered on its core in order to accommodate the ramped seating of its auditorium, and also to create an airy, weightless atmosphere.

Seoul's City Hall is a perfect example of the city's melding of old and new architecture. The original stone building was completed in 1926 in Neo-Classical style, whereas the more modern structure was opened to the public in 2012.

The old building has been converted into a library, while the new building houses the city government.

Great efforts were made to ensure the new building was environmentally-friendly. Over 28% of the energy used in the building comes from renewable resources, such as solar thermal and geothermal. In addition to this, the city hall is also home to a vertical garden containing 70,000 plants, which stretches from the first to the seventh floor.

8. The Kring Kumho Culture Complex: Futurism at its Finest

Unveiled in 2008, Unsangdong Architects' Kring Kumho Culture Complex is easily one of the most striking Seoul buildings on this list. 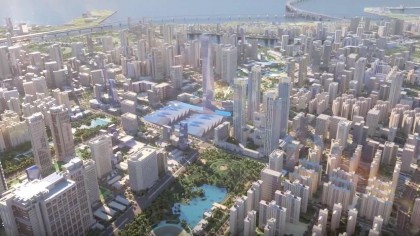 Usangdong have made a name for themselves as an experimental architectural cooperative, and Kring Kumho is a perfect example of their unusual and cutting-edge aesthetic.

Clad in steel with rippling circular windows, the complex is home to offices, conference rooms, and an exhibition space.

The interior is every bit as futuristic as the facade, with stark white walls giving way to high ceilings, cylindrical glass walkways connecting different spaces, and a suspended tunnel on the third level.

9. The Sebitseom: Floating Islands of Art and Culture

These man-made islands sit atop Seoul's Han River, with each island boasting its own brand of cultural events and specific design.

A fourth, land-based part of the complex - Yevit - contains a multimedia art gallery.

10. The Leeum Samsung Museum of Art: A Collaboration of Three Renowned Architects

Seoul's Leeum Samsung Museum of Art was unveiled in 2004, having been designed in partnership between Mario Botta, Jean Nouvel, and Rem Koolhaas. The museum comprises of two main buildings - one dedicated to traditional Korean art, the other to contemporary art. Botta and Nouvel each designed a museum building, while Koolhaas was responsible for the museum's Samsung Child Education and Culture Center.

Botta drew inspiration from Korean terracotta in his designs, while Nouvel's glass and rusted steel compliment the contemporary art housed within his building.

As the second highest point in Seoul, the Namsan Tower stretches a remarkable 777 feet (236.7 m) from base to tip, sitting atop the Namsan mountain.

The incredible structure houses four observation decks which give panoramic views of the city, along with restaurants, gift shops, and a teddy bear museum.

Originally designed as a communications tower in 1969, it has been open to the public since 1980.

12. The National Museum of Korea: Walk Through Korea's History

Located in Seoul's Yongsan District, the National Museum of Korea is an imposing building whose layout maps the history of the nation. The left wing of the building represents the past, with the right looking towards the future.

The open floor of the museum's main plaza was inspired by traditional Korean maru.

Currently, the museum is working towards becoming a green energy building. Its energy-saving system includes a waste heat recovery system, as well as a rainwater utilization facility.

As the largest performing arts complex in Seoul, the Sejong Center can hold audiences of up to 3,000 people.

It was designed by Um Duk-Moon and Pyung Goo Rhee, who envisioned the building to be a mixture of Korean and Western styles. The original structure was built in 1974, but was later remodeled in 2007 to ensure the highest levels of comfort and enjoyment for guests.

Seoul continues to push the boundaries of architecture and design, from recent developments that utilize carved facades to create natural ventilation to dreamy environmental concepts that could change the city's landscape. The South Korean capital is definitely ahead of the curve, and continues to prove itself as a modern, forward-thinking city.