You can find statues just about everywhere, however some statues are a little more creative than others.

Public art manifested in the form of a  sculpture or statues has been a huge staple of humanity with these projects embodying the time period in which they were created.

Though underappreciated at times, there is a very good chance that you have a statue somewhere in your hometown; a public piece of art that embodies the character of your city.

From the crowded streets of New York to the history-rich squares of Rome, you can find sculptures just about anywhere. 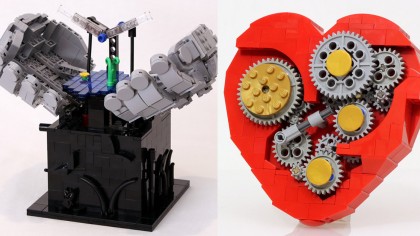 These 12 Kinetic LEGO Sculptures Will Inspire You

As society has evolved across technology and politics becoming much smaller for the average person, even more, creative sculptures have appeared capturing the changing times, telling stories, making statements, and impacting the cities they appear in.

As stated by Malvina Hoffman, “ Sculpture is a parable in three dimensions, a symbol of a spiritual experience, and a means of conveying truth by concentrating its essence into visible form."

"It must be the reflection of the artist who creates it and of the era in which he lives, not an echo or a memory of other days and other ways.”

Found in countless cities around the world, if you came across this statue, it probably left some impression on you.

Inspired by the hurricanes he had seen around the globe, Quinn’s statue features and bronze imagining of mother nature hurling a stainless steel representation of Earth.

Probably one of the most famous statues on this list, Les Voyageurs is a sculpture known across the globe. Found in the beautiful Marseilles, France, the sculpture was created by French artist Bruno Catalano.

This sculpture was created to capture the essence of what it means to travel. The two figures represent the memories and parts of selfhood that travelers leave behind.

If you are not a fan of spiders, this sculpture may creep you out a bit.

Created by the late Louis Bourgeois, this sculpture showcases her own jealousy, anger, fear and her own painful childhood, putting it all on display in front of the Guggenheim Museum in Bilbao, Spain.

Need a giant spoon? Then head over to the city of Minneapolis to get your hands on one of the biggest spoons on the world.

The playful Spoonbridge and Cherry sculpture is a massive piece in the city's sculpture garden.

This sculpture was brought to life by Claes Oldenburg and Coosje van Bruggen.

Another fan favorite, the Digital Orca looks like something out of an 8-bit video game.

Created by Douglas Coupland, this sculpture can be found in the Canadian city of Vancouver overlooking the harbor and the mountains of Cypress Provincial Park.

The digital looking art piece was created with steel armature with aluminum cladding and black and white cubes. This is definitely a piece you should add to your bucket list.

Jeff Koons is one of the greatest artists of this generation, creating pieces that have captured the world’s attention and imagination.

Using is signature balloon aesthetic, the artist has created a piece that is part of the new World Trade Center in New York City, set in the shadow of the new building.

Like a building sinking into the pavement, this Petrus Spronk art piece will definitely give you something to think about.

Dubbed The Architectural Fragment, this sculpture looks like a sunken building in the ground.

According to Spronk, the piece is supposed to represent, the downfall of civilization and the power of the present.

Another powerful political statement, the Knotted Gun embodies the hopeful promise of a nonviolent future.

Created by Carl Fredrik Reuterswärd, the piece was commissioned by Luxembourg as a gift for the United Nations.

Found in the city of “brotherly love”, Philadelphia, the Freedom Sculpture has a message that everyone can relate to across the globe.

Created by Zenos Frudakis, the 7000-pound sculpture embodies breaking free of those things that are holding you back, growth, and freedom.

The sculpture was completed back in 2001 and is a huge staple of the city of Philadelphia.

The city of Chicago is known for a lot of things; hot dogs, pizza, frigid temperatures, and relentless wind.

Nevertheless, one of the biggest connections to the city has to be Cloud Gate by Anish Kapoor.

The 110-ton sculpture known as the bean is just as famous as the city of Chicago. Placed in the city’s skyline, the reflective sculpture hosts a 12-foot high arch and measures 66 feet long and 33 feet high.

Set in the richly historic city of Prague, the political artist David Černý has created a sculpture that is a little different from the other sculptures mentioned on this list.

The massive head has the ability to move by itself, distorting its face by rotating its stainless steel layers by 360 degrees.

You have probably heard of having a green thumb but what about a bronze thumb?

Designed by French artist Cesar Baldaccini,  the statue shoots up from the pavement in front of the Centre Pompidou Modern Art Museum staying true to the museum's theme of humans, animals, and insects.

Another major tourist attraction in Philadelphia, the oversized Clothespin is an eye-catching piece in the city.

Created by the Swedish-born sculptor Claes Oldenburg, the massive sculpture sits out in front of the city’s very historic Philadelphia City Hall.

Do you have a favorite sculpture? Please leave a comment or picture below and enjoy your holidays.