13 of the Most Deadly Diseases in Human History

Amid the current pandemic outbreak, we decided to take a look at some of the most deadly diseases that had serious impacts on history.

Amid the far-reaching global impact of the coronavirus, Bill Gates recently described COVID-19 as the “once-in-a-century pathogen we’ve been worried about.” After the recent explosions of case numbers over the last couple of weeks, and as confirmed by Bill Gates in his article for the New England Journal of Medicine, COVID-19 has had a tremendous impact on our planet. This is not just because of the quarantine but because of how dangerous the virus is.

“There are two reasons that COVID-19 is such a threat. First, it can kill healthy adults in addition to elderly people with existing health problems,” says Gates. “The data so far suggest that the virus has a case fatality risk around 1%; this rate would make it many times more severe than typical seasonal influenza, putting it somewhere between the 1957 influenza pandemic (0.6%) and the 1918 influenza pandemic (2%).” 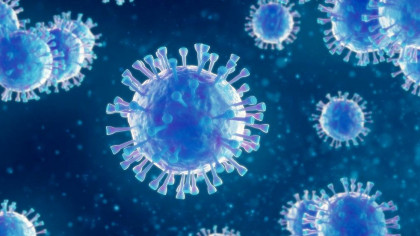 Comparing the COVID-19 Coronavirus to 7 Other Infectious Diseases

Currently, there are 1,364,271 COVID-19 cases, 76,439 deaths, and 293,843 recovered patients. Physical distancing measures in various countries have helped slow the spread of the disease. Though things are up in the air regarding when the world will return to normal, if history has taught us anything, humanity will make it through this, with researchers working day and night to develop treatments.

As you have probably recently learned, contagious diseases have shaped the world and our history, impacting the environment, global economies, and even how humans evolve. Today we are going to explore some of the world’s most infectious diseases.

Do you remember the Ebola scare a couple of years ago? Though the disease is very rare, it is extremely deadly, often a fatal infection to those who get it. Caused by one of five strains, the Ebola virus usually spreads through a human's bodily fluids with most people getting the disease by touching the surfaces of clothing that are contaminated by these fluids. Ebola is known to spread extremely fast, rapidly taking over the body's immune system causing muscle pain, headaches, weakness, diarrhea, vomiting, and even bleeding from the mouth and nose.

With an average fatality rate of about 50% and with a case fatality rate varying from 25% to 90%, Ebola is truly terrifying. A recent outbreak of Ebola caught the world’s attention in 2014 and lasted until  2016. As many as 11,325 people died during the outbreak while 28,652 people said to have been infected by the disease.

In 2018, there was also another outbreak in the Democratic Republic of Congo that took the lives of well over 2,000 people. Combating Ebola is not easy as there is no proven treatment for the virus. Yet, there are currently experimental vaccines and treatments being tested to combat future outbreaks.

First identified in 1967, the Marburg virus shares some similarities with ebola because of its ability to also cause hemorrhagic fever. In short, this means that people that have the Marburg virus suffer from similar symptoms like fever and bleeding throughout the body. If not properly treated, the disease can lead to a series of organ failures and eventually death. When the disease first appeared in 1967 in a lab, the mortality rate hovered around 25%. Yet, when the disease reappeared between 1998- 2000, that number skyrocketed to above 80%.

Some researchers have argued that Smallpox could make a comeback. Yet, as of 1980, the World Health Assembly declared that the world is smallpox free. Historically, smallpox is considered to be one of the most dangerous and historic diseases. Caused by the variola virus, the disease produces a characteristic rash, particularly on the face, arms and legs. Before the vaccine in the 1980s, Smallpox existed for 3,000 years and was one of the most feared diseases in history. Only in the 20th century, smallpox is believed to have killed 300 million people. Smallpox is still talked about as both the WHO and countless governments around the world believe that viruses could be deliberately released to cause harm.

Mosquito-borne diseases kill millions of people each year. One of the most devastating diseases affecting the world is Dengue. The deadly infection claims the lives of 50,000 people each year. The viral infection appears in its victim after being transmitted by the bite of an infected Aedes mosquito, with symptoms usually appearing 3-14 days after the infective bite. Even more so the disease affects people of all ages as each person battles flu-like symptoms, which at times can lead to dengue hemorrhagic fever, which could also include symptoms that include fever, abdominal pain, vomiting, bleeding, and trouble in breathing. At the moment there are no treatments for Dengue.

Also known as HPS, Hantavirus pulmonary syndrome caught the attention of the United States back in 1993 when a healthy young man died of the disease after only a couple days of experiencing shortness of breath. The rare but very deadly disease is caused by a virus that a person gets from getting in contact with the droppings, saliva, or urine of a rodent. People who have been unfortunate enough to get the disease have experienced fever, chills, muscle aches, or gastrointestinal symptoms. Thankfully the researchers were able to isolate the virus after the death of the young man. Yet there have been 600 cases in the U.S. of people contracting HPS with a 36% mortality rate.

It is one of the most terrifying diseases on this list. Referring to the inflammation of the meninges, or the membranes that cover the brain and spinal cord, the disease can be caused by a wide array of things that include but are not limited to fungi, viruses, and bacteria. Viral meningitis can be spread through the sharing of bodily fluids. Even kissing can spread bacterial meningitis. When not treated immediately meningitis can have a mortality rate as high as 50%.

Another mosquito based disease, the world health organization has estimated that there have been 228 million cases of malaria in 2018 alone, with most cases occurring in the African Region. About 405,000 people died in 2018 from this curable and preventable disease due to the massive influx of mosquitoes in the region. The parasite makes its way from mosquito to host, causing those infected to experience severe flu-like symptoms, which in turn can lead to serious complications. At the moment, leading private organizations, WHO, and governments are working hard to dramatically drop the number of cases of the infected each year.

SARS, the severe acute respiratory syndrome, caused the deaths of 750 people in a pandemic in 2002 and 2003. The current belief is that just like other deadly diseases like Ebola virus, Marburg virus, and MERS, the disease originated from bats, with the first infected appearing in the Guangdong province of southern China in 2002. Symptoms of the disease include fever, malaise, myalgia, headache, diarrhea, and shivering.

During a typical season, up to 500,000 people worldwide die from Influenza. However, as we have seen new flu strains emerge causing a massive pandemic. One of the most deadly cases of flu to happen in recent history is the 1918 Spanish flu that sickened up to global 40% of the population eventually killing about 50 million people. Though some have argued that Coronavirus is the century virus that we have been waiting for, there is still a chance that we could experience a pandemic much worse than COVID-19 in the coming years. Simple things like washing your hands and getting a regular flu shot can help combat standard influenza.

When untreated, Cholera can be extremely deadly, killing within hours. Acute diarrhoeal infection is caused by eating or drinking food or water that is contaminated with the bacterium "Vibrio cholera" and is one of the most deadly diseases in developing countries. It is believed that there are 1.3 to 4.0 million cases of cholera with death numbers expected to be somewhere between 21,000 - 143,000. Upon drinking or eating infected food, symptoms tend to appear within 12 hours to 5 days. WHO is working on preventing cholera in countries is by collaborating with organizations to provide clean water and sanitation facilities.

Throughout the world, HIV is considered to be one of the deadliest viruses. Human immunodeficiency virus is considered by the World Health Organization to be a major global public health issue. HIV has taken the lives of 32 million people since it has been discovered. The virus targets the immune system destroying crucial cells in the body, drastically inhibiting your body from fighting infection. The cells, also known as CD4 cells, are hijacked by HIV replicating themselves inside in CD4 destroying the cells.

The good news is, there have been a lot of great breakthroughs in HIV research. According to the WHO, almost 40 million people are living with the disease, with a large portion of the infected able to manage it and live with it. Moreover, 2 people have just been cured of what was once thought of as the incurable disease thanks to a stem cell transplant.

Though rabies is not that big of a threat in the west, with most people having complete access to rabies vaccines for pets, in places like India or Africa rabies is a serious issue. The viral disease directly attacks the nervous system, affecting any warm-blooded animals, usually coming in contact with is salvia through a bite that breaks your skin, or even the entering of an existing wound. Interestingly, 40% of people bitten by suspected rabid animals are children under 15 years of age, while 99% of rabies transmissions are from dogs to humans. By 2030, the World Health organization aims to get human rabies-related deaths down to zero.

As we mentioned above, smallpox is erased from the world. However, the following ancient killer is still very much with us appearing in places around the world. Plague is an infectious disease responsible for wiping out about 33% of the population in Europe during the 14th century, about 50 million people. It is caused by the bacteria Yersinia pestis carried by small mammals and their fleas.

Taking septicaemic and pneumonic forms the deadly disease can have a case-fatality ratio of 30% - 100% if left untreated. Countries like the Democratic Republic of Congo, Madagascar, and Peru have all reported cases of Plague. In fact from 2010 to 2015 there were 3248 cases and 584 deaths reported worldwide.

Be sure to be safe out there and take the appropriate precautions while in quarantine. Check out the World Health Organization website for more facts about COVID-19 and our Latest Updates on the Coronavirus Disease article.