1,300 People Are Stranded off Coast of Norway After Cruise Ship’s Engine Fails

Passengers are currently being evacuated amid the areas bad weather conditions.

Currently, there are 1,300 passengers being evacuated from a stranded cruise liner off the rough seas of Norway. Tug boats are in the process of trying to move the cruise ship to shore following the boat's engine failure, says news officials.

Yesterday, The Viking Ship sent a distress signal due to its engine problems triggered by bad weather in the region.

Floating in the rough seas in Hustadvika area on the western coast of Norway some rescuers were battling waves as high as 6-8 meters or approximately 19-26 feet, and winds as high as 90 km.

The biggest issue right now is to find a way to safely rescue passengers amidst the bad weather and worsening environment. The waves are making it difficult for tug boats and rescue boats to rescue victims, with even some them getting temporarily standard.

Helicopters are currently airlifting passengers and crew members one by one with the entire process expected to continue throughout Sunday. So far Norway's Joint Rescue Centre has rescued 338 people.

Though there have been no major injuries reported, at least eight people were hospitalized for minor injuries. 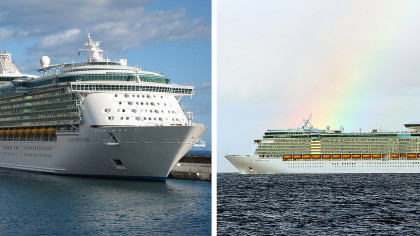 Top 10 of the Largest Cruise Ships in the World

Comprising mostly of both British and American Tourists, passengers have taken to social media to post the event as they wait for rescue. People still on the Viking Ship are being served food and water while they wait.

Currently, there are five helicopters deployed in rescuing passengers with the potential of more assisting. The Norwegian Red Cross will also be aiding passengers back on the shore and the evacuees are being processed onshore at the Brynhallen indoor sports stadium.

Passengers are then being taken to hotels in Molde and Kristiansund, where evacuee centers have been established.

Interesting Engineering will be following this story closely. Stay tuned for any updates.

Update: The Norwegian Red Cross is currently treating injured passengers, reporting bruising, broken bones and cuts, after the rescue teams brought in well over 400 people to the harbor.

Using tug boats, it is now reported that the boat is entering the harbor after three of its four engines were restarted. All the people on the boat will be safely rescued.

Passengers from #VikingSky are received by #RødeKors on arrival #Hustadvika evacuation centre. They receive dry clothes, blankets and first aid. We see bruising, broken bones, and cuts. Many need a hand to hold, a shoulder to lean on, someone to talk to. https://t.co/87I9J5L60x pic.twitter.com/fBiob0vyeY

The Ponderosa: A Classic Chevy 1966 Pickup Truck Has Been Revamped and It's Striking