14 Cars With the Best-Sounding Four-Cylinder Engines

The distinctive sound of an engine is like the voice of the vehicle. And I’m not just talking about V8s and V12s. Here are fourteen cars with the best-sounding four-cylinder engines.

Let’s talk about a man’s other best friend, cars. Man’s relationship with the machine has been documented in countless stories. We all have a car story to tell; the adventures that we’ve had together. It all begins with that poster on your bedroom wall. The time you learn to drive to when you buy your first ride, it is indeed a love story. 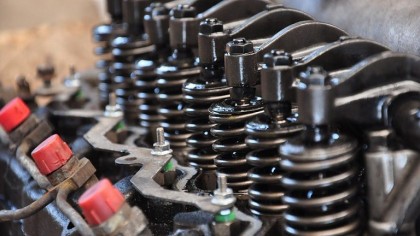 “The time I learned to drive was the first time I felt like a man.”, says my mechanic, “And I knew it was love when I first heard her roar.”

The distinctive sound of an engine is like the voice of the vehicle. And I’m not just talking about V8s and V12s. Here are fourteen cars with four-cylinder engines with sounds that are guaranteed to put a smile on your face and maybe a nostalgic tear.

You know it is engineering done right when an engine has been in production for forty straight years. It has powered countless cars over the years, giving them soul. A design ahead of its time, a sweet voice that has been a lullaby for boys since its introduction in 1954.

Available in a Silver top 20V and later a black top version, the engine makes 165HP at 7600rpm thanks to its cylinder compression and a VVT system. The high-strung, well-built engine revving all the way to redline is a site to be seen, heard and felt.

Any of the Mitsubishi 4G63T

The ‘Sirius’ engine has powered world rally champions and is the most perfect high roader we know. And that iconic sound is not something one can easily forget.

The car that brought the likes of Porche Boxter and Cayman to shame with its irrational and larger to life feel and handling, the Alfa Romeo 4C is one hell of a 4C that really packs a punch. With its signature sound, the nimble classic is known to be a product of soulfulness and passion. The perfect ride for the aptly titled crazy ones.

Fred Offenhauser has his own legacy in engine making. The man behind the “Offy” engines that have become synonymous with Indy Racing created a powerful and reliable companion when he crafted this masterpiece. The engine is a class of its own with a voice that is sure to inspire awe and maybe a little bit of jealousy from your friends.

The best tuneable turbocharged 4C engine by Nissan has a throaty, powerful voice with tons of substance and satisfaction that differentiates it from the herd. Believe it or not, the 2L engine can deliver up to 400HP.

When BMW says that it created the original M3 to define the fine line between a road car and race car, you have no choice but to believe them. The M3 of today is much more powerful and significantly faster, but the E30 was and remains just something else. It had an engine that would rev and rev and rev, and the longer you kept your foot down, the better it sounded.

Despite the reliability issues, the Fiat 500 is one great little city car. The Ford Fiesta ST might be a better all-around car, but the Fiat 500 Abarth has one seductive voice that makes up for the flaws. Some say that it sounds like half a Ferrari or like a Jaguar F-Type R for the masses, but it does sound damn good.

The Honda S800 was Honda's follow-up to the S600 and had a slightly larger engine that made 13 more horsepower and a 10-mph higher top speed. This gave it 70 horsepower and a top speed of 100 mph. Not a big number compared to today’s cars. Then again today’s cars don’t sound like the S800 sounds when it is revved all the way up to its 8000-rpm redline. And there was a racing version as well, that could rev even higher.

The Honda S200 is a car that nearly matched the Mustang GT and managed to do so despite having half the number of cylinders and less than half the displacement. The S2000 was light, balanced, had an amazing manual transmission, and its 2.0-liter engine sounded better than any other four-cylinder at the time.

The successor to the 718, 904 Carrera GTS was the car that allowed the company to break back into sports car racing after withdrawing from Formula One. It had a timeless design and an advanced chassis for the time, but the best thing about it was probably the engine that made 70 horsepower per liter, an amazing figure for the time. All things considered, it is the sound that makes it the classic that it is today. The deep rumble almost hit a groove that one could dance to.

The Ford Focus RS is renowned to deliver steady performance. The 350 horsepower engine that only comes with a six-speed manual transmission puts that power to the ground through a torque-vectoring all-wheel drive system that also has a drift mode. The exhaust, in fact, was designed to eliminate the central muffler which gave it a trademark "angry, raspy, spitting sound that is unique to the RS."

This particular engine has been around for 10 years with a distinctive sound that is its claim to glory. Subaru left the EJ257 largely unchanged in the STI for the last three generations. And yet, when you hear a WRX STI's exhaust note, it has the kind of voice that is going to be remembered for another ten years and more.

Via: Road and Track