14 Inventions by Moms In Honor of Mother's Day

What better way to celebrate Mother's Day than to take a look at some of the inventions created by mothers throughout history?

Mothers are often unsung heroes, and it's no different in the world of engineering and invention. Whether they've been inspired by their roles as mothers, or by an irrepressible desire to change the world around them, we have these women to thank for a number of devices.

At the age of just 21, Martha Coston became a widow, left to support her four children alone. She found notes for a system of maritime flares in her late husband's belongings, but his designs were unfinished and unusable.

Determined to make his designs work, and to support her family, Coston worked tirelessly alongside chemists to create and patent marine signal flares. She received a patent for her creation in 1859, and later that year the technology was acquired by the US Navy.

Melitta Bentz is the reason many of us can enjoy a smooth, filtered coffee at home. Few people know about her, however, or that her invention of paper coffee filters was thanks to her son's homework.

Frustrated by ceramic and metal coffee filtering devices, Bentz poked holes in a brass cup and lined the bottom with paper from her son's school notebook. The simple creation was officially marketed in 1908, and allowed Bentz to create a profitable business which continued to grow throughout her lifetime.

Marion Donovan created a number of useful inventions for infants during her career. One of her first creations was a waterproof, reusable diaper which she created using a shower curtain. Unlike similar products of the time, Donovan's diaper was leak-proof and didn't cause diaper rash.

After the success of this, she began work on disposable paper diapers that would siphon moisture away from the baby to avoid discomfort and rashes. She eventually sold her creation to Victor Mills, the founder of Pampers.

Teacher and mom, Victoria Knight-McDowell, was well aware how easy it is to pick up colds when working with children all day. To keep herself, and others, protected from the spread of illnesses she created Airborne - a herbal remedy which claims to protect against common strains of coughs and colds.

Knight-McDowell has gone on to acquire Pine Bros. LLC, a company known for creating cough drops.

When her son, Zachary, was born prematurely, Dr. Yamile Jackson conceived of a way to keep premature babies comforted while in the NICU. She created the Zaky - a weighted glove that simulates the sensation of being held by a parent.

The glove not only helps comfort the baby, but also aids musculoskeletal development - something which would be delayed otherwise in the absence of touch. Thanks to the Zaky, parents can give their premature babies the support and care they need even when they can't hold them.

Shelly Henry created the Neurolumen to treat her daughter's chronic pain, after a car accident left her with shattered vertebrae. Her search for a method of treating her daughter's pain led her to multi-modal technologies.

The tech consists of laser diodes, light-emitting diodes, and nerve stimulation gel pads. The three-pronged approach of the treatment can effectively reduce or eliminate pain in people suffering from a number of illnesses and ailments. 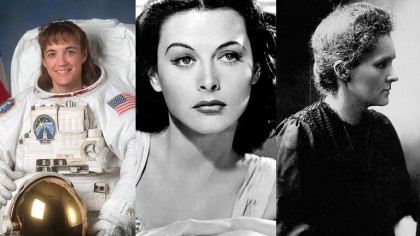 Every Summer parents are reminded not to keep their children in hot, stationary cars for prolonged periods of time. With roughly 40 children in the US dying from heat stroke in cars each year, it's a pressing concern.

General Motors engineer, Tricia Morrow, came up with an innovative solution to this issue in 2016. She was instrumental in creating the Rear Seat Reminder - an alert that keeps parents aware of their children when driving, and to remind them to check on their well-being.

Moms are the masters of fixing problems, so it should come as no surprise that one of the most popular problem-fixing products of all time was created by a mom. Bette Nesmith Graham first created liquid paper when she was working as a secretary.

She would blend water-based paint in her kitchen blender, matching it to the color of her office stationary. Soon other secretaries started asking Graham for their own supply of the life-saving liquid, and in 1956 she founded the Mistake Out company. Her son, Michael, helped her with the home business and she later patented the product under the name "Liquid Paper".

Is there anyone more resourceful than a mom? When Josephine Cochrane wanted a device that could wash dishes faster than her servants could, while still protecting her china, she decided to make one herself.

She created the first dishwasher - a motor-powered, spinning copper boiler that had wire compartments for plates and cups. In 1893 her invention was exhibited at the Chicago World's Fair.

10. Sarah Elizabeth Goode: The Precursor to the Murphy Bed

Sarah Elizabeth Goode was a mother, an inventor, and the first black woman to receive a United States patent. She and her husband owned and operated a furniture store, which was frequented by poor or working-class families who didn't have much space in their homes. Inspired by this, she created a bed that could be folded neatly into a cabinet, for families who lived in small residences.

The patent for Goode's bed was officially awarded in 1885, and was the precursor to the Murphy Bed which was patented five years later.

11. Sarah Boone: The Improved Ironing Board

Mother of eight, Sarah Boone, is best known for designing an ironing board that made the ironing of sleeves and women's clothes easier and less time-consuming. Her design featured a narrow, curved board which allowed for ironing both sides of a sleeve easily.

She received the patent for her invention in 1892, becoming one of the first black women to receive a patent in the US.

Olga D. González-Sanabria has been employed by NASA since 1979, and during her career with them, she has worked on countless significant innovations. Most notable of these, perhaps, is the Long Cycle-Life Nickel-Hydrogen Battery, which has helped to power the International Space Station.

The mom of two has won countless awards for her work in the fields of aerospace and engineering, and is an advocate for underrepresented minorities in STEM.

Sarah Guppy is the woman behind one of Britain's most famous bridges - the Clifton Suspension Bridge in Bristol, England. The mother of six filed her patent for suspension bridge foundations in 1811, and offered the use of her patents and consultation on the construction of bridges to many friends and architects.

She rarely took credit for her work, claiming that she didn't want to appear "boastful". Boastful or not, Guppy and her family filed 10 patents in the first half of the 19th Century, making her the figurehead of one of the most impressively inventive families of the era.

When Mandy Haberman's daughter was born with Stickler Syndrome, a condition which affects facial structure, she had to think of a new way to feed her. The infant was unable to breastfeed or drink from a conventional bottle, so Haberman created the Haberman Feeder - a specially-designed bottle that can be used to feed babies with cleft palates, genetic disorders, neurological disorders, and more.

Since then she has created a number of other inventions for babies, helping other parents overcome obstacles in feeding their infants in their earliest months.