15 Amazing MIT Student Projects of the Past 10 Years

These incredible projects showcase the level of talent and ingenuity at the prestigious Massachusetts Institute of Technology.

Few institutions carry as much esteem as MIT. The prestigious school has long been a hub of innovation and ingenuity across multiple industries and disciplines. Every year, the school's best and brightest debut projects that push the boundaries of science and technology.

From vehicles and furniture, to exciting new breakthroughs in the generation of electricity, the school's projects have tackled an impressive variety of subjects. Here are just some of the most note-worthy MIT projects from the past decade.

1. Martian Cities: Imagining the Colonies of the Future

Last year, a group of MIT students won the annual Mars City Designs competition for their vision of an inhabitable Martian cityscape. The project, entitled Redwood Forest, featured a series of domes connected by tunnels.

Each dome was home to lush forests, and the entire city could support up to 10,000 lives. The team was keen to use every facet of Mars to their advantage, creating a symbiotic relationship between the planet and the new structures. For example, the design heavily featured solar power for use in both powering the city and in the creation of hydrogen fuels.

LEGO isn't just for kids. In February of this year, researchers at MIT used the famous plastic bricks to build a miniature lab which they then used for experiments in microfluidics.

According to the researchers, the uniform design and dimensions of the LEGO bricks lent themselves perfectly to the precision required for the experiment. Because the requisite equipment required for experiments in microfluidics is often difficult and time-consuming to create, this project opened the door to a more accessible method of study.

Four years ago, researchers at MIT created a new smart surface, which had the ability to morph in order to reduce drag. The material responded to external pressure, dimpling like a golf ball in order to increase the object's aerodynamics.

Not only could the material be used in vehicles, but also in the construction of buildings in areas susceptible to high winds. This would allow the buildings to withstand harsh weather conditions, resulting in less damage.

It's not uncommon for major manufacturers and corporations to team up with MIT researchers when working on a particularly taxing project. 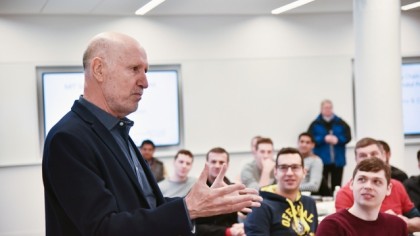 In this instance, BMW approached the prestigious institution to collaborate on 3D printed inflatable materials that could someday be used in soft-bodied cars.

The fascinating material is apparently adaptive, inflating and deflating as needed. This is thanks to MIT's Self-Assembly Lab's process of liquid printed pneumatics, which utilizes air chambers to inflate and deflate the material.

BMW hopes to someday use the material in both the interior and exterior of vehicles, and believes the technology is at the forefront of the future of automobiles.

Back in 2014, researchers in MIT's Media Lab created CityHome - an interactive and innovative living system that allowed people to get the most out of their small living spaces.  CityHome's project, the RoboWall, was a robotic block measuring 182 square feet (16.9 sqm), which was voice, touch, and gesture-controlled.

RoboWall contained every conceivable household necessity, from a bed and fully-functional kitchen, to an office space. All these features could be folded away at will, allowing one room to function as either a bedroom, dining room, kitchen or more, depending on the user's needs at any given time.

Another recent and high-profile collaboration between MIT students and a car manufacturer is their work on the Lamborghini Terzo Millennio. The so-called electric "supercar" stands apart from other electric vehicles, as it doesn't have a battery.

The ambitious project uses supercapacitor technology built into the body of the car as a method of storing energy. The carbon nanotubes of the car's body can also self-heal, mending fractures and other imperfections without the need for human maintenance.

At the beginning of this year, MIT researchers struck upon a new method of generating thermal electricity that could increase the energy output threefold. They achieved this through an innovative use of topological materials as thermoelectric semiconductors.

Their results were based on the movement of electrons from high to low temperatures, and the topological materials they used (in this instance, tin telluride) provided the smallest and most effective distance through which electrons could move, resulting in a higher energy yield. This was because the electrons had a lower chance of scattering.

Back in 2016, MIT students teamed up with Microsoft to create gold leaf "tattoos" that could control smart devices. The tattoos functioned as circuit touchpads, and when touched can communicate with the wearer's smartphone.

The project, entitled DuoSkin, could potentially allow for the extraction and monitoring of health-related data. Since the creation of DuoSkin, many similar projects have surfaced across the globe, further suggesting that wearable health monitors and smart skin technology could be the way forward.

Graphene is a pure carbon material, often referred to as the strongest material in the world. Last year, MIT researchers were successful in making graphene stronger than ever before, creating a material that was stronger than steel while remaining a fraction of its density.

Until MIT's breakthrough, graphene was only available as a strong material in a 2-dimensional form. Their research allowed for the development of 3D graphene structures, by compressing and fusing the material into an even stronger form.

Many projects that had their beginnings in MIT have gone on to become successful start-ups. One example of this is Portal Instruments, and their needle-free injector technology, PRIME.

PRIME was created by a student-professor team in MIT, and delivers medication through the skin by using a high-pressure jet of liquid. The medication is simply loaded into the applicator, and then administered at a speed of up to Mach 0.7.

Many people are wary of robots, and even fear them. To combat the negative perception of robots, MIT students created a polite, socially aware robot that prioritized human interactions and could easily navigate a world full of people.

The adorable machine can navigate its way around busy areas, avoiding collisions with pedestrians and observing human social rules and expectations. Best of all, the project was achieved using store-bought sensors and webcams, and using open-source code. This means, theoretically, you could build your own polite robot at home.

Working in collaboration with the United States Air Force, researchers at MIT developed a rocket drone capable of reaching top speeds of Mach 0.8. The Firefly was first unveiled in November of last year, and was created by the university's aerospace program, AeroAstro.

The lightweight drone can fly at rocket-speeds for up to three minutes, and is built from 3D printed titanium. The purpose of the drone is data collection, and it can be easily deployed from a fighter jet.

13. Nanofibers Stronger Than Kevlar: Crafting the Next Generation of Fibers

In January of this year, MIT researchers were successful in creating nanofibers that are stronger than Kevlar. The super-strong fibers were created through a process of gel electrospinning, crafting polyethylene fibers into incredibly durable nanofibers.

In terms of strength, the fibers are comparable to carbon fibers, while maintaining a much lower density. Because of its combined strength and lightweight state, researchers believe that the material could have a variety of uses across many different technological fields.

14. The MindRider: Visualizing Your Emotional State

First developed in 2011 by students in MIT'S Media Lab, the MindRider is a wearable technology that measures electroencephalogram feedback from the brain, and uses it to create a visual representation of the wearer's emotional state. The project utilized this technology in a bicycle helmet, and has since launched a successful start-up for the product.

The original project used colored lights to translate the electroencephalogram information into a visual display. Green lights indicated that the wearer was focused, whereas red lights indicated anxiety, drowsiness, or other inappropriate states for the operation of a vehicle.

Also in 2011, MIT researchers created an innovative imaging system that could track light at an astounding trillion exposures per second. The system used a streak camera, whose aperture is a narrow slit which allows for super fast exposures.

The system was developed in order to be used in experiments where the tracking of light emission from chemical samples was necessary. It marked a major breakthrough in visual technologies, and one that had a broad range of applications across other sciences.