15 Awesome Kickstarter Products That Went Viral for a Good Reason

Take a look at some of the amazing gadgets that launched some of the most popular Kickstarter campaigns.

Crowd-funding has been a massive boon to everything from the arts to technology. 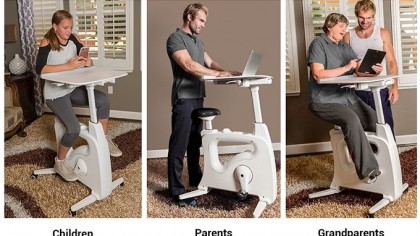 This New Kickstarter Project Lets You Exercise without Leaving Your Desk

The ability to pitch and fund projects easily and effectively online have changed the way we make products forever. Platforms like Kickstarter have become invaluable to inventors and innovators looking to launch their genius gadgets.

Of course, some campaigns are more successful than others. Here are some of the Kickstarter campaigns that went completely viral, and resulted in some of the platform's biggest success stories.

There's nothing like grilling and chilling outdoors during the summer. While your run-of-the-mill cooler might be good for keeping your drinks cold, there are a lot of ways it could be improved. That's what the Coolest Cooler is aimed to achieve.

The Coolest Cooler became one of the most-funded projects in Kickstarter history, earning over $13 million to bring the project to fruition. The so-called 21st-century cooler features a built-in blender for making smoothies and blended ice cocktails, a Bluetooth speaker, and a USB charger for smartphones. It runs on a rechargeable battery and is the perfect accompaniment for days out at the beach.

2. The 3Doodler: Bringing 3D Printing to the Masses

3D printing is one of the coolest innovations of recent years, but the technology can be prohibitively expensive for everyday use. That's why the 3Doodler was such an exciting gadget. The easy-to-use pen allowed people to experience the fun and creativity of 3D printing in a cost-effective, accessible way.

The viral product attracted over 26,000 backers to its campaign, ultimately raising $2.3 million. The pen extrudes heated plastic, which cools quickly to form 3D sculptures. You can even download stencils that will help you create more intricate designs.

The BauBax travel jacket is often referred to as the world's best travel jacket, and it's easy to see why. The innovative design features everything from a built-in phone charger, to a neck pillow, to gloves and an eye mask. No matter what the weather, or where you are, you can get comfortable and rest up with the BauBax jacket.

It is thanks to this fantastic, all-in-one design that BauBax raised over $9 million, attracting 44,949 backers to invest in the product. Today it remains one of the most successful items of apparel to be funded on Kickstarter.

Pebble smartwatches had one of the most incredible success stories in Kickstarter history. As one of the first ever consumer smart watches, Pebble not only easily broke through all their funding goals, but was eventually purchased by FitBit.

The Pebble 2, the second iteration of the popular smartwatch, raised over $12 million on Kickstarter. Today, the watches maintain a dedicated fan base, thanks to their design and ease of use.

OUYA was an ambitious project, to say the least. The product was an Android-based game console that sought to attract the collaboration of game developers who felt alienated by the mobile gaming market. It sold itself as a console made with the freedom of developers in mind.

It was a sales pitch that worked, and then some. The OUYA raised a total of $8.5 million, far surpassing their $950,000 goal. While the subsequent success of the console is debatable, it certainly paved the way for future independent console creators.

6. Pono Music: Playing Music Like You've Never Heard it Before

Pono Music had an angle that many independent projects can only dream of - celebrity endorsement. The product was created in collaboration with legendary musician, Neil Young, and aimed to create a new platform for listening to music that better maintained the fidelity of studio recordings.

Though Pono's funding goal was set at a humble $800,000, it ultimately earned over $6 million, becoming one of Kickstarter's most popular projects. It marked a great moment not only for crowd-funded tech, but also for the development of digital music.

Virtual Reality has quickly become big business. Like 3D printing, a lot of VR tech can be too expensive for the average tech consumer, but luckily there are plenty of companies looking to change that. Among them is Pimax, whose 8k VR headset sought to become one of the most affordable commercial VR headsets on the market.

Pimax smashed their $200,000 goal, earning an incredible $4.2 million. Its lightweight design eliminates motion-sickness and other complaints that are common with VR headsets. The first completed headsets were sent out earlier this year, to mostly positive reviews.

8. Amabrush: Brushing Your Teeth in No Time

Amabrush pitched itself as the first automatic toothbrush, which claimed to clean teeth in an incredible 10 seconds. The unusual design featured a bristled mouthpiece, which vibrates to clean your teeth quickly and effectively. The unusual toothbrush received a lot of attention in online media, which no doubt helped its successful funding.

Though its goal was set at $50,000, Amabrush successfully raised over $3 million, and is one of the most popular hygiene products to have ever been funded on Kickstarter.

9. The Micro 3D Printer: 3D Printing for Everyone

If you want something a bit more high-tech than the 3Doodler, but are still on a budget, then look no further than the Micro. The Micro pitched itself as the "first truly consumer 3D printer", and prioritized cost-effectiveness and ease of use in its design.

The small printer is ready to use right out of the box, and has a variety of options when it comes to filament spools and supporting software. The Micro raised a whopping $3.4 million, easily surpassing its $50,000 goal, and is still among the most-funded projects in the history of Kickstarter.

Home security is important, and when investing in home security technology your peace of mind is priority. That's why the EverCam eufyCam pitched itself on the basis of its year-long battery charge, as well as its wireless technology. Meaning it can help keep your home safe, with minimum maintenance.

The camera features facial-recognition technology, as well as night vision and full HD. It raised over $3 million in its Kickstarter campaign, and remains one of the most popular and viral security products to have been launched on the site.

11. Oculus Rift: Bringing You Into the Game

The Oculus Rift is, perhaps, one of the most famous products to have gotten its start on Kickstarter. The now well-known VR headset has since been bought by Facebook, and remains one of the most recognizable virtual reality technologies.

The buzz around Oculus began with their Kickstarter campaign, which raised $2.4 million. It was one of the first major successes on Kickstarter, and launched the development of VR technologies into the mainstream.

There's no doubt that 3D printing is a hot commodity. Some of Kickstarter's most successful campaigns feature 3D printing in some capacity. While we've already covered standard 3D printers, and 3D printing pens, OLO brings something new to the table in the form of the first smartphone 3D printer.

OLO officially debuted in 2015, showcasing its ability to work with any mobile OS to print 3D objects. Simply select the object you want to print, place OLO over your phone, and it does the rest. The innovative device raised $2.3 million on Kickstarter, and helped pave the way for accessible 3D printing tech.

13. ZUNGLE: Listening to Music Through Your Glasses

ZUNGLE went viral for a variety of reasons. For starters, they're a stylish brand of sunglasses. But that's not where the appeal ends. ZUNGLE also uses bone conductive speakers built within the glasses, to allow you to listen to your favorite music.

The bone conductive speakers create vibrations against the wearer's skull, which translate as sound waves in the ear. The glasses are also bluetooth-enabled. This way you don't need to wear headphones to listen to music or take phone calls. The incredible glasses raised $1.9 million on Kickstarter, thanks to their unusual and innovative design.

14. DUO Dual-Screen Monitor: Taking the Hassle Out of Switching Screens

Using more than one monitor can greatly improve your ability to work, but this isn't always an option - especially when you're on the go. That's why DUO created a mobile screen that can slide out from behind your laptop screen, to enable dual-screen working.

While their Kickstarter campaign is still ongoing, DUO reached their target in just 4 hours. At the time of writing, they've raised almost six times their goal of €30,000. DUO connects to your laptop via magnetic adhesives, and is plugged in via USB. All you have to do is slide it out, and start working effortlessly with dual-screen display.

15. Scribit: Drawing on the Walls With Robots

There's a new, fun way to decorate your walls thanks to Scribit. Scribit is a robot that can write and erase on any vertical surface, and is compatible with both iOS and Android. It can draw using up to four markers at a time, all of which can be swapped out to create different color combinations.

Scribit debuted at this year's Milan Design Week, and it has already beaten its Kickstarter goal of €42,857, earning over €600,000. The campaign is still on-going, with Scribit listed among the current most popular campaigns on Kickstarter.