Take a look at some of the incredible biometric technologies poised to change the health industry in the very near future.

Medical technology is progressing in leaps and bounds, thanks to the introduction of biometrics. Sophisticated biometric sensors have the potential to monitor our daily health, as well as detect diseases in their earliest stages.

Here are just some incredible breakthroughs in biometric technology that could soon change the face of health industry, and how we record our own medical data.

One of the most exciting technologies to watch right now was unveiled in early 2017 by researchers from MIT and Brigham and Women's Hospital. They created a voltaic cell which is powered by a patient's stomach acid, and which can have a variety of applications.

The cell contains zinc and copper electrodes, and ions can be carried between these electrodes by the stomach acid. This powers the circuit, in turn, powering a temperature sensor and wireless transmitter. This means that a pill containing the cell could be used to detect changes within the body, and wirelessly transmit its findings to computers and/or smart devices.

2. Color-changing Tattoos: Indicating When Your Health Is At Risk

Another 2017 innovation hailing from MIT and Harvard Medical School was a color-changing ink with biosensing properties, which could be used in health-monitoring tattoos. The smart tattoos could allow people to monitor their glucose and sodium levels.

The project, called DermalAbyss, operates by responding to changes in our interstitial fluid. This fluid is where our skin cells are suspended, and contains information about our body's fluctuating chemical levels.

The ink shifts between blue and brown to indicate changes in glucose levels, and the sodium-monitoring ink varies in brightness under a blacklight. The breakthrough technology could be hugely valuable for diabetes patients looking to monitor their blood-sugar levels.

In theory, the inks could even be used to monitor and detect other changes in our blood chemistry.

Earlier this year, Fitbit invested $6 million in Sano - a company manufacturing glucose-monitoring sensors and a corresponding app. This is a strong indicator that companies like Fitbit are looking to lead the way in wearable health technologies in the near future.

The Sano sensor is housed within a wearable patch, which wirelessly communicates with the company's smartphone app. In addition to monitoring glucose levels, the app can also recommend dietary changes and exercises to aid the wearer's health.

Last year saw the debut of Medtronic's Artificial Pancreas, a biometric device that measures glucose levels in the blood and administers insulin as needed. To date, it is the only FDA-approved automatic insulin pump.

It features a glucose sensor, an insulin pump, and infusion patch which delivers the insulin via a catheter. The sensor gathers information on the wearer's glucose levels, and the delivery of background insulin is adjusted accordingly.

Patients have the option to set the limit of their insulin intake and have the device automatically switch to sleep mode either upon reaching this limit or just before.

Unveiled in September 2017, the MasSpec pen is a handheld device that can detect cancer cells in roughly ten seconds. It was designed for use in surgery so that the surgeons can remove only cancer-afflicted areas and spare unaffected tissues.

The MasSpec is faster than most cancer screening tests and boasts an accuracy rate of 96%. It works by examining the metabolites of the cells, which can detect cancer at a molecular level. It can do so without causing any pain to a patient, as it operates by merely administering a drop of water to the tissue and examining the molecules that migrate from the tissue to the water.

Researchers in Melbourne, Australia's RMIT University revealed their work on ingestible sensors earlier this year. The sensors pass through the digestive tract, gathering and transmitting information on the gas concentrations inside us and our overall gut health. 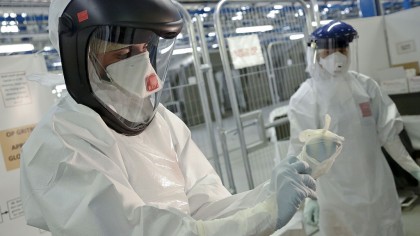 The fascinating little sensors could not only be used to determine food intolerances but also as an early detector of colon cancer. The tech features separate sensors for the measuring of oxygen, carbon dioxide, and hydrogen, and allows for the data to be transmitted and viewed on a computer.

7. Smart Skin: Displaying Your Vitals on Your Body

The past few years have seen plenty of advancements in biometric wearables and so-called smart skins. Most recently, researchers at the University of Tokyo debuted a smart skin overlay that could not only measure vitals but display them on the body.

Using semiconductor technology the electric skin can track the wearer's heart rate, blood pressure, temperature and more. Wearers can even have their vitals wirelessly transmitted to the cloud, or directly to their doctor's computer.

This would allow doctors to remotely monitor the health of their patients, something which is especially useful in the case of elderly patients or others who require a greater amount of care.

Since 2016, IBM has been working on lab-on-a-chip technology, that could detect a host of different diseases quickly and effectively. The chips examine nanoparticles in the body to detect cancers and other illnesses, and could someday replace more invasive procedures like biopsies.

When screening for cancer, the chips collect exosomes - tiny particles that come from cells and contain information on the cells they originated from. The chips can detect information that can usually only be observed through an electron microscope, effectively negating the need for sample-taking.

Once fitted with a chip, a doctor can access the information directly from the patient.

Researchers from the US, China, and South Korea recently unveiled new, wearable sensors that can remotely track patients' temperature and blood pressure. The penny-sized sensors collect data from the patient and transmit it to a medical professional.

They are intended to be worn in sets of up to 65, spread across different areas of the patient's body. The collected information is stored by an NFC transmitting coil before being sent to the medical professional.

Though at present the sensors are only capable of monitoring pressure and temperature, the research team wants to expand the capabilities to include heart rate and breathing.

In March of this year, researchers from Tufts University developed sensors that can be worn on your tooth and can track your dietary information in real time. The tiny sensors can track everything from alcohol consumption to levels of sodium and glucose.

The sensors comprise of three layers - a central layer which registers the chemical compounds of the foods it comes in contact with, and two outer layers which transmit the data. The sensors could allow wearers to accurately track their consumption of different chemicals, and also give doctors and dentists an accurate overview of their patients' dietary habits.

This new CRISPR tech could allow users to diagnose themselves, no matter where they are. The Mammoth CRISPR Platform consists of a small card, which contains CRISPR proteins. When the user's bodily fluids come into contact with the proteins, they immediately begin to seek out disease DNA and infections.

With the corresponding app, users can send their data to Mammoth Biosciences and receive a full diagnosis and suggested treatments within 30 minutes. This is a huge breakthrough in the early detection of illnesses, and also gives users the opportunity to screen themselves for diseases quickly and easily without a doctor's appointment.

In November of last year, the FDA officially approved a sensor pill that alerted doctors when it had been successfully ingested by a patient. The drug, Abilify MyCite, is an anti-psychotic and could help psychiatric medical professionals ensure that their patients are staying medicated.

After receiving consent from the patient, the doctor can prescribe the smart pills. The tech involved features three key components. First, the pill itself is fitted with an internal sensor that responds to the contact with stomach acid. Once the sensor is activated, it communicates with a patch worn by the patient. From there, the signal is sent to the smart device of the prescribing health professional to alert them that the medication has been ingested.

Though IBM is hard at work on lab-on-a-chip technologies, some scientists are taking it a step further. Lab-on-a-fiber technology operates with fiber optics, and are better suited to wet environments within the body than chips.

Because of their small size, the fibers can be implanted directly into a patient's organs or veins to be used as biosensors. Much like lab-on-a-chip technologies, these fibers are capable of collecting and screening exosomes in order to detect and diagnose diseases in their early stages.

They also use light, as opposed to electrical currents, to conduct their readings which have been suggested to pose fewer risks to the patient's body.

Last year's winner of the James Dyson Award was sKan - a handheld device that can detect skin cancer. Created by a team of engineers from Canada's McMaster University, the device is less costly and invasive than traditional skin cancer screening methods like biopsies.

It uses heat-sensitive resistors to map the body, and then generate a digital reading that can determine whether or not there is any trace of cancer. This technology could soon allow doctors to diagnose patients quickly and effectively, for a fraction of the current cost.

In 2016, researchers from Brazil's National Nanotechnology Laboratory unveiled a cancer-detecting nanoscale biosensor. The device could allow for the early detection of cancer, as well as Alzheimer's and Parkinson's disease.

The sensor comprises an organic transistor which reacts to the enzymes found in many forms of cancer and other diseases. Not only would the sensor allow for early detection and diagnosis, but it can also be used to monitor the effectiveness of treatment following diagnosis.

The World's Most Unique and Awe-Inspiring Airports