15 Interesting Green Roofs From Around the World

Green roofs benefit not only the buildings they sit upon but also lower temperature levels in cities and create soothing visuals for city-dwellers.

Green roofs, walls, and vertical gardens provide crowded cities with green areas, spaces for recreation and assist in the reduction of the greenhouse island effect. Research shows that green roofs and walls can drop the temperature of cities by 1-2 degrees Celsius.

These wonderful roofs and walls also benefit the interior of buildings. A well designed and maintained green roof can lower the inside temperature of a building by up to 1-degree and offset the cost of heating and cooling.

In addition to being a smart economic choice, green walls provide high levels of psychological value to city dwellers. Being either visually or physically close to green areas has a calming effect on many people.

Green roofs also absorb rainwater and provide much-needed habitats for urban dwelling animals. The benefits of green walls are endless and the idea isn’t new. Evidence of green roofs goes back centuries as a way of keeping buildings warm in winter and cool in summer.

We have collected 15 astonishing green roofs to show them off at every scale and purpose.

The Nanyang Technological University hosts one of the most iconic lawned grass roofs in the world. The building of the School of Art Design and Media features two swooping roofs that slope to an impressive 45-degree angle.

Each roof is covered in lawn which not only contributes to the buildings' low energy use but provides an outdoor communal space. The green roof is composed of a combination of two kinds of grass, Zoysia matrella, and Ophiopogon.

Under this grass is four layers of substrate. Volcanic rocks and pumice provide depth while a layer of washed sand locks in the root system of the grass. The roof has a moisture retention mat. The grass is watered via an automatic sprinkler system that uses harvested rainwater.

This green roof consists of 100,000-square meters of greenery stepped over 15 terraces that form the roof of the ACROS Fukuoka Prefectural International Hall. The impressive park was designed by renowned green architect Emilio Ambasz in 1995.

Controversially the government-owned building was proposed to be built on Fukuoka City's last remaining green site. Argentinian Ambasz was able to secure the contract for the design of the building by demonstrating he could provide both a park and a building.

The building and its greenery is still a leader in demonstrating the way green roofs can be used to both increases the economic viability of buildings by reducing heating and cooling costs as well providing necessary green space in dense urban environments.

The stepped roof of the building provides a usable public space that is no different than a traditional park in the same location.

The green roof on the City Hall in Chicago started as a way to demonstrate the positive effects green roofs can have on reducing the greenhouse island effect in cities. To lead the way, City Hall planted more than 20,000 plants from over 150 species in a 3,530-meter space. 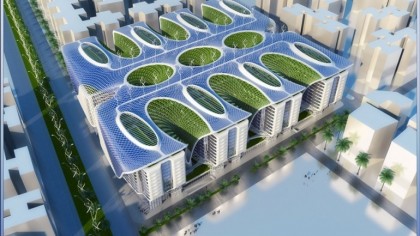 What is most impressive about this roof garden is that the plants are able to thrive in Chicago’s crazy weather conditions. The city experiences extreme temperature changes from snowy winters to humid summers.

The plants chosen for the rooftop are endemic to the area, meaning they have already adapted to survive in the local climate. Another unusual aspect of the green roof is that it was added to the building after completion. The roof garden has a very slim and lightweight profile as not to overload the existing building's structure.

This incredible living roof is home to more than 400,000 native plants and four colonies of 60,000 bees. Other wildlife such as birds and insects have also taken up residence in the human free-zone increasing the biodiversity of the region.

The building's sloping roofs provide natural drainage for the plants, essential in a region that experiences high rainfall. The roof is one key to the building becoming the world's first LEED® Platinum certified convention center.

The impressive center and its green roof were designed by a collaborative team led by Seattle based architecture firm LMN.

When Studio Marco Vermeulen was tasked with renovating the Biesbosch Museum in De Hilweg, The Netherlands, they needed to find a way to marry the old building with the newly designed wing.

Part of their solution was to surround the buildings with earthworks covered with a roof of grass and herbs.

This new folded landscape responds to the hexagon shapes of the building and creates a new landscape for both animals, plants, and humans.

The site is an environmentally sensitive water park and care needed to be taken to add the new buildings in a way that complemented and enhanced the existing natural environment.

This green roof plays a critical role in researching which plants are suitable for life up high. The center was completed in 2009 and is divided into two research sections.

Native plants in one area and then all other species in another, they are monitored for their resilience to the harsh conditions of living and thriving on a rooftop.

The roof is accessible to the public to learn more about the wonders of green roofs and local plants.

The Moesgaard Museum in Hojbjerg, Denmark blends seamlessly with its surrounds. The art and culture center looks likes it was literally lifted out of the ground.

Its flat angled grassed roof is a seamless continuum of the park area behind it. This grassed roof provides a dynamic site for recreation and play. The building is made from simple and honestly exposed materials such as concrete and timber.

The building was created to adhere strictly to the principles of Henning Larsen Architects which relate to creating value at three levels of sustainability—the economic, social and environmental.

8. The Solaire, NYC is the first green residential building in the U.S

The Solaire prides itself on its reputation of both luxury and environmental sensitivity. The apartment building in New York is LEED Platinum EB Certified and is made up of studio to three-bedroom homes that overlook Battery Park.

The Solaire's residents enjoy naturally lit rooms and water that is collected and filtered on site.

The rooftop gardens were designed by Rafael Pelli and landscape architect Diana Balmori. The gardens provide a green oasis in a sea of concrete.

The California Academy of Sciences was designed by Renzo Piano in 2008. The building is formed around a central courtyard and on its roof sits a 37000 sq m. park.

This green roof mimics a natural landscape with flat and undulating areas combined. More than 1,700,000 indigenous plants have made the roof their home, living in specially designed coconut fiber planting containers.

The roof also has glass skylights that provide light and ventilation into the main two exhibition halls.

This wild mixed-use building complex was built as a labor of love from 1969 to 1975. It contains residential accommodation, offices, and stores which are mixed on different levels.

Green spaces and grassed parks are fitted between this jumble of uses. The whole building is a complex visual composition of oblique angles, levels, and greenery.

The aim of the proposal was to reduce the visual heaviness of its predominant building material, concrete, there is no doubt this goal was spectacularly achieved.

11. Ride up to your apartment at the 8 House in Copenhagen

8 House is an ambitious residential project designed by Bjarke Ingels on the outskirts of Copenhagen. At the time of its construction, it was the largest private development ever undertaken in Denmark.

The stacked and angled design shape of the building allows for a continuous cycling and bike path from the ground level to the 10th floor.

On two sloping sides of the building, 1,700 sq m. of grass reduces the urban heat island effect of the area as well as giving the building a unique visual identity.

The grassed green roofs also act as a type of camouflage for the building when viewed from the farmland area to the building's south.

12. The Frankfurt International Airport has been adding green roofs since 1990

Frankfurt Airport has been adding green roofs to buildings since 1990. The busy airport has more than 40,000 m2 of green roof space dotted across smaller sections of buildings.

Some of this is visible to passengers inside the airport's building, others are on roofs with no visual access. The airport is dedicated to maintaining its green roofs to both reduce the indoor and local area temperature.

The green roofs also double the life expectancy of the building's roofing materials. All the green roofs are maintained using by a team of dedicated technicians who maintain a greenhouse for growing new plants on site.

The Javits Center is the busiest convention center in the United States. From street level, it looks like any other large commercial property, but the center holds a secret on its roof.

The building hosts 6.75 acres of green space that reduces the building’s energy consumption by 26% and absorbs 6.8 million gallons of rainwater. This rainwater absorption goes a long way to reducing flooding on the West side of Manhattan.

Importantly, in a city with minimal green space, the center's green roof also provides a home to more than a dozen different bird species.

14. The ASLA Headquarters sets the standard

The American Society for Landscape Architecture sets a good example for both its member and its potential clients by having a wonderful example of a small green roof on the top of its headquarters in Washington DC. The space is both an experiment for the Society to test out theories about green roofs as well as a green oasis for the building inhabitants.

Since the roof's installation, it has contributed to a 10 percent decrease in building energy use over the winter months. As well as dropping the temperature inside, the roof has shown to be as much as 59 degrees cooler than conventional roofs on neighboring buildings.

Washington, D.C. can experience high rainfall and the ASLA rooftop garden has shown it is saving huge amount so water from entering the overburdened stormwater system.

In just a 10–month monitoring period, the green roof prevented 27,500 gallons of stormwater from going to stormwater runoff.

15. The Vulcano Buono Italy is right at home near real volcanos

The commercial center's roof is covered with a green layer that contains over 2,500 plants. This green carpet disguises the building's large form and allows it to fit seamlessly with the surrounding landscape.