15 of The Best Science Museums In The World

From the Natural History Museum in London to the Miraikan in Tokyo, these are 15 of the best science museums in the world.

Museums are cathedrals to science and understanding, but not all science museums are equal. Some simply excel in grandeur and the quality of their exhibits and exhibitions.

The following 15 prime examples are all well worth visiting if you happen to be in the vicinity in the future. This list is far from exhaustive and is no particular order.

1. The Natural History Museum in London is fantastic

The author might be a little biased, but The Natural History Museum in London is one of the best science museums in the world. It is also one of the oldest and most famous museums around.

Featuring awe-inspiring exhibits all wrapped up in a masterpiece of architectural design, this museum is a must visit for anyone who travels to London. As the name suggests the main theme of the museum is natural history and it features collections about animals, plants, human biology, minerals, and natural resources.

But, in the author's opinion, the recent replacement of "Dippy" the Diplodocus with a Blue Whale skeleton does dampen the museum's "magic".

It first opened in 1881 and receives around 5 million visitors a year. Make sure you are one them next time.

2. The Exploratorium in San Francisco is fun and educational

The Exploratorium in San Francisco is full of engaging and educational exhibits. It truly lives up to its nickname "The Scientific Fun House" and offers a very different museum visiting experience.

The design team who built it challenged themselves to create a space to display the strangest, most amazing and most exciting aspects of science possible to amaze and enthuse young minds.

Its main mission is to create young scientists by letting them see just how exciting science can be. "Our vision is a world where people think for themselves and can confidently ask questions, question answers, and understand the world around them."

3. The Swiss Museum of Transport in Switzerland is all about getting around

The Swiss Museum of Transport (Verkehrshaus der Schweiz) is located in Lucerne in Switzerland and is crammed with different modes of transport. Most of the exhibits are Swiss car models from the early 1900s onwards but it also includes planes, trains, shops, and some communication technology.

The museum opened in 1959 and quickly became Switzerland's most popular museum. But it's not all about science and technology - there is also a large collection of the works of Hans Erni, a well respected local artist.

There are several other attractions in the museum beside the collection, including a planetarium, a large-format cinema and a 1:20,000 scale aerial photograph of Switzerland.

4. The National Air and Space Museum in Washington D.C. is full of planes

Exhibits within the museum take you on a visual feast of a tour. From the first attempt to fly right through to the incredible achievements of the ventures into space.

If you love science and technology, especially aviation, this is a must visit for you and your family. You are in for a real treat - lucky you.

Te Papa Museum in Wellington is New Zealand's national museum. Te Papa roughly translates to "Our Place" from Maori, and the museum opened its doors in 1998 after merging with the National Museum and National Art Gallery.

Its exhibits are not exclusively scientific in nature, but it does have large collections of fossils, archaeozoology, plant specimens, bird specimens as well as a wide array of amphibians, reptiles, and mammals. It otherwise has exhibits on the Arts, History, Taonga Māori and Pacific Cultures.

Its most famous exhibit is its enormous 495 kg colossal squid specimen. Sadly, this is currently on display, but is set to return in 2019.

6. The Universeum in Sweden is great for families

The Universeum in Gothenburg, Sweden is a perfect day out for all the family. It prides itself in being tailored for children, that include exhibitions, interactive displays, and an aquarium.

There is even a three-story "rainforest" with its own horde of little inhabitants. Whilst the fun is mostly geared towards kids, there are plenty of displays which will keep the adults interested as well.

As their website proudly boasts "Universeum is a place where play leads to knowledge. Here animals and nature mix with new technology and exciting experiments. Go on a rainforest safari, dive into the depths in the Ocean Zone or challenge your body and mind in Health. A visit to Universeum is an unforgettable adventure."

7. The City of Science and Industry in Paris is the biggest in Europe

The City of Science and Industry [Museum] in Paris, France is said to be the biggest science museum in Europe. In 2016, it celebrated its 30th anniversary and is built on the reclaimed site of Napoleon's slaughterhouse precinct of the city.

It has a wide range of fascinating exhibitions covering exploration, medicine, space, botany, and industry. There is also an impressive planetarium, a submarine, IMAX theatre (La Géode), and child's playground.

It receives an estimated 5 million visitors a year and is one of Paris' most popular attractions. The museum's mission is to spread scientific and technical knowledge among the public, particularly for youth, and to promote public interest in science, research and industry.

8. The Deutsches Museum in Germany is huge

The Deutsches Museum in Germany is the world's largest science and technology museum in the world. The entire museum is also built on its own island on the river Isar and it is a sight to be seen.

It holds over 28,000 objects from 50 fields of science and technology. Although all of the exhibits are worth seeing, one of the highlights is the reconstruction of the Cave of Altamira in Spain.

This is where some of the world's oldest cave paintings ever were first discovered. A truly unique and visually stunning visitor experience.

9. The Science Museum in London is over 160 years old

The Science Museum in London recently celebrated its 160th anniversary in 2017. It contains a fantastic collection of relics from the Industrial Revolution including, none other than, George Stephensen's Rocket.

One of its more recent exhibits is it very popular "Robots" exhibition that charts the 500 years, or so, the evolution of the robot. It also has exhibitions on the history of mathematics and an interesting bit about the statistical work of Florence Nightingale.

It attracts 3.3 million visitors a year and is free to the public. Some temporary exhibitions may charge for entry, however.

10. The Shanghai Science and Technology Museum in China is impressive

The Shanghai Science and Technology Museum in China is enormous with 13 permanent exhibitions ranging from the "World of Robots" to the "Children's Rainbow Land".

It has four giant science theatres, two of which are IMAX, and some China-specific exhibitions like its "Spectrum of Life" display on the biodiversity of the Yunnan province.

It first opened in 2001, with its final phase of construction completed in 2010, and has become one of the city's most visited attractions.

The museum is dedicated to the popularization of science, with an intended theme of the harmony of "Nature, Mankind, and Technology".

11. The Academy of Natural Sciences in Philadelphia is one of the oldest

The Academy of Natural Sciences in Philadelphia founded in 1812 and forms part of Drexel University. This makes the museum the oldest museum of natural sciences in America's.

It contains collections of over 17 million specimens including an incredibly impressive 13m tall complete T-Rex skeleton to greet you as you enter.

According to their website, "Academy of Natural Sciences of Drexel University is a leading natural history museum dedicated to advancing research, education, and public engagement in biodiversity and environmental science."

12. Ontario Science Centre in Toronto is full of interactive exhibits

Ontario Science Centre in Toronto, Canada first opened its doors in 1969 and was one of the pioneers of the "hands-on" approach to museums. It contains hundreds of interactive exhibits ranging from geology and human anatomy to astronomy and modern forms of communication.

According to its website, "The Ontario Science Centre delights, informs and challenges our communities, offering hands-on experiences and engagement with science of local, national and global relevance."

Since 1969 the museum has welcomed over 52 million visitors and is one of Toronto's most popular visitor attractions.

13. The Hong Kong Space Museum is out of this world

The Hong Kong Space Museum in, well, Hong Kong, is an iconic part of the city's skyline. Its enormous central planetarium can't really be missed by any visitor to the city.

Construction began in 1977 with the works completed by October of 1980. The two main exhibitions for the museum are the Hall of the Cosmos and the Hall of Space Exploration.

Both of these are interactive and are designed to enable visitors to learn about space and space exploration through a series of entertaining and educational experiences.

14. Miraikan in Tokyo has robots, lots of robots

Miraikan in Tokyo, The National Museum of Emerging Science and Innovation, is an ultra-modern look at the cutting edge of science and technology.

It has an absolute ton of robots on display including the famous Honda robot.

Unsurprisingly, most of the exhibits focus on Japanese innovation as well as Japan's natural history.

This includes live measurements of the seismic activity of the country, weather patterns and ocean temperatures.

Sustainable development, the mysteries of the universe and genetics are also covered so there’s something for everyone.

15. Science Centre NEMO in Amsterdam is great fun for all

The Science Centre NEMO is located in the Oosterdokseiland neighborhood in the Amsterdam-Centrum borough. 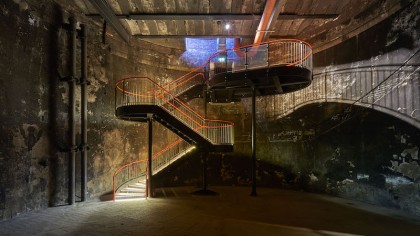 It can trace its origins to 1923, but it has been in its current modern building since 1997.

The museum contains five floors of hands-on exhibits and is officially the largest science center in the Netherlands.

It is a popular tourist attraction with almost 700,000 visitors a year.

Exhibits range from tutorials on wind, water, and solar energy on the roof to its popular "World of Shapes" exhibition on mathematics.

Via: 10 Most Today, Traveller

The Science of Becoming "Interplanetary": How Can Humans Live on Mars?