15 Pens that Engineers Would Definitely Love to Own

These perfectly crafted, extraordinary pens truly fit the needs of intellectuals among us.

Engineers are a unique set of people who can see the extraordinary in the ordinary. They are also very particular about the things that they use on a daily basis.

So when you think about a pen for engineers, it must not fit into the average category. It must be aesthetically pleasing, efficient in its working and must offer an exquisite feel when in use, essentially, the pen must be a cut above the rest.

We made a list of some of the best pens you can get if you are an engineer or want to give it as a gift. These pens house uniqueness, standing out from the ordinary, just the way engineers like it.

Yes, the name signifies the product without any fancy worded jargon. The Pen is the creation of a company called RIIND, founded by two MIT Engineers.

So it’s a pen designed by engineers for engineers and for anyone who loves to appreciate little details in things.

When you first see The Pen, you won’t be able to ignore the cold aluminum stance that it carries. The body of The Pen is machined from aluminum and the designers haven’t done anything outrageous with its design.

But look closely and you will see the subtle details that make The Pen a worthy contender on the list.

The nib of The Pen retracts and protract with the half twist of its top screw in clockwise or anticlockwise direction. The founders remarked that this unique cam system took 2-years to develop.

Another standout feature is the clip that can comfortably clip to more than just pockets as the clip can swivel to a larger angle whilst offering the same clipping force.

This pen is dedicated to all those who have broken their pen fidgeting throughout the day. The Think Ink Pen made by TimeFlyz Reminders house not one, but endless mechanisms that will help with your undeniable urge to fidget.

Engineers do carry the title of “chronic fidgeters” and the Think Ink pen does them justice.

The Think Ink pen comes in a metal housing that is bendable. The pen is completely magnetic and comes with an accessory called Flexo-clip that attaches to the pen magnetically, opening the doors to multiple configurations made for fidgeting, security or portability.

The Ti2 Pen is made for engineers and designers alike. At first glance, the Ti2 might not fall into the usual lineup of beautifully designed pens. But solely basing the looks as a deal breaker would be like judging a book by its cover because when you start using this pen, it will surely win you over.

Right of the bat, the housing of the Ti2 is made from Titanium. It is a costly design element, however, this choice adds to the Ti2’s function rather than form.

The balance that the Ti2 have as a result of the material and symmetrical choice can be summed up as one of the best in the industry.

Coming to the nib, there is a reason why it has a truncated nose cone design element to make it easy to use with rulers and other engineering drawing apparatuses. With this design, the housing won’t touch the sides of the ruler while the user is drawing or drafting.

The ends of the pen have neodymium magnets in them, making it easier to cap and uncap. If you are looking for a pen that is made for drawing/drafting as well as to be your daily driver, this one has got it all.

Do you have to regularly skip between inks at work? Then choose the Coleto Smart 3 from the tried and true brand in the pen industry, Pilot.

The major drawback of using a multi-barrel pen is that the pen will be bulky, making it less portable. The Hi-Tec-C Coleto Smart 3 changes this trend by bundling 3 in a relatively slim form factor.

Coming from Pilot, you can rest assured that the pen has met some strict quality standards before it hit the shelves. The Hi-Tec-C Coleto Smart 3 uses Hi-Tec-C refills from Pilot and they are widely available both online and retail.

Another reason to go for the Hi-Tec-C Coleto Smart 3 is that it holds the most bang for the buck. It is a deal that you can’t afford to miss.

This is a pen that truly embodies its name, the Nano Pen. Measuring at just 57mm in height and weighing only 4.5 grams, the Nano Pen is an advanced yet ultra-portable pen that doesn’t cut corners when it comes to quality.

The Components inside the pen are housed within an aircraft grade aluminum casing and the nib is made from tungsten carbide, an alloy that is stronger than titanium. You can clip the pen in your key ring or inside your wallet and never worry about panicking for a pen when the need arises.

There is something increasingly alluring about pressured pens in the eyes of an engineer. Pressured pens need far more engineering investment when compared to ordinary pens.

Pressured pens were primarily made to enable astronauts to write in zero gravity conditions. Now their availability has been a massive expanse.

The Fisher Bullet Pen uses pressurized cartridges and a tungsten carbide tip, and everything is housed in a solid aluminum casing. If you are looking for a brand that has a strong legacy and a pen that never fails, then Fisher Bullet Pens won’t disappoint at all.

Note: It can even write underwater!

Engineers adore something that lasts, no matter if it’s a machine or passive equipment. PHX Pen is designed and advertised as a writing tool that is made for the ages.

Anyone who likes to own daily drivers that carry an industrial design won’t think twice about owning a PHX Pen.

The body of the pen is made from high-quality stainless steel and the PHX pen uses Pilot Hi-Tec-C for ink (also compatible with Uni-Ball Signo DX). The designers gave the pen a simplistic look as it does not contain any insignia or branding.

In addition to the company’s assurance of its durability, another element of this pen that is going to win you over is its weight and balance. In essence, the PHX Pen is a no-nonsense pen that triumphs over many owing to its sheer simplicity.

The world we live in can turn against us at times that we least expect. The Tactical Pen by 1TAC gives you a fighting chance against odds that rivals your survival.

The Tactical Pen isn’t your average daily driver pen, but it is a tool that can save your life in certain survival situations.

It has a removable steel blade, a tungsten glass breaker, and an 80-lumen flashlight in addition to the ballpoint refill, all contained in a weatherproof aircraft grade aluminum shell.

There is a certain beauty that comes with sharp lines and flawless symmetry. No one else understands these aesthetical details better than an engineer.

Aesthetics is the primary reason why the Hex-o-matic is on this list, the amazing build quality comes second.

The Hex-o-matic packaging also gets a special mention as it makes the unboxing process a true event. The design of the Hex-o-matic follows a Hexagonal midsection with knurled top and grip section.

It comes with the Schmidt Easy Flow 9000 refill, which gives very dark ink and a smooth writing experience.

The Hex-o-matic tops out as a no-worries clicky pen that can easily take the bash and banter of everyday usage.

Rulers and engineers share a special bond as it comes as the most used engineering drawing and measuring instrument. So why not construct a pen around it?

Two creative individuals had the same idea and the result is the Pen type-A. In addition to having a 12 cm measuring stick as a cap, the Pen Type-A is built to last.

If you need some last minute changes to drawings or something to help you draw dead straight lines, Pen Type-A comes to the rescue!

This pen is a reinvention of the ballpoint pen courtesy of Dyson, the world famous vacuum company. When they had the idea of making a new pen, they couldn’t just go with the ordinary, because that is not how Dyson works!

The inception of the Biro came during the after-hours and free times that Dyson engineers get, even James Dyson joined in on the project! So from a company who creates the best of tech, we can’t expect anything less than a marvel, and the Dyson Biro delivers.

The Dyson Biro looks stylish and sleek. The machined clip blends in with the overall design, and it is separately weighted to prevent rolling.

The only drawback with the Dyson Biro is that it’s hard to get your hands on one as the pen is reserved for internal employees and Dyson partners. If you can get one, it is a rare piece of engineering that rightly fits an engineer.

It sits peacefully as a work of art.

The ceramic polymer coating, Cerakot, provided on top of the metal ensures that the Mark One can stand the test of time. The pen comes in two colors, black or white.

To stand different from the competition, in addition to the unique styling, the Mark One also has a custom all-metal click mechanism, the first of its kind.

13. The Jetride by Joonyoung - Buy Now

This entry is solely dedicated to design engineers, who conceptualize marvelous designs and bring them to life on paper. The Jetride is the result of 3 years of hard work aimed at helping you to never draw a messy line.

The Jetride has nibs on each end, one for regular writing and the other for drawing straight lines. The end that draws the straight lines has two cambered wheels, for guiding the end.

It is a really handy tool for any engineer or artist who wants to draw straight lines or perfect curves without an external referencing tool.

This engineer pen is made from Grade 5 titanium shell and rocks a BOCK 250 nib. It also has a tungsten carbide glass breaker point on its cap, adding points to its utilitarian side of things.

To end the list, we had to find something that would truly embody the essence of engineering. We had to find a pen that can undoubtedly be called an Engineer’s pen. Messograf Pen Calipers is one such pen.

In one word, it’s an engineering instrument box built around a pen.

The pen houses a ruler, caliper ruler, tire gauge, and even a thread scale. The Messograf Pen Caliper is marketed as the perfect workshop companion and we couldn’t agree more! 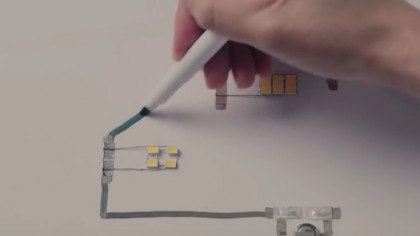 The German ink cartridge brings back this tool into the realm of pens and writes smoothly when it’s at it. If you’re in search of that perfect gift for your engineer friend, this is the best one!

Ever thought that the world of pens was this diverse? It’s surprising to see how an everyday instrument can be reimagined to a variety of configurations.

Engineers will surely dig love to own these pens as they show precision engineering, craftsmanship and the initiative to do something different!

Interesting Engineering is a participant of the Amazon Services LLC Associates Program and various other affiliate programs, and as such there might be affiliate links to the products in this article. By clicking the links and shopping at partner sites, you do not only get the materials you need but also are supporting our website.

Astronomers Want to Build an $11BN Telescope That Would Outclass Hubble