17 Innovations That Will Power the Shift to Smarter Factories

Meet 17 technologies leading the way to a new industrial revolution.

We're only on the verge of Industry 4.0 - and all new industrial revolutions are driven forward by innovations in automation, A.I., and the Industrial Internet of Things (IIoT). The way factories operate is sure to change dramatically over the next few years as a result.

Here are just some of the technologies that will pave the way for smarter factories, along with examples of factories and warehouses that have already started to implement some of these cutting-edge innovations.

1. The Audi Smart Factory: The Model Factory of the Future

Audi raced ahead of the competition in 2017 when they revealed their smart factory. The factory implements a number of new manufacturing technologies that are sure to become more common across many industries soon.

Included among these technologies are VR headsets for the design process, 3D printers for the production of parts, and drones for transport. It's been suggested that the new processes will improve productivity by 20%.

In 2016 General Motors announced that they would be adopting a robotic glove designed by NASA, for use by their factory workers. The glove is based on a design that was created for use on the International Space Station.

The benefits of the glove are manifold. One major benefit is the reduced strain on the workers' own arms. Additionally, it allows workers to better grip and lift heavy items. While robot workers are becoming increasingly common, what human workers remain will likely be wearing robotic implements like these gloves to aid in their work in future.

Earlier this month, innovative Japanese start-up Preferred Networks received $2 billion in funding. The company, who up until now was best known for an art-coloring app, are now branching out into the application of deep learning to the manufacturing industry.

The start-up has ties to two of the biggest industrial robot manufacturers - Toyota and Fanuc Corp. While programming industrial machines to perform certain tasks can take a number of days for a coder, deep learning allows them to teach themselves far more quickly and effectively.

SecondHands is a robot that does exactly what its name implies - it offers a second pair of hands to human workers when maintaining other robots. It's part of the Horizon 2020 program, a European initiative which aims to further the development of technology while also creating human jobs.

SecondHands will be able to provide assistance without prompting, using action recognition and 3D pose estimation. Not only can it assist in passing tools, but it also offers helpful advice on which course of action to take.

Created by Professor Ken Goldberg and his student Jeff Mahler from U.C. Berkeley, Dex-Net is a software that allows robots to recognize and organize complex shapes in rapid speed. The robot Goldberg and Mahler used for testing the software featured two arms and a 3D sensor.

Thanks to the software, the robot could deftly handle objects it had no prior knowledge of, and sort through them in record speed. Software like this could result in a massive increase of productivity if integrated into industrial manufacturing systems.

6. The Ocado Warehouse: Staffed By Robots

The Ocado Warehouse could very well be a window to warehouses of the future. The automated warehouse is staffed by a team of robots, who empty, transport, and replace crates of products.

The autonomous robots can recharge at charging stations when needed. Once the robots have chosen and transported products to a picking station, the products are then prepared for shipping by other robots and human workers.

7. JD.com's Fully Automated Warehouse: Another Glimpse at the Future

Just last year, Chinese online shopping giant JD.com unveiled its fully-automated warehouse manned by robots. The super productive warehouse can handle as many as 9,000 orders in a single hour.

The tech implemented in the warehouse includes hi-def image scanners and self-driving forklift trucks, and can effortlessly breeze through a workload that would normally require the labor of 180 human workers. Theirs is just one example of the kind of facilities we can come to expect with industry 4.0.

Just last month Apple showed off Daisy, a recycling robot that can strip apart iPhones and allow the materials to be reused. It's highly likely that other smart device manufacturers will follow suit with similar robots in future.

The benefits of a device like Daisy are twofold. For starters, it allows customers to safely dispose of their discarded smart devices. Secondly, it reduces the resources spent on sourcing the materials for new devices, as the materials can be taken from older models and reused. 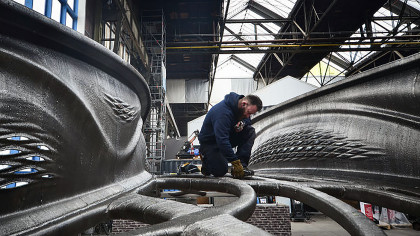 One of the biggest breakthroughs when it comes to manufacturing has been 3D printing. Thanks to this technology, factories will be able to produce parts and components like never before.

One recent and exciting example of how 3D printing technology can change the manufacturing industry is MX3D's six-axis robot arm. The arm can print and construct complicated metalwork in mid-air, from basically any angle. This improves not only the speed at which the parts or object can be produced, but also the structural integrity.

10. TE Connectivity: The Importance of Sensors in the Workplace

With factories gradually filling with autonomous machines, it's imperative that there are proper structures in place to prevent any accidents. One key component of this is sensors which allow machine-to-machine communication.

TE Connectivity is just one company producing sophisticated sensors that can transmit data between industrial machines and smart devices, keeping everything running smoothly. As factories become smarter, companies like TE Connectivity and their outputs will become vitally important.

When it comes to creating smart machines that communicate with one another in factories, there are a number of options for connections. One possible connection worth exploring is the utilization of satellite technology to transmit data between machines.

Kepler Communications are doing just that, allowing factories and production lines in more remote areas to connect their devices and machines via satellite networks. Technology like this means that no factory will have to be exempt from the smart revolution, no matter where they're located.

Oftentimes issues in manufacturing come down to simple human error. New technologies are allowing us to cut down on these issues by offering capabilities in fault detection that far exceeds that of human workers.

Landing.AI is a company that creates smart technology that can find the tiniest of faults in circuitry and other aspects of a machine that might not be immediately apparent to a human. As machinery in smart factories will all be connected and communicating with each other, the AI will send an alert when a fault is found, immediately halting the machine in question so that it can be fixed.

With the influx of new manufacturing technologies, it's reasonable to imagine that in the near-future factories will have the ability to keep producing at all hours of the day, every single day. Project Skywalker by start-up Voodoo Manufacturing is just one example of what such a set-up could look like.

Project Skywalker consists of a cluster of 3D printers and a robotic arm that can unload the parts printed, and maintain the printers themselves. Voodoo Manufacturing believe that through their system, one arm could tend to approximately 100 3D printers. This would mean that the machines could work around the clock, reaching levels of productivity that would be unthinkable with a human staff.

It's one thing to program a robot to work like a human, it's another thing to have a robot teach itself through observing the work of their human colleagues. Companies like Indian start-up Drishti have been working on action recognition AI that would allow robots to observe and replicate human manufacturing procedures.

With many workers uncertain of what automation could mean for their job security, systems that allow robots and humans to work symbiotically like this could be the answer to many fears.

While 3D printing is a huge boon to manufacturing, it can still be a costly and time-consuming process. To cut down on the time it takes to 3D print a product or part, researchers at the Lawrence Livermore National Lab teamed up with scientists from MIT, UC Berkeley, and the University of Rochester to create a new, faster method of 3D printing.

The method utilizes holographic imaging, achieved through the use of multiple lasers, to create a suspending 3D shape that is then cast with resin. Through using this method, researchers were able to create an array of complicated structures in a fraction of the time it would take through more conventional 3D printing means. If applied to manufacturing facilities, this technology could drastically speed up the production process and result in higher productivity.

16. Augmented Reality Technologies: Allowing Workers to Design and Build Like Never Before

Augmented reality has seeped into daily life and is being used in everything from mobile games to heavy industry. The innovative tech can assist with every process of production, straight through from design to quality control.

Airplane manufacturer, Boeing, has already started using AR in their assembly processes. They've been using Google Glass and Skylight software to give technicians valuable insight and instructions when completing complicated wiring tasks. It's likely that other industries will adopt similar uses for the technology, allowing their output to be built with the utmost precision.

17. Exoskeletons for Workers: The Utmost in Worker Safety and Strength

Like the NASA glove mentioned earlier in this article, full-body exoskeletons are another piece of wearable tech designed to protect workers and increase their strength. For many, it's the perfect compromise between an all-robot staff and protecting human jobs, as it gives human workers advantages in strength and stability usually reserved for their mechanical counterparts.

The Ekso vest is just one example of an exoskeleton designed for factory workers. The vest is already in use in a number of Ford factories, and employees have praised the device for allowing them to conserve physical energy throughout the workday while allowing them to lift weights that they otherwise would be unable to manage.