17 Of The Funniest Memes About Science and Scientists

When you combine memes with science you basically get the best memes. This has been scientifically proven (citation needed).

If we are truly honest with ourselves nothing improves our day more than a good old meme. 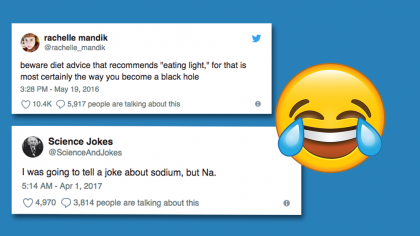 Memes bring to life our innermost thoughts and musings in the silliest funniest ways. They expose the human experience in stimulating ways and make us giggle.

In fact, let us face it, all good memes make us realize how much we all think alike. But when you combine this magnificent art form, yes we went there, with science we can almost reach a state of Nirvana.

The following 17 are some of the funniest science-themed memes out there. Please remember the following are in no particular order and, believe us, this list is far from exhaustive.

This is probably one of the most shared funny memes about science. A timeless classic, that we are confident you've chuckled about at some point on your social media feed.

Like all the best comedy its not immediately obvious what the punch line is, but once you see it you marvel at its simplicity of delivery. A true work of art, as memes go.

Kudos to the creator!

2. Only academic research scientists will understand

As if the life of a research scientist wasn't hard enough they need to constantly justify their existence through research grants. To most the process of applying feels like more a game of chance than a true level playing field.

This meme sums up the process in one simple, yet effective, short cartoon strip.

Whilst it might fall flat for anyone who has never had to run the gauntlet of research grant applications it will make those who've experienced the process chuckle heartedly.

You might need to refresh your atomic theory first before finding this one funny but trust us it is. As any chemist will tell you the 4s orbital of an atom has a lower energy than the 3d one.

This means electrons will tend to fill that first and are also the lost first during ionization.

With that in mind, this meme transforms from a random assortment of letters, numbers and stunt performing car to a rather sophisticated and funny scientific meme.

Whilst this one might go over your head (pun intended) on first passing it does grow on you the more you look at it. It's probably to do with the crazy cat.

Glossing over the fact that serotonin is actually the neurotransmitter this meme is funny once you understand the point being made.

Basically its a joke about our desperate pursuit for joy in a sometimes seemingly grey and mundane world.

5. Do you like Pi and snakes? Check this meme out

Ok, this one is silly but hilarious. The best memes always have the laziest punchlines and this one is pure genius. Who doesn't like animal-math crossover jokes - be honest.

We are not sure if that's actually a thing but it should be given the superb quality of this specimen. To be honest we are annoyed we hadn't thought of it first. Good job.

Judging by the reactions to this meme on Reddit it wasn't just Einstein who was annoyed. Whilst the meme is meant to be a joke some, including Einstein, just can contain their inner passive aggressive OCD tendencies.

To be fair the combination of Einstein's famous formula with that of Pythagoras is an old joke but it appears the creator took too many liberties with this one.

But who cares, we love the bottom part of the meme regardless. That's a scene we'd love to see in real life.

7. Here are some suggestions for a science-themed tracklist (maybe not)

This funny science-based meme is a little lame at first but does grow on you the more you think about it. To be honest our favorite part is the blatant rip-off of a particular online music streaming service that will remain unnamed here.

As for the songs chosen we give them a 5 out of 10. There is an entire back catalog of other science-based song titles they could've chosen from. No Super Massive Black Hole, for example.

8. Kelvin or Calvin, Hobbes or Higgs?

This take on the classic Calvin and Hobbes comics is true genius. We admire the imagination of its creator and are prepared to gloss over the inherent nonsensical combination of a measure of atomic energy and the excitation of the Higgs field.

After all, can we really compare Kelvin to a six-year-old mischievous boy? And where do we even start with comparing the Higgs Boson to an animated stuffed tiger?

Are we overthinking this too much?

Either way, its very well done and we could see it making a great T-shirt design in the not too distant future.

9. On the subject of Kelvin

Here's an example of a scientific meme that breathes life into a timeless school joke. It's so silly you can't help but chuckle at it.

We concur Kelvin is just 0K.

Being a meme we'll ignore that fact the scales are a 'little' off, to say the least. At the end of the day, you get the idea.

We must admit, whilst not technically a meme, this Halloween display at a Biochemistry Faculty is very creative. If you blinked and missed the joke don't fret look again more carefully.

If you still can't see the joke take a look at the tombstones. Still missing it? Then let us explain.

The first is a representation of the Bohr-Rutherford model of the atom and electrons (now defunct), the second is of phlogiston (a fire-like element) that was once thought to exist in all combustible materials, and the last 'Vitality' is a long defunct theory that all organic compounds could only come from some vital force of life.

Very clever and witty to say the least.

11. Would you like UGG Boots or an amino acid?

Here's another science-based meme that really needs the audience to have some 'insider' knowledge of biochemistry. It turns out, coincidentally, the that the brand UGG also happens to be the genetic codon for an amino acid called Tryptophan.

This amino acid is essential in humans and is the precursor to the vital neurotransmitter serotonin and melatonin.

A subtle joke and one that would likely go over many people's heads without explanation but funny once you understand the premise.

12. Everything should be perfectly balanced

Remember your stoichiometry from school? Do you like Guardian of the Galaxy? Then this meme is perfect for you.

This meme perfectly, ahem, balances the fundamental exemplar or stoichiometry with popular culture. But more importantly is it funny?

Well, it made us chuckle, what about you?

This meme perfectly sums up the non-existent conflict between the esteemed George Ohm and Gustav Kirchhoff (that we might have just made up) and their competing formulations for resistance in an electrical circuit.

Whilst most are probably familiar with Ohm's classic formula, many might not recognize Kirchhoff's vector form of the equation often used in electromagnetics and material science.

We'll just leave it at that.

Here at IE, we do like to see those "blue-sky", vacuous memes being dismantled in sarcastic response memes. We know you do to, if you're being honest.

This funny science meme is a perfect example. "Storms don't last forever" do they?

Though we might have spoken too soon. Now we feel silly.

Poor old Pluto. It went from obscurity to inclusion as on the planets of our solar system only to be relegated to planetoid status in less than a century.

If Pluto could talk we are confident it would be pretty peeved at its inglorious treatment. Whilst it's not technically all NASA's fault this meme would be certified 'fresh' by the former-planet Pluto.

We've got your back bro.

Did you know that if you have more birthdays it's more likely than not that you'll live longer? Now, aren't you glad we have legions of scientifical literature and talented cats to conduct this kind of research for us?

Is it dead or alive? Perhaps it's in a perpetual state of death and undeath, a never-ending torment of pain and ecstasy. Do we dare take a peak to find out? Would that make us a cat killer?

A fine and dandy but what nobody ever thought to consider is whether our subject cat had license to actually try to escape. This meme puts to bed all doubt on the subject, it does indeed live.