May the 4th is International Star Wars Day. Here are some ways to celebrate the famous franchise all year 'round!

By  Saoirse Kerrigan
May 04, 2018
Jorge Figueroa/Flickr

May the 4th be with you! Star Wars Day is upon us once again, so get ready to celebrate George Lucas' iconic space opera franchise.

Celebrating Star Wars doesn't have to be limited just to today, though. Here are some ways you can indulge in your love for the films all year 'round.

1. Become a Jedi: Practice Your Lightsaber Skills At A Gym Near You

Want to test your skills in combat? Try dueling with lightsabers. The iconic weapons don't just exist in the Star Wars universe - you can get your hands on one at a number of gyms across the globe.

LudoSport International hold lightsaber lessons and tournaments for budding Jedi who want to get fit and have fun. Their Italian-made lightsabers come with an authentic soundboard, and are built for intensive use, giving you the best experience available.

2. Visit the Sets: Travel to A Galaxy Far, Far Away 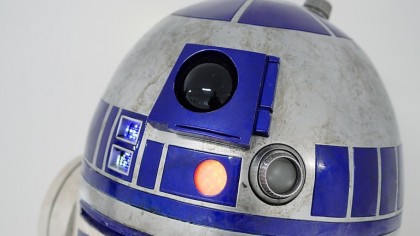 Star Wars is known for its incredible alien landscapes and unique locales. Luckily, you don't need to enter hyperspace to visit these amazing places. You can check out plenty of famous Star Wars backdrops right here on Earth.

Why not vacation on Luke's home planet of Tatooine, AKA Matmata, Tunisia? You can even stay in Hotel Sidi Driss, best known as the home of Luke's Uncle Owen and Aunt Beru. If you're not fond of sand (after all, it is coarse, rough, and irritating, and it gets everywhere) you could make a quick getaway to Skellig Michael off the coast of County Kerry, Ireland. The scenic island was the backdrop of the most recent Star Wars flick, The Last Jedi.

3. Peek Behind the Scenes: Visit the Letterman Digital Arts Center

Another trip worth making for any hardcore Star Wars fan is a visit to the public gardens of the Letterman Digital Arts Center in San Francisco. The center is home to Industrial Light and Magic, LucasArts, and the marketing department for LucasFilm.

4. Start Building: From Death Stars to Y-Wings, There's a Set For Everyone

LEGO has been partnered with Star Wars for quite some time, releasing themed building sets and even video games. This year, in honor of Star Wars day, LEGO have released a new Y-Wing set aimed at serious collectors.

The set includes a whopping 1,967 pieces, making it a project for dedicated builders with a lot of time to spare. Alternatively, you could opt for any of LEGO's other Star Wars vehicles - ranging from the formidable Death Star to the iconic Millennium Falcon.

5. Host A Marathon: Settle In For 20 Hours of Classic Cinema

What better way to celebrate than to dedicate a weekend to watching one of cinema's most enduring and enjoyable franchises? At present, watching every Star Wars film would take you about 20 hours and 10 minutes. That's including the original trilogy, the prequel trilogy, Rogue One, and the two installments of the latest trilogy. We don't recommend adding the Holiday Special to your watchlist, but you're free to make your own choices.

If you're still in a celebratory mood after almost a full day of watching the films, why not check out some of the critically-acclaimed Star Wars TV shows like 2008's Clone Wars? There's more than enough Star Wars media out there to fuel the most epic marathon.

6. Learn the Lore: Delve Into Hundreds of Star Wars Novels

Since Disney's acquisition of Star Wars in 2012, the expanded universe of the franchise's many novels ceased to be considered canon. However, that doesn't mean you can't still enjoy these great Star Wars tales while waiting for the next movie release.

There are books that follow the adventures of a number of much-loved secondary and tertiary characters like Yoda, Lando Calrissian and Boba Fett. Alternatively, you can gorge yourself on the countless Star Wars comic books that have been released over the years, and continue to be produced. There's no shortage of entertaining stories set in the Star Wars universe.

If you're watching 20+ hours of space opera, you'll probably want snacks at some point. Why not whip up a few treats that keep the theme of your galactic binge fest?

Choices can be as inventive and creative as Sarlaac Bundt cake and Leia Oreo truffles, or as easy and quick as Blue Milk. Take inspiration from the Star Wars universe and see where your creativity takes you.

8. Get Up Close and Personal: Check Out the Star Wars Identities Exhibition

Star Wars Identities opened in Brussels, Belgium on April 2nd and will run until September of this year. But don't fret if you can't make it in time, as the traveling exhibition is set to announce more locations and dates throughout the year.

The exhibition features over 200 original props, costumes, and pieces of concept artwork from the LucasFilm archives, providing an unparalleled inside look at the creation of the franchise. Must-see pieces include the Millennium Falcon, an AT-AT, and both BB-8 and R2D2.

9. Free Reading: Get a Free Copy of a New Star Wars Comic

While you already know that May 4th is Star Wars Day, you might not be aware that May 5th is Free Comic Book Day. It's a double whammy of geeky fun, and not one you want to miss out on.

In honor of both occasions, you can pick up a free copy of a new Star Wars Adventures comic featuring  Han Solo and Chewbacca. Check out your local comic book store and enjoy!

10. Catch Up on Shorts: New Episodes of Star Wars on YouTube

Did you know there's an official Star Wars mini animated series on YouTube? Buckle up and get ready to enjoy some out of this world cartoons based on some of your favorite new characters.

Star Wars: Forces of Destiny are set to release a series of new episodes on Star Wars day, so catch up with the older episodes while you still can. Episodes last an average of three minutes, making them a fun way to enjoy Star Wars on your lunch break.

11. Roar for Change: Raise Funds for Charity the Wookie Way

From May 3rd to May 25th Star Wars: Force for Change will be donating $1 to UNICEF for every Facebook, Twitter, and Instagram post that's tagged with #RoarForChange. They're donating a maximum of one million dollars to help children in need around the world, and it's never been easier to help a good cause.

All you have to do is film yourself performing your best Chewbacca roar, and tag the post with #RoarForChange. Unleash your inner Wookie and become a hero.

12. Game On: Play Your Way Through the Star Wars Universe

If you're a gamer, there's no shortage of ways to immerse yourself in the Star Wars universe. The franchise has 35 years worth of game releases for you to enjoy, spanning across almost every conceivable genre.

Whether you want to take a walk on the dark side, engage in epic space battles, or simply dance - there's a Star Wars game for you.

Though it's still under construction, Disneyland's Star Wars Land promises to be the best way to experience the world of the films for yourself. Until it opens, however, you still have plenty of opportunities to indulge in your Star Wars fantasies at Disneyland.

From their ever-popular Star Tours ride, to their Galactic Spectacular, Disney knows how to cater to Star Wars superfans. Why not check out their Galactic Nights on May 27th, which features panels, spectacular projection shows, and attractions that run all night long.

There are few movie themes as instantly recognizable as Star Wars'. John Williams' score is an incredible piece of music in its own right, and you can enjoy the full effect of it live in concert.

Star Wars in Concert is a global orchestral tour, and in 2018 is screening A New Hope with live musical accompaniment. Look up dates and locations to find a showing near you, and don't miss out on this special chance to enjoy the movie and the music that started it all.

Celebrating your love of Star Wars on your own is all very well and good, but geeking out with thousands of others is something well worth experiencing. Why not seek out a local Star Wars convention, or make the trek to the biggest gathering of Star Wars fans in the world - Star Wars Celebration?

Star Wars Celebration started in 1999 to mark the release of The Phantom Menace, and has continued to grow ever since. The Orlando, Florida convention is on hiatus until 2019, but that just gives you all the more time to plan your trip and finish your costumes.

16. Get Ready for Solo: The Latest Star Wars Film

If you've already watched all the previous films, TV shows, YouTube series and more - worry not. The next Star Wars release is almost upon us. The latest film, Solo, gives us an exciting glimpse into the backstory of top pilot and scruffy-looking Nerf-herder, Han Solo.

The film is set for a release on May 24th across Europe and Australia, and May 25th in the US and Japan. So there are only a few more weeks to go until you get your next Star Wars fix!

17. Customize Your Wheels: Turn Your Car Into a Star Wars Vehicle

Do you daydream about piloting an X-Wing? Why not customize your car to reflect your interests and live out your Star Wars fantasy?

Nissan's 2017 car show will give you plenty of inspiration on how to transform your everyday car into an intergalactic ship, ready for battle. You can even add your own droid co-pilot.