Building on water is one of the most challenging tasks an architect can undertake. These amazing structures make complex design look effortless.

For centuries, intrepid architects and engineers have been building upon the water, either by reclaiming land from the sea or through creating incredible wooden foundations. Needless to say, building on water is no easy task.

With land at a premium, and set to become ever more scarce with our ballooning population, perhaps aquatic structures like these will someday become far more common. From airports and residential areas to parks and galleries, the potential uses for off-shore buildings are endless.

Here are just some of the world's most incredible architectural wonders built on water.

Completed in the 17th Century, the Punta della Dogana stands as one of the most iconic buildings in Venice. It was originally designed to serve as a customs house by architect Giuseppe Benoni. Like many of Venice's buildings, the foundations for the Punta della Dogana were built by pushing long stakes of wood deep into the sand beneath the water.

Its function as a customs house ceased in 1980, after which the building was sadly neglected. In 2009, it reopened as an exhibition space and now houses touring exhibitions.

In 2001, Nakheel Properties began construction of Palm Jumeirah - an artificial archipelago in the Persian Gulf. The land was first reclaimed for the project by Jan De Nul and Van Oord.

These Belgian and Dutch contractors specialize in the dredging work necessary to make the concept of the Palm Jumeirah a reality. Construction of the man-made islands and the buildings upon them were officially completed in 2009.

As of 2018, Palm Jumeirah is home to 4,000 luxury villas, as well as the Atlantis resort - one of Dubai's most instantly recognizable hotels.

Located between Denmark and Sweden lies Peberholm - an artificial island specially designed to accommodate the bridge and tunnel connecting the two countries.

The bridge was constructed by the Øresundsbrons organization, and though it's inarguably a triumph of modern architecture, it is also widely considered to be a significant biological project. The island attracts many migratory species and, thanks to its distance from human settlements, is an ideal location for research and observation.

This is no accident, as Øresundsbrons intended for the design to support and preserve the ecosystem of the surrounding area. Today the island is a successful structure benefitting both commuters and the environment.

Kansai Airport was created to ease congestion from the busy Osaka Airport nearby. Built on an artificial island in Osaka Bay, architects had a lot to consider when designing the proposed airport.

The airport had to be specially designed to withstand earthquakes and typhoons, both of which are not uncommon to the area. The airport officially opened in 1994 and survived the 1995 Kobe earthquake thanks to its incredible and sturdy design.

Located along the Hong Kong's stunning Victoria Harbour, the Convention and Exhibition Center is one of the stand-out buildings in this bustling city.

Designed by Larry Oltmans, the first phase of construction began in 1988 atop land that had been reclaimed from the city's Gloucester Road. Phase two followed in 1994, with its foundations built on an artificial island.

Today, the center is one of the most popular venues for trade shows and exhibitions in the East.

Officially opened in 1971, Ontario Place is a complex consisting of three artificial islands located on Lake Ontario. Originally built and operated as a theme park, as of 2011 Ontario Place has been home to event venues and a marina.

The site is best known for its geodesic dome, officially known as the Cinesphere. Designed by architect Eberhard Zeidler, the Cinesphere is the world's first permanent IMAX theatre.

Dubai is an unofficial capital for off-shore architecture, and the Burj Al Arab is one of its most magnificent examples. As the third tallest hotel in the world, the Burj Al Arab stands an incredible 920 feet (280 meters) tall.

The hotel was designed by architect Tom Wright, who wanted to create a structure as instantly recognizable as the Sydney Opera House or the Eiffel Tower. It is the only skyscraper in the world to sit on an artificial island and is accessible by bridge. It was officially opened in 1999.

8. The Venetian Islands, USA: A Man-made Archipelago, 100 Years in the Making

Miami's Venetian Islands are a group of artificial islands, whose conception dates back to the early 20th Century. In 1913, the Collins Bridge was built by John S. Collins and was set to become the link from the islands to Miami Beach. At the time of its construction, it was the longest wooden bridge in the world.

Construction of the islands took place throughout the 1920s, but was stalled due to the destruction caused by a hurricane in 1926. The first island to be completed and inhabited was Biscayne, which housed an airport in the 1930s. Today, Biscayne has a population of over 13,000 people.

The Sebitseom is comprised of three man-made islands in Seoul's Han river. Completed in 2006, each of the islands is designed to represent a different stage of growth - from seed to blooming flower.

In 2011, the islands were officially opened to the public. They feature a center for performing arts, a cultural experience facility, and a water leisure park.

10. Madeira Airport, Portugal: One of the World's Most Dangerous Airports

Also known as the Cristiano Ronaldo airport, Madeira airport holds the honor of being one of the world's most dangerous airports thanks to its perilous location facing out to the ocean. The airport's runway is so dangerous, in fact, that pilots must complete special training before attempting to land their aircraft there. 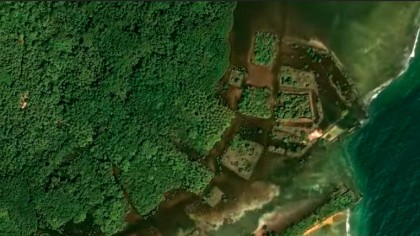 In the year 2000, the runway was extended by building a platform over the ocean. The extension was carried out by Andrade Gutierrez and is supported by 180 columns driven into the seabed.

11. Our Lady of the Rocks, Montenegro: A 600-Year-Old Floating Church

This stunning church dates back to the mid-15th Century and sits upon an artificial island in the Bay of Kotor, Montenegro. The island was constructed from a collection of rocks thrown into the waters over time.

The original church was pillaged by pirates in the 17th Century, and later upgraded in the early 1700s. Today it is open to the public, and also contains a museum where you can learn more about the island's fascinating history.

The Principality of Sealand is a micronation, situated off the coast of Suffolk, England. Originally built as an anti-aircraft defense platform during World War II, the structure is now considered one of the world's smallest countries (despite having no real sovereignty status)

It was originally known as HM Fort Roughs upon its construction in 1943, the structure consists of two hollow towers and a pontoon base. In the 1960s, it became home to squatters and the pirate radio station, "Wonderful Radio London".

The island features a walkway and workout space and is the third largest island in Paris. The replica Statue of Liberty was added on July 4th, 1889, and was donated to the city by American expats.

14. The Pearl-Qatar, Qatar: An Off-shore Oasis of Luxury

Spanning 1.5 square miles (4,000,000 square meters), the Pearl-Qatar is a major residential and commercial artificial island. Created by the United Development Company, the site is already home to over 12,000 residents, and continues to grow.

It was designed by Callison and is set to add an additional 105,000 feet (32 km) of coastline to Qatar. The full construction is expected to cost $15 billion.

15. Amwaj Islands, Bahrain: At the Forefront of Innovation

Located in the Persian Gulf, the Amwaj Islands are a complex of artificial islands opened in 2016. Though construction began in 2002, it is only in recent years that the islands' infrastructure was completed, making them fit for residents.

Developed by Ossis Property Developers, the islands feature a floating city, lagoon, and water park. The construction of the islands utilized many new technologies, including vacuum sewerage and land reclamation through geotubes.

Built in 1887, Pampus was originally a seaport located in in the IJmeer. It was built atop an artificial island, comprising of over 1.5 million cubic feet (45,000 cubic meters) of sand.

Construction took eight years to complete, at which time the fort was commissioned. By the mid-1930s the fort had been abandoned and was looted for wood by citizens of Amsterdam during the Second World War. In 2007, the fort was opened to the public and now houses a museum.

17: Macau Airport, Macau: A Landing Strip In the Sea

Located on Taipa Island, Macau International Airport was opened for business in 1995. Its landing strip is built on reclaimed land off the island's coast, giving the appearance of a runaway in the middle of the sea.

The runway is serviced by two causeways, which connect it to the island proper. It operates 24 hours a day and can accommodate 6 million visitors a year.

18: The World Islands, United Arab Emirates: A Miniature Version of the World

The World Islands are perhaps one of the most ambitious off-shore projects in Dubai. Constructed from sand dredged from Dubai's shallow waters, the islands are designed to represent a map of the world.

Construction of the islands began in 2003 but halted following the 2008 financial crisis. As of 2016, construction of the project's Heart of Europe section is well underway, with an expected opening date of 2020.

Today more than 1,000 people live in Durrat al Bahrain. The ever-growing settlement is home to 172 private villas, a golf course, and a marina.

Will a Computer Actually Work on Logic Gates Running on Water?