WWII memorabilia and militaria fans can find the perfect piece to match their collection on all corners of the internet.

Looking for some WWII engine parts, weapons, and odd pieces you can buy on the internet? Then you've come to the right place. 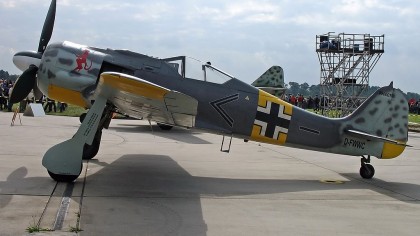 We've scoured the internet for some great examples out there. Be warned, as most of these are auction items and they may have been sold by the time you read this article.

The Dornier DO217 was a German, twin-engined bomber that was designed in 1937 that entered service in 1941. It is one of the more iconic of German bombers but less famous than the Heinkel He 177. Thanks to the wonders of the internet you can own your very own piece of one. This piece once housed one of the bombers' BMW 801 Engines.

Here's an item you don't see every day for sale. This genuine pre-WWII logarithmic slide rule comes in its original case and is as useful today as it was almost 90 years ago.

For just under 1000 bucks you can get your hands on this very rare piece of WWII memorabilia, a WWII Army Air Corp Turret Control.

You too can own your very own piece of history with this selection from the famous Grumman TBM-3 Avenger Torpedo-Bomber. This lot contains the tail wheel gear door, used front hinged air deflector and front upper pilots windshield plexiglass.

The seller lists these as parts from JU-88, FW-189 and ME-109 German aircraft shot down during the battle of Stalingrad. Authentication is key, so buyers should get an expert's opinion.

According to the seller, this is a genuine AVRO Lancaster oxygen flow indicator from WWII. This unit was generally fitted to Lancasters, Halifax's and other aircraft of the era. Quite a nice piece of WWII memorabilia really.

If you have ever fancied some German WWII era goggles here is your chance. This nice item is pretty good condition given their age. According to the seller, the rubber is starting to fail. It is 100% WWII and cited as 'not a modern replica'. But of course, buyer beware.

This is a lovely WWII item that could still be used today. Made of celluloid and Bakelite this pen is stamped 1942 and was probably the property of a German Officer during the war. It really is quite a nice piece.

This Soviet Russian buttonless parade dagger/dirk is said to be from 1945. It really is another nice piece of WWII militaria and would be a great addition to any collection.

This selection of 5 authentic, not to mention original, WWII Kriegsmarine uniform buttons are fantastic. These buttons are in great condition and would be a nice addition to any collection of WWII items.

The rigors of war effect civilians as much as the soldiers. These Canadian ration tokens remind us of the civilian sacrifice. These interesting items would make a great addition to any collection.

The Gurkhas were and still are one of the world's bravest and most feared combat units in the world. Their actions during the two world wars of the 20th Century are without rival. So why not own a piece of their legacy with this 26th Gurkha Rifles cap badge?

No list of WWII items would be complete without one of the more iconic weapons from the war, the German Stick Grenade. This is a lovely example and will only set you back about $600. Not bad for owning a piece of history.

For as little as $40 you get to own an actual original German ammo pouch. According to the seller, this item has some separators missing. It seems to be in a very good condition otherwise and would be a nice addition to someone's collection.

This is a fantastic piece of WWII memorabilia and one of the more iconic items of the war. Used between 1943 and 1978 these US Army Chemical Corps M2A1 Flamethrowers saw active service in many difficult combat zones.

This is an incredibly rare item and another one that is excellent condition. The item is dated 1938 and was part of a haul of untouched items from a military warehouse in Germany by the lucky seller.

Here's a very interesting item indeed a vintage Aircraft Engine Operation and Test Technical Handbook. It is dated 1941 and, according to the seller, is in very good condition.

This is something you don't see every day: a German Artillery Theodolite. It even comes with the original Swiss Box. This would have been used to calculate the distance and trajectory needed for the artillery piece to hit its mark.

All of these small WWII items are great but why not up to the ante and buy yourself a restored but static ME-262? Before we get your hopes up this one cannot fly. This iconic and groundbreaking aircraft can be yours for as little as $680,000. Not bad at all.

And how about a flyable WWII aircraft? This restored Messerschmitt BF-109G ought to do the trick. For as little as 6.95 million Euros, "Yellow 27" can be yours.