A new study shows how powerful hurricanes can transform the anatomy of animals just as much as they can shape the lives of humans.

A team of biologists from Washington University in St. Louis recently published a study that documented the physical traits of lizards before and after 2017's active hurricane season.

From Hurricanes Harvey, Irma, and Maria, the 2017 hurricane season racked up nearly $300 billion in damages. They devastated homes, nearly leveled communities, and kept entire islands without power for months on end. From an animal's perspective, however, the destruction was equally devastating. The researchers took just one type of lizard -- the anole lizard commonly found on the island of Turks and Caicos -- and compared the lizard's before and after the hurricanes hit the area.

The entire study, published in a recent issue of Nature, came about rather serendipitously. The researchers collected data on the lizards just weeks before the first major hurricane hit the island. They then went back weeks after to see how the lizards responded to the natural disaster.

“Hurricanes are in the news, and it seems that they’re becoming more destructive,” said Jonathan Losos, the William H. Danforth Distinguished Professor at Washington University and professor of biology in Arts & Sciences. “Something like this has never been documented before because it’s so difficult. The timing had to be just right.”

Losos collaborated with Harvard postdoc Colin Donihue on the study. Donihue was originally looking for information about the anole for research on invasive species. After the hurricane, however, Donihue quickly realized he might have an entirely different set of data in his hands.

Donihue said the events of Hurricane Irma (which made landfall on Sept. 8, 2017 on Turks and Caicos) could be considered a "selective event" if the team discovered genetic adaptations within the anoles.

“Heading back to Pine Cay, we weren’t sure what we’d find, but when we got to the field and saw a few lizards running around, we were eager to get catching and start measuring,” said Donihue, winner of a National Science Foundation (NSF)-funded fellowship.

“We walked exactly the same transects we had the last time,” Donihue said. “There were definitely fewer lizards. We had to work harder to catch our sample size.”

The teams took two days collecting as many lizards as they could, getting nearly 100 in total on two islands. The researchers then measured their forelimbs, hindlimbs, and core body lengths. The teams then took pictures of the lizards' toe pads.

“The prediction was that if we saw any changes, they would be changes in the features that help lizards hold on — they would be related to clinging ability,” Donihue said. “For example, the sticky toe pads on their fingers and toes, maybe they would be larger.”

Losos, Donihue and the team discovered the surviving population of anoles had larger toe pads on both their forelimbs and hindlimbs. The survivors also had longer fore legs than before, and the once lengthy bones between the hips and the knees on their back legs were considerably shorter. The surivors, in summary, had shorter bodies. These findings remained consistent on both island sites. 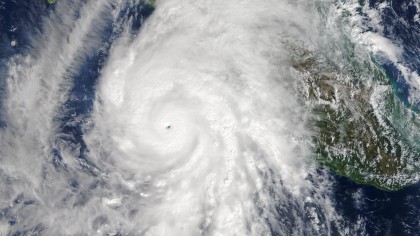 “With regard to evolution, the question is whether hurricanes cause selective mortality: do individuals with certain traits survive better than individuals with different traits? The alternative possibility — that devastation is so massive that mortality is indiscriminate, not favoring some individuals over others — is certainly possible,” Losos said.

The team said this could be one of the first studies that documents natural selection favoring individuals within a species having certain characteristics. However, the researchers acknowledge there could've been other possibilities.

“Perhaps the hurricane blew in lizards with bigger toepads and shorter hindlegs from another island. Or perhaps the act of clinging to the branches in high winds actually caused their forelegs to get longer,” Losos said. “We can’t rule these possibilities out because this study was the result of serendipity, rather than specifically being designed to test the effect of hurricanes. Still, hurricane-induced natural selection seems like the best explanation for these findings."

The team said by studying the effects these storms have on animals they're able to better understand exactly how different species survive under extreme stress.