23 Reasons Why Japan Is Already Living In the Future

Japan is an incredibly technologically advanced nation. Visiting their fair isles is like taking a time machine to the future.

By  Christopher McFadden
Sep 29, 2018
Japan is the future

The Japanese have embraced technology like no other nation on the planet. 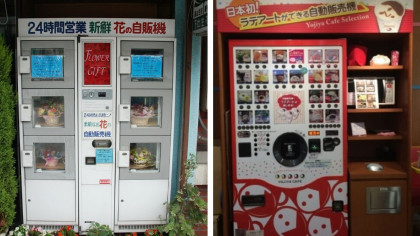 From robots to super-fast bullet trains to impressive vending machines, these citizens of the land of the Rising Sun appear to live decades or even hundreds of years in the future.

For anyone who has visited Japan, they will attest to their very different way of life.

For some, it appears they have stepped into a time portal to the far future of mankind.

The following 23 reasons are just some of the many that prove Japan is already living in the future. This list is far from exhaustive and is no particular order.

1. These Trains Are Shoe Shaped (Or Is It The Other Way Round?)

In the future, like in Japan, shoes and footwear are so intimately linked that they share design features. Clearly, this is a huge step forward (pun intended) in design and public transportation.

If you love trains, and quirky footwear design, you'll love living in the future in Japan.

2. Japanese Toilets Are So Sci-Fi You Might Forget Why You Sat Down

You might already be aware of this but Japanese toilets are renowned for their abundance of lights and features. They include features like heating the seat, checking your blood pressure, weight or urine, or simply cleaning the bowl completely spotless.

This one is a prime example but you might feel a little embarrassed to even use it. We suppose they've never heard of the concept of KISS (Keep It Simple Stupid).

3. In Japan, You Have Your Food Customised To Order

Fed up of bland 'vanilla' food grown as nature intended (ignoring growth hormones and other artificial horticultural techniques). Well in the future you will be able to have your food customized to order.

Like Pokemon? Why not have a watermelon with a Bulbasaur on it?

Perhaps Hello Kitty is more your thing? Fill your boots.

Ah, Japan. There is nothing they love more than vending machines.

From the famous 'used underwear' of yesteryear to basically buying anything you can possibly think of you can get it from a vending machine in the future.

Most restaurants, for example, will come complete with some form of vending machine for quick takeaways. The food is actually 'top notch' too.

To be honest this is actually pretty awesome but sometimes you might miss the human touch when making purchases (especially when you need help finding something or get lonely).

As we were saying the future will be full of vending machines as far as the eye can see. You will be able to buy anything at any time that your heart (if still biological) desires.

6. You Can Even Lock Up Your Umbrellas Like A Bike

The Japanese seem to be very fond of both vending machines and umbrellas it seems. Perhaps they are in short supply in the future, or perhaps, are a lost technology from the Dark Ages of Technology of the 21st Century!

Since we are not in the future here we will never know the fate of our civilizations. Clearly, such a limited resource needs protection at all times hence the need for 'bike-lock' umbrella stands.

7. In The Future Fast Food Restaurants Will Be Miniaturized

As technology progresses their tends to be a trend towards miniaturization of parts and appliances. If we follow this trend forward logically everything can be shrunk to as small as reasonably possible.

That's exactly what has happened in Japan. Even their fast food restaurants are unrecognizable to us in the past. How cute.

8. The Hotels Of The Future Will Not Have Rooms But Pods

As populations grow and space becomes an ever-increasing premium in the future the obvious solution is to pack as many people into one place as possible. This is exactly what we see in the future of Japan with their capsule hotels.

These guest houses provide you with everything you need but minus the view and luxurious space.

Now you can live out your fantasies of living sleeping like characters from your favorite sci-fi film.

The Japanese love their hotels, and robots it seems. Some even combine these two great passions of this great nation by having a robotic 'front of house'.

Though we do hope they can speak English.

The bras of the future will be both secure and safe for women. Not only will they know what women feel but will only open if the woman likes the opener.

We won't go into any further detail here but we are confident you can work out the purpose of this lingerie of the future.

11. Manhole Covers Of The Future Will Be Works Of Art

The manholes of the future will not just be functional but actual works of beautiful art.

As you can see from the following images the attention to detail for such a mundane, yet vital object is impressive and worthy of applause.

Manhole cover enthusiasts are certainly in for a treat when the future finally arrives.

12. The Future, Of French Fries, Is Black (Apparently)

But did you know that they will be black in the future? No, not burnt to a crisp, but actually black in color, by design.

At least we hope that's the case…

Of course, whether you find this an improvement on the perfectly serviceable fries of today is a matter of opinion.

13. Children Will Actually Clean Up After Themselves

As any parent knows asking your children to help with chores around the house is easier than getting blood out of stone. In the future, this will no longer be a daily battle of wits between exhausted parent and sugar-hyperfuelled offspring.

Children will actually be willing to help clean up their room and schools in gratitude to their elders and learn to become productive members of society. We might also get flying pigs as well?

14. If 13 Is Possible The Football Fans Of The Future Will Be Clean And Tidy Too

Once children have been sufficiently trained to clean up after themselves the football fans of the future will also continue the trend. In Japan (and at the recent World Cup) Japanese sports fans have become famed for helping clean-up stadiums when their team plays.

15. Hospital Food Will Actually Be Edible

Getting sick is bad enough but having to put up with hospital food can make you question your decision to go to the hospital.

In the future, you might just be tempted to fain illness to be able to enjoy restaurant grade cuisine. We can't wait.

16. The Bullet Train Is The Future Here Today

Here is a more serious entry on our list of Japan currently being in the future. Don't get used to it it's actually the only one.

Japan's Shinkansen Express (Bullet Train) has been around for some time and is still one of the most advanced forms of public transport around the world.

It is very fast, looks cool and offers an incredibly smooth and stable ride. So much so you can balance a coin on its tables without it moving an inch.

17. In The Future War Machines Are Used For Decoration

In the future war will become obsolete and we will need to find new uses redundant war materiel. One possible solution would be to use them as enormous oversized decorations throughout our now peaceful cities.

Not only does this look awesome but it will serve as an aide memoir for our once violent past as a species.

18. Their Fashion Is From A Different Age

Whenever you visit Japan it won't take you long before you notice just how differently they dress there.

One particular area of Tokyo, called the Akihabara district, is especially noteworthy for their interesting dress sense. You'll commonly find people dressed in retro sci-fi gear and see other garments you wouldn't even have thought possible.

19. In The Future Food Adverts Will Actually Match The Product You Receive

There is nothing more disappointing, or should we say infuriating, than the feeling you get when receiving your food order based on the promised image. Be it burgers, pizzas or any other form of food item you often feel cheated.

Well in the future this is definitely a thing of the past. This is fantastic news.

20. Bakery's Will Be A Thing Of The Past

In the future vending machines will replace many 'sacred' and long-existing professions. One of the main casualties will be the humble and venerable baker.

No longer will you need to actually go to a bakery or supermarket to purchase bread but you will be able to get 'bread in a can' 24/7. Is this a good thing?

21. They Have Robots Everywhere

Unlike other countries in the past, Japan has robots performing duties absolutely everywhere you can think of. We've already covered those used in hotels but you can find them as shop assistants or in banks.

Some of them can even assess your mood and have 'fairly' natural conversation with you if you can speak Japanese that is.

The Japanese are absolutely obsessed with computer games. This shouldn't really come as a surprise since gaming giants like Nintendo and Sega hail from this part of the world.

Computer games are more than just a hobby for the people of the future but are a major part of their culture. This is optimized in their gaming arcades that can be un excess of ten story high buildings packed to the gun-holes with arcade games.

This is impressive enough but wait until you see some of the games! Reaction times are an absolute must with most of these are some Japanese players are absolute experts at them.

23. Automated Car Parking Is A Thing In Japan

In the future, you won't need to park your car yourself. Just take it to one of their many, many automated car parking facilities. But it doesn't end there most of these stack cars ontop of one another a bit like a giant car vending machine.

Most restaurants, hotels and other buildings have them as standard. Impressive.