From chocolate chip cookies to bulletproof material, here are some of the valuable inventions and discoveries made by women.

We live in a patriarchal world. It is no wonder that we hear more about the inventions made by men than those made by women, irrespective of how earth-shattering those inventions have been.

However, women throughout the world have contributed to humanity with their fair share of cutting-edge inventions without which, we cannot imagine our lives today.

From the chocolate chip cookies to a chilled beer, some of the most brilliant inventions worldwide have had female minds behind them.

Mary Anderson made an essential contribution to the world of cars by inventing the windshield wiper. Although she did not drive a car herself, when she saw people in New York jumping out of their cars and opening the window to see when it rained, she felt the need to do something.

That’s when she decided to invent a device that could be used by the driver using a lever. The device would swing on the windshield with a blade made up of rubber.

In the beginning, people were skeptical about its usage and felt that it might distract the drivers, but later, it became a standard norm in all vehicles. However, this invention did not come easy because no one wanted to invest in her vision initially.

She did not even get any money for her invention. Nevertheless, she persevered, and wipers have now become an indispensable part of every car.

Women scientists have definitely struggled, and they seldom get credit for their inventions.

Patricia Billings is one of the famous women inventors who invented Geobond. It is a material that is indestructible, non-toxic and fire-proof.

It can easily replace asbestos, and it is much safer. Patricia is still waiting to see how her recipe of Geobond can revolutionize the world because of its characteristic of being indestructible.

However, as a woman, she has found it challenging to make the product popular.

Inventions by women in the field of cotton and fibers are also interesting to note. Sally Fox invented Foxfibre-colored cotton.

This is an eco-friendly way of dying fabric. When the dying is done through machines, it causes a lot of pollution. So, Sally’s invention is an important contribution towards reducing the overall contamination in the environment.

There have been several women inventions that have contributed towards solving big problems. Bette Nesmith Graham has a similar story who invented the liquid paper using which the correction of mistakes after typing on the new typewriter was made easy.

She faced a lot of problems as a stenographer. So, she was determined to find a solution, and she did find one with her new invention.

Women scientists have made some very important contributions to society. Similarly, Dr. Mary Temple Grandin, despite her autism, made some essential animal handling inventions. She told the world how behavioral psychology could be used to handle animals instead of coercion.

Taking this principle, she invented several animal handling devices and also designed some livestock handling facilities around the world.

Margaret Knight also hits the list of some famous women inventors with her invention of the machine that can make paper bags with a flat square bottom. She faced a challenge when another man named Charles Annan stole her idea.

However, she won the final lawsuit against him and registered her patent successfully.

Stephanie was a chemist who accidentally gifted the world with her invention of Kevlar which is supposedly five times stronger than steel. It is high-tensile and lightweight.

She patented this material in 1966. It has definitely helped the world by offering a strong material that is used on construction sites.

It is easy to deduce that women inventions have played an essential role in our day to day lives.

Lillian is one of those famous women inventors who believed in improving the already-existing inventions for the purpose of ergonomics. For example, she invented the shelves in the refrigerator to make it more efficient.

Similarly, she made can openers easier, and she also invented the foot paddle for opening trash cans.

Some inventions by women are indispensable if we think about them in the present times. Marion Donovan did something similar and invented disposable diapers.

She invented the waterproof diapers first and sold it for $1 million and later, went on to design a disposable model too. This invention has definitely changed the way parenting works and has made many parents and children happy.

Famous women inventors like Josephine Cochrane had the motivation of helping people with their inventions. She invented the dishwasher to help her servants with washing dishes.

This invention is still a lifesaver for many households today.

Elizabeth Magie invented the famous game of Monopoly that is famous in every household today. Her original intent was to spread awareness about land grabbing, tax frauds, etc. through her game.

She wanted to bring about a focus on all the injustice that results from unchecked capitalism. However, in the end, she only got $500 after 30 years.

Her game was redesigned and sold as Monopoly that made millions of dollars without sharing much with the original inventor.

Women engineers have also been at the forefront of inventions. Ada Lovelace was inspired by her mother who was also a scientist. She developed ways by which mathematical algorithms could be used to carry out computer programming.

Her contributions to the current world order cannot be stressed enough. The world currently runs on such algorithms.

Grace Hopper was an American Navy rear admiral and a computer scientist. She can easily be called as a pioneer of computer programming who invented Harvard Mark I.

It is thanks to her invention that programming languages are so developed and advanced today.

Hedy Lamarr was an American film actress who went on to invent the Spread Spectrum Technology. After she immigrated to the United States, she became a pioneer in wireless communications and changed the face of communication as we know it today.

The Wi-Fi that we love and cannot live without today depends on Lamarr's "frequency hopping", and we clearly do not need to extrapolate on its benefits in our lives today. She led a frustrated and forgotten career as an inventor during the wartime, yet emerged as a winner by helping the world with her invention.

Dr. Shirley Ann Jackson is another one of those famous women inventors who is responsible for inventing the caller waiting and the caller ID.

This theoretical physicist from America put in a lot of research in the 1970s because of which, today, we are able to verify who is calling us and when there is a call waiting when we are busy with another call.

Olga is an important name in the history of inventions, although not many know of her contribution to humanity. She is responsible for inventing the nickel-hydrogen battery with a super long lifecycle that powers the International Space Station today.

Therefore, the contribution of this Puerto Rican woman in history is quite remarkable.

Marie Van Brittan Brown is the reason you feel safe in your house today. She invented the home security system.

The idea took seed in her mind when she had to spend a lot of time alone at home and wanted to do something to make herself feel safer. Therefore, to combat the ever-increasing crime rate in the 1960s, she invented the home security system with her husband.

Although the device was a bit complex and came with the camera, it led to the inventions of the sleek security systems that we know today.

Tsukamoto played an integral role in the invention of stem cell isolation in 1991. This breakthrough in the field of medicine is why doctors and researchers today are one step closer to understanding cancer patients and their blood systems.

This comprehension and insight could possibly be the key to finding a cure for cancer in the future.

1897 was the year when Anna Connelly invented the outdoor fire escape that also came with an external staircase. She patented it in the same year, and now, these fire escapes are a widespread sight throughout the United States of America.

In fact, these external fire escapes with staircases are a mandatory building safety code across America. Therefore, there is no denying the contribution of Connelly to man.

Do you like the chocolate chip cookies? Who doesn’t! You have Ruth Wakefield to thank for their invention. She owned a lodge by the name of Toll House Inn in 1930 and one fine day; she was baking batches of cookies in the kitchen for her guests when she suddenly realized that she needed more baker’s chocolate.

This is when she mindlessly broke up a chocolate bar of Nestle semi-sweet into pieces. She thought the chocolate would eventually melt during the process of baking, only it did not and led to the invention of the famous chocolate chip cookies as we know them today.

Dr. Maria Telkes invented the very first solar-heated home in 1940 when she was working at MIT on the Solar Energy Research Project of the university. She developed this solar-heated home with the help of her colleague and architect Eleanor Raymond.

This house was 100% solar heated, and the biophysicist started, what was a long journey into the depths of thermoelectricity. The house was named Dover House in Massachusetts, and it succeeded in surviving nearly three winters prior to the failure of the system.

Marie Curie is probably one of the most popular names when it comes to women inventions. She is known for her famous theory of radioactivity, a term that she coined herself in 1898.

This Polish and French physicist was merely 44 years of age when she discovered radium and polonium, two essential elements of the periodic table. She went on to win 2 Nobel Prizes which made her the only woman in history to get awarded with this decorated award for all her contribution to science.

Nancy Johnson is another remarkable woman from Philadelphia who you should be thanking if you have a sweet tooth. This woman invented the very first ice cream maker that was hand operated back in 1843.

She patented the design and surprisingly, this machine is used to date for churning and making ice creams. Let’s take a moment to thank Nancy for all the ice creams we enjoy today!

Maria Beasley, a woman from the United States of America, invented the life raft in 1882. The idea took seed in her mind when she felt an urge to do something about saving people from dying at sea. 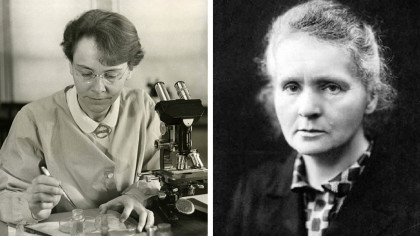 As noble as the idea was, it went on to help people with a handy product that could help us in SOS situations at sea. It would not be wrong to say that millions of lives have been saved, thanks to her invention!

These 24 women are evidence of the great heights of success they can achieve if only they are given a chance to reach their true potential. Countless other women in history have contributed to the easier and safer lives we lead today, and countless women will undoubtedly follow suit in the future!

Here Are 5 Reasons Why You Might Suck at Programming