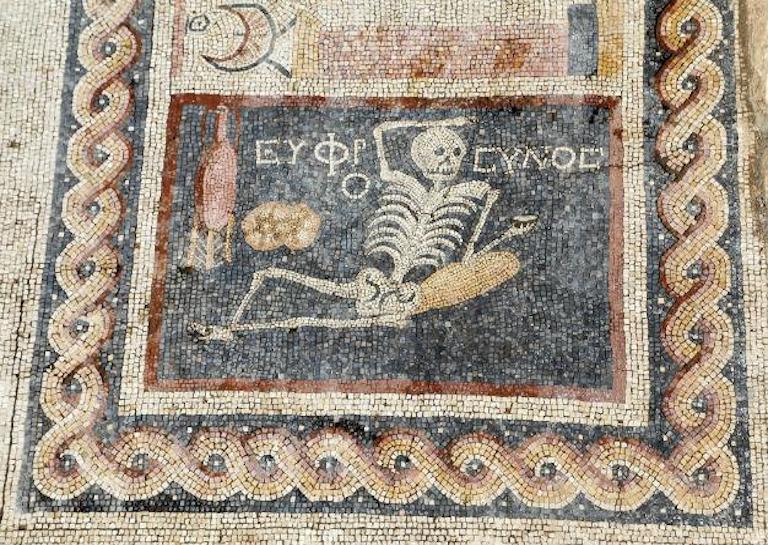 During excavations in Turkey's souther Hatay Province, a 2,400 year-old elaborate mosaic was found depicting a 'cheerful skeleton' that says "be cheerful, enjoy life," written in ancient Greek on the left and right of the skeleton's head. This piece is being considered from the 3rd century B.C. and could be one of a kind, according to Turkey's Anadolu Agency. The dig site was first discovered to contain a large amount of archaeologically significant works when human remains were found back in 2012.

Archeologist Demet Kara from the Hatay Archeology Museum believes that the mosaic was part of a dining area decoration in a home built in the ancient Greco-Roman city of Antioch. A team of researchers have studied the beautiful stone work of art and also determined that it would have been in an upper-class household of the time. Being nicknamed the 'skeleton mosaic,' there is actually a similar work in Italy, but not as comprehensive as the mosaic just found.

Historically speaking, the city of Antioch was established Seleucus I Nicator, under Alexander the Great in the 4th century B.C. Most notably, the city is considered the first place where followers of Christ were first referred to as Christians.

This mosaic marks one of the most extensive works of ceramic artistry ever found to date. It is incredibly well-preserved and will likely offer up much in terms of archaeological significance in determining the culture of the day.