Looking for some building inspiration? Look no further than these diverse house designs throughout the ages.

There's more than one way to build a house, and mankind has come up with various designs for homes over millennia. From simple huts to lavish villas, architecture is constantly evolving through the ages and across the world. 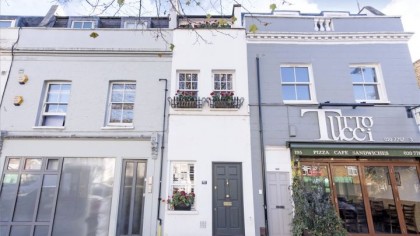 This 91-Inch-Wide Slim House in London is on the Market for $1.4 Million

Here are just a few notable examples of houses from across the world and throughout our history.

1. Ancient Greek Houses: Could Not Stand the Test of Time

Houses in ancient Greece were typically constructed from sun-dried mud brick. As this material wasn't particularly durable, houses had to be restored frequently.

The homes were usually small, with shuttered windows and tiled roofs. Because of the fragile materials used in constructing ancient Greek homes, there are no existing remains - just evidence of their foundations and layouts.

Like their Greek counterparts, ancient Egyptian homes were also built from mud bricks. Their flat roofs were supported by wooden beams, and were often used for sleeping in the warmer seasons.

The house itself consisted of one room, whose dark and cool atmosphere made it ideal for storing food and other belongings. There was a ladder or staircase leading from this room to the roof.

Typically common in rural areas, the Roman villa is recognizable for its enclosed open-air courtyard. This courtyard, known as an atrium, often featured a small pool.

Villas were usually made up of three seperate buildings; the pars urbana, where the family lived; the pars rustica, where the slaves lived; and the villa fructuaria, which served as storage for the harvest.

Often referred to in English as a Beehive Hut, the Clochán is a type of stone hut particularly associated with the west coast of Ireland. There is evidence that ancient Celts built Clocháin from as early as 700 BCE onwards, though some historians suggest that the design of the structures date back as far as 1,500 years.

The huts are usually round in shape, with a corbelled roof. They were most common in monasteries, as homes for monks.

Directly translating as "House of the People", Minka houses are among the most recognizable of Japanese architecture. Materials used in constructing Minka differed from area to area, as builders often used whatever materials were abundant locally.

Like many forms of Japanese architecture, the floorplan was traditionally measured through tatami mats. Roofs were shingled with wood, or thatched with reeds.

6. The Burdei: From Eastern Europe to North America

The Burdei is a house that combines a dug-out and a log cabin, which was popular throughout Eastern Europe. The style was brought to the North American continent by immigrants in the 19th Century.

Burdei consisted of a stove room, living room, and cellar. The walls were constructed of logs, which were then plastered with mud or sod.

Constructed from adobe bricks or limestone, Pueblo houses often featured a courtyard and could reach as much as five stories tall. The bottom floor was almost exclusively reserved for grain, with entrances to the house located near the roof.

Pueblo architecture was common throughout the southwestern United States and traces its roots back to the 12th Century.

Earthen houses use the surrounding terrain as insulation and support, merging effortlessly into the land around them. Though humans have been building earthen houses for a long time, they've experienced a renewed popularity thanks to their low carbon emissions.

Thanks to their natural insulation, earthen homes require less energy for heating. They're also structurally secure in the event of natural disasters.

9. Long Houses: A Common Style Across the Globe

Longhouses are some of the most common designs of houses across the globe, appearing in Europe, North America, and Asia. They typically consist of a long, rectangular room built from timber.

The entire structure was covered with either wooden shingles or saplings. Longhouses varied in length from 40 to 400 feet (12 to 122 meters).

10. The Siheyuan: A Building For Each Section of Society

The Siheyuan, or courtyard house, is a common feature of Chinese architectural design. This style dates back 2,000 years, and is still found today throughout Beijing.

The courtyard is surrounded by different residential buildings. The layout is based on the principles of feng shui, with buildings designated by hierarchical status.

Yurts are circular, portable tent-like structures common across central Asia. Its frame is formed from a latticework of timber or bamboo, and covered in animal pelts or felt.

Yurts usually served as homes for nomadic people, allowing them to bring their homes with them wherever they travelled. These simple houses have been used by humans for over 3,000 years.

12. The Igloo: Staying Warm in the Snow

Common among Canadian and Greenland Inuits, igloos are small, dome-shaped structures built from compressed snow. They were usually used as temporary dwellings for hunters.

Surprisingly, because the snow is so tightly packed it actually serves as an effective insulator. Meaning this snowy structure could actually keep inhabitants warm in harsh conditions.

Bamboo is an incredibly durable material, and people have been using it in buildings for millennia. Traditional bamboo houses can be found throughout the far East, particularly in China's Xishuangbanna area.

Common in South Africa, rondavels are round structures built from stones, sand, and/or soil. The homes often feature a thatched roof supported by wooden poles.

Though particularly common in South Africa, these houses can also be found in Swaziland and Botswana. Though construction methods have changed over the centuries of building rondavels, they remain a popular structure throughout Africa.

Hanok are houses built in the traditional Korean style, and were first built in the 14th Century. Shapes of the houses differ by region, but all Hanok strive to incorporate themes of nature in their design.

Traditional Hanok feature an ondol - a heated layer of rock below the floor which warms the house during the winter. Typically these houses are built of wood, straw, and paper.

16. Stilt Houses: A House Above the Waves

Stilt houses have been popular in coastal communities around the world for centuries. Not only do they protect against flooding and water damage, but also against infestations of vermin.

Today most stilt houses are found in fishing villages throughout Asia. Styles vary depending on region and climate, but typically the structures are raised atop strong wooden poles driven deep into the land below.

Tudor houses are instantly recognizable for their exposed beams and thatched roofs. Dating back to the late 15th Century, these houses were common throughout the United Kingdom in the middle ages.

During this time building materials differed greatly depending on economic class. The wealthy could afford homes built of brick, whereas the lower classes resided in wooden houses.

18. Korowai Tree Houses: A View from the Top

Built by the Korowai tribe of Papua New Guinea, these incredible tree houses are built almost 40 feet (12 meters) in the air. Though the houses usually rely on the support of a single tree trunk, it is not uncommon for them to feature additional support from wooden poles.

The houses can accommodate up to twelve people, and the roofs are clad with leaves. The Korowai tribe had no contact with the outside world until the 1970s, when they were stumbled upon by a Dutch missionary.

Log cabins began to appear in Europe during the Bronze Age. They're constructed of logs placed across one another, with the gaps filled in with earth.

In the Middle Ages, it wasn't uncommon to deconstruct and rebuild log cabins as residents moved from place to place. Today log cabins are found all over the world, and are used as homes and holiday destinations.

20. Georgian Houses: Geometric Homes With A View To Nature

Built between 1700 and 1830, Georgian houses are recognizable for their geometric exteriors and classical ornamentations. These homes can be seen throughout the UK, United States, Ireland, and elsewhere.

The Georgian era marked the move towards terraced townhouses, so it is common to see a series of houses of this style together, usually facing a square or park. Typically the basements of these houses were home to the kitchen and servants' quarters, with the upper floors reserved for sleeping and entertaining.

Belonging to many native American cultures, chickees were platformed houses with open sides. The frame was constructed from logs, while the roof was thatched from palmetto leaves.

During the colder seasons, residents would hang canvas to enclose the structure and keep the interior warm and dry. Utensils and tools typically hung from the exposed rafters of the building.

Stone cottages are common throughout the United Kingdom and Ireland. These small dwellings feature stacked stone walls and thatched roofs.

Often these cottages would contain a loft, upon which one could sleep. These lofts were accessible by ladder from the living-come-kitchen area.

23. The Houseboat: Live On the Water

Though built upon a boat, most houseboats are designed to remain moored and will not typically be sailed. Houseboats are common in coastal cities as a method of providing accommodation where land is scarce.

There are examples of houseboats in almost every continent on Earth, from Southeast Asia to Western Europe.

Built during the reign of Queen Victoria, these houses are notable for their high levels of ornamentation and influences from Gothic and Classical architecture.

Examples of Victorian homes are found throughout the UK, and anywhere that once was a British colony. These houses are also notable as they marked the beginning of a concern with sanitation, with better-designed drainage systems and waste facilities.

Tiny houses have become incredibly popular in recent years, thanks to their innovative space-saving designs and low carbon footprint. Tiny houses are usually notable for their use of sustainable energies and portability.

Common features of tiny houses are solar panels, chemical toilets, and the use of biofuels. Often tiny houses can be made out of materials such as shipping containers or other non-conventional means.