The van der Waals forces could do more than revolutionize materials science, according to physicists.

A new ultra-thin material could help create some of the world’s thinnest and most functional magnets. A team from the Institute for Basic Science reported they’ve applied van der Waals (vdW) forces to 2D materials, expanding the potential for extra-light, post-silicon electronics.

The research was published in a recent edition of Nature.

Van der Waals forces were first explained in the 1800s, but researchers became fascinated by them in recent years. vdW forces are weaker, short-range attractive forces between uncharged molecules that contribute to intermolecular bonding. It stems from the transient concentrations of electrons from one area to another. vdW forces have also been explained as the sum of the attractive and repulsive electrical forces between molecules.

These forces offer a unique type of magnetization, far different than the magnets found on the back of a standard fridge magnet. Thus, van der Waals forces can be used on different, less traditional materials -- including 2D materials on a nanometer scale.

Two-dimensional magnetic materials work by controlling the spin fluctuations. In regular magnets, magnetization happens based on electrons’ spin and temperature. In 2D materials, it’s a bit harder to control those movements.

Research lead Park Je-Geun from the IBS Center for Correlated Electron Systems explained it with an analogy.

"It is like supervising a group of restless and misbehaving kids, where each kid represents an atomic compass,” he said. “You want to line them up, but they would rather play. It is a hard task, as any kindergarten teacher would tell you. You would need to precisely know the movements of each of them in time and space. And to control them, you need to respond right there and then, which is technically very difficult."

What 2D magnetic materials could do for electronics

Physicists have been fascinated by the materials for years, Park said, namely in what they can do for maths.

vdW forces and materials could provide experimental evidence for certain mathematical-physical models that still haven’t been solved. Park said the materials gave his team the first experimental proof of the Onsager solution for the Ising model. 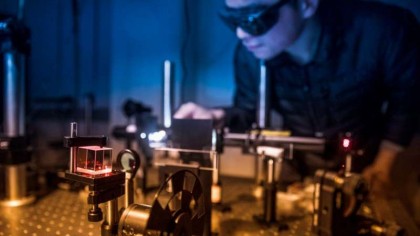 “They found that FePS3's Tc is 118 Kelvin, or minus 155 degrees Celsius, in both 3D and 2D. However, the XY and Heisenberg models in 2D have encountered more experimental barriers, and are still lacking a proof after 50 years,” the researchers explained in a statement.

The team at the Institute for Basic Science said they’re particularly interested in how vdW could unveil an exotic state of matter like quantum spin liquids -- hypothetical states of matters with disordered “compass needles” and holders of the never-before-seen Majorana fermions.

"Physicists have inherited the challenge of studying and explaining the physical properties of the two-dimensional world. In spite of its academic importance and applicability, this field is very much underexplored," Park added.

Despite the growing interest in vdW, less than 10 magnetic vdW materials have been discovered. Finding more materials remains a critical challenge for materials engineers and physicists wanting to explore how these materials can be applied to electronics.

Via: Institute for Basic Science via Science Daily

Scientists Use Human Hair to Make Displays for Smart Devices