Three American physicists have been awarded the Nobel Prize for their discovery of gravitational waves.

Rainer Weiss, Barry Barish, and Kip Thorne were also awarded the £825,000 (just under $1,1 Million) prize for their detection of ripples in the fabric of spacetime. 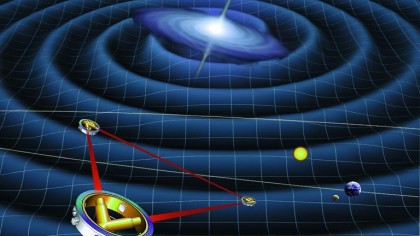 The team won't split the Nobel Prize equally, however. Renier Wiess will get half of the 9 million Kroner prize, with Barry and Kip sharing the other half.

First anticipated by Albert Einstein almost a century ago, three American scientists have finally vindicated his Theory of General Relativity. All three scientists played a vital role in the Laser Interferometer Gravitational-Wave Observatory, or LIGO, which made the historic observation in September of 2015.

Rainer Weiss is an Emeritus Professor of Physics at the Massachusetts Institute of Technology. He is an experimental physicist and made major contributions to the concept, design, funding, and construction of the LIGO.

Kip Thorne is a Feynman Professor of Theoretical Physics at California Institute of Technology. He is a theoretical physicist who made crucial predictions about what the detection of a gravitational wave would "look" like. He also worked on ways to identify the signal within any collected data.

Barry Barish is a former particle physicist at the California Institute of Technology. He is now Emeritus Professor. Barry is widely credited for getting the experiment started in the first place. He took over as the second director in 1994 at LIGO when the project was close to being canceled. Barry successfully turned things around and made sure the project was completed in 1999.

All three can now add Nobel Prize to their long list of achievements.

The team managed to observe a collision between two black holes 1.8 billion years ago! That's a time before multicellular life on Earth. They did this using a highly sophisticated detector to "listen" in on the event around 1.8 billion light-years away. One of the black holes was about 31 times the mass of the sun with the other a "paultry" 25 times.

The entire endeavor required collaboration between leading experimentalists to gather the information and theorists who could figure out how to decipher it.

The two objects eventually collided and merged to produce a new spinning black hole about 53 times the mass of our sun. The remaining 3 solar masses were converted into gravitational-wave energy during the event in a fraction of a second, that's one big bang!

The gravitational waves discovered are oscillations in space-time created by the collision of the black holes.

The trio was hotly tipped as potential winners ahead of time, so it probably wasn't a massive surprise to them. The detection of the waves, which was actually announced in 2016, ended almost a century of speculation.

It was also the climax of 25 years of development and refinement to build instruments sensitive enough. so sensitive, in fact, it needed to detect a distortion a thousandth of a diameter of an atomic nucleus over a 4km length of a laser beam and mirror.

This monumental discovery is incredible in its own right, but it is also managed to confirm that these waves travel at the speed of light. Their speed had previously only been theoretical, but now they have real data to prove it. This will open doors for further research in gravitational waves.

The discovery was celebrated by peers

Professor Alberto Vecchio, of the University of Birmingham, was another team member at LIGO. “This is transformational,”  he said told The Guardian, when the team first announced their findings.

“We have observed the universe through light so far. But we can only see part of what happens in the universe. Gravitational waves carry completely different information about phenomena in the universe. So we have opened a new way of listening to a broadcasting channel which will allow us to discover phenomena we have never seen before,” Vecchio said.

“This observation is truly incredible science and marks three milestones for physics: the direct detection of gravitational waves, the first detection of a binary black hole, and the most convincing evidence to date that nature’s black holes are the objects predicted by Einstein’s theory", Vecchio proudly stated.

The team was rightfully pleased

Wiess spoke at a press conference right after the announcement, and he was unsurprisingly pleased. He described the moment he received the phone call as "wonderful".

“I view this more as a thing that recognizes the work of about 1,000 people. I hate to tell you but it’s as long as 40 years of people thinking about this, trying to make a detection … and slowly but surely getting the technology together to do it.” Weiss said.

Weiss and his team couldn't believe the discovery at first. “It took us a long time – almost two months – to convince ourselves that we had seen something from the outside that was truly a gravitational wave.” - Wiess recalled.

Sadly, there was another key person on the team who wouldn't live to see the team rightfully honored. Ronald Drever, a Physicist from Scotland, worked closely alongside Weiss and Thorne. He fronted a very important role on the LIGO project. He died in March from dementia, only 18 months after the first gravitational waves were detected.

The Nobel Prize is not normally awarded posthumously.

The LIGO project can now proudly wear the title of "most precise measuring devices ever built" according to the laboratory's director. It is likely that their findings will lead to further confirmations of other theories abound on the creation of the universe.

For instance, what lies beyond black holes? And perhaps leaps into our understanding of a new field of physics, quantum gravity.

Finally, we would like to congratulate the team on their hard-earned Nobel Prize in Physics.

Via: The Guardian, Nobel Prize