30 Years Ago, Nintendo's Game Boy Got Us Hooked on Mobile Gaming

The Nintendo Game Boy may not have packed much of a punch as far as specs go, but it gave the world the first truly mobile gaming experience.

Today, Nintendo’s Game Boy console celebrates the 30th anniversary of its initial release to the Japanese market, the first step in the journey to bringing portable gaming to the masses.

The Nintendo Game Boy console wasn’t the first attempt at portable gaming by any means, but its first market release 30 years ago today was an epochal shift in the way video games were played.

Until the Nintendo Game Boy, handheld video games were trash. Anyone who ever played a handheld “version” of a popular arcade game before the Game Boy was released can testify that it was bordering on fraud to market these games as legitimate ports of anything. These handheld, single-title “video games” featured movement and other action played out on a screen that rely on the same LCD electronics that power the displays used on pocket calculators, digital clocks, or the readings on the pump while you fill your car with gas.

RELATED: HOW NINTENDO'S 10NES CHIP SAVED CONSOLE GAMING FROM ITSELF

Hold them up to the light at the right angle and you could literally see all of the different LCD diodes like it was a pocket sized quantum mechanics; Donkey Kong looked like a four-armed monster who was both throwing a barrel and not throwing it; Shinobi the Ninja existed in a state of superposition in a dozen locations at one time which were also the only positions he would ever occupy.

All programs naturally have a limit on what they can and cannot do, but games back then were downright fatalist. Pick up one of these devices in the toy-store and with a single glance you could actually see everything that you could ever hope to experience by playing it. Even as kids we knew these things were crap, but this was all there was at the time, and through the power of marketing we convinced ourselves that we were somehow really playing Double Dragon if we didn't think about it too hard.

The Nintendo Game Boy wasn’t that at all. 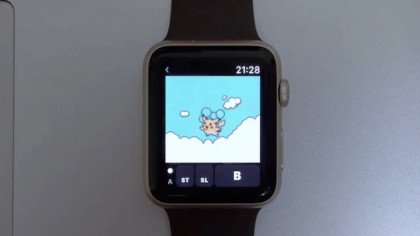 It had pixels just like a television screen, meaning even with a fairly low frame rate, there was still actual movement and a feeling of control. It only had a handful of colors, all of which were some shade of olive, but there was actual animation. The thing weighed the same as a cinderblock by today’s standards, but that was fine because back then the only other thing we had as far as mobile excitement was throwing small rocks at someone's house and fleeing the scene before we got caught or rolling a hoop down the road with a stick.

It used 4 AA batteries as its power source, but you could at least replace the batteries. Some "games" back then used watch batteries that couldn't be replaced, so I have to imagine this was a problem if you ever drained the battery down, though I don't remember anyone being masochistic enough to test the battery life on them. The Game Boy meanwhile would chew through those 4 AA batteries in 8-12 hours of play time if you were lucky, at which point you had to run out and buy more batteries and boy howdy, did we buy batteries.

As a technological achievement, the Game Boy console wasn’t much on paper and even at the time no one was fooling themselves thinking that the Game Boy was going to be anything like a home console game, much less one in an arcade. But the Game Boy still let you play an actual video game that—in principle, at least—were no different than those on any other console.

Probably the most important thing about the Game Boy was that it was a console, not a one-off title. Until other handhelds, it could play any number of games and many of them were actually fun. You could bring dozens of games with you on trips and never need more than a small bag to put them all in or if you were one of those kids, you could have a fancy game holder that could store a hundred game cartridges and it would be no bigger than your typical CD binder.

Nintendo's Game Boy managed to fit the entire video gaming experience into your pocket, your backpack, or your carry-on bag. A 17-hour car ride to grandma’s house was rendered bearable overnight. People complain today that parents stick a screen in front of their kids to keep them calm and occupied while they shop or to keep them quiet during a long flight, but that parenting hack has been around for at least 30 years, as of today.

Other mobile gaming consoles existed back then that could do everything the Game Boy did and could even do it better, some even had color screens, but they might as well have been urban legends. We always heard about them, but we almost never saw them and those we did actually see nearly always had games that somehow managed to be less impressive than those put out by Tiger.

Meanwhile, the Nintendo Game Boy started coming bundled with Tetris a few months after the North American release of the console. Every one of us 90s kids can tell you the sense of injustice we felt having to start fighting with our parents because they wouldn’t stop playing Tetris on our Game Boys. These were the same people who just spent the entire preceding decade lecturing us kids about how video games were going to rot our brains.

The Nintendo Game Boy changed the way we played games as well as who played them. It was the first console to truly make video games mobile, and it hooked all of us, old and young alike. The entire multi-billion dollar mobile video game market owes its entire existence to the release of the Nintendo Game Boy 30 years ago today because after customers got their hands on it, gaming was never the same again.